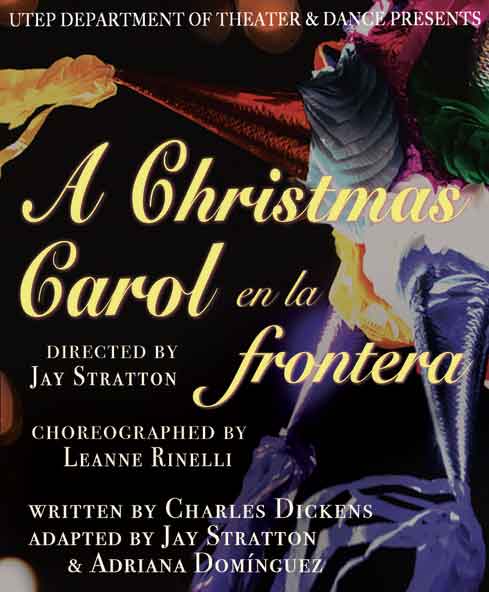 The UTEP Department of Theatre and Dance brings a borderland version of Charles Dickens’ classic story “A Christmas Carol” to celebrate the community and ring in the Christmas season.

The production of “A Christmas Carol, en la Frontera” takes place in the late 1800s to the early 1900s and will remain true to the original story about the mean-spirited Ebenezer Scrooge and his journey to redemption through visitations by spirits of Christmas Past, Present and Future

“Everyone continues to love the story— that everyone is a good person deep down, even though sometimes it takes a little more digging for others,” said Adriana Domínguez director of the UTEP theatre program.

UTEP professors Jay Stratton and Adriana Domínguez adapted Dickens’ timeless story to fit the context of the borderland community. In order to keep it true to the local region, the play will include some Spanish while the majority of the play will be told in English.

“We think that this story definitely resonates within our community and we think very often that Latinx pieces are not produced often enough and there’s not enough representation, so this is one way to do that,” Domínguez said.

The production of “A Christmas Carol, en la Frontera” is directed by Jay Stratton and choreographed by UTEP professor Leanne Rinelli. There are around 30 people involved in the production including performers and designers that remains highly populated by UTEP students along with a portion of community members and small kids as well.

Preparation and rehearsals for “A Christmas Carol, en la Frontera” began on Oct. 8, with cast and crew meeting every day to create a specialized version of the classic Christmas story.

“You never really stop learning a role. From the time I get the script in my hand to the performance I’m constantly doing work,” said Joseph Fernandez theatre performance junior who plays the role of Ebenezer Scrooge.

Fernandez says his favorite part of the production was getting the chance to interpret such an iconic and famous role into a character from the borderland.

“No matter who you give this role to, it’s always going to be different every time and I was given that opportunity to interpret it in a different way,” Fernandez said.

The UTEP Department of Theatre and Dance encourages people of all ages to attend.

“It’s filled with so much magic and spectacle, but it also has a message that hits close to the heart,” said Bianca Taylor theatre performance senior and narrator of the play. “I think a lot of people can relate to the story and or understand it, no matter what race they are.”

Tickets can be purchased at the door on the day of the shows but Domínguez advises guests to purchase tickets ahead of time as they are selling quickly.

All productions of “A Christmas Carol, en la Frontera” will be performed at the William & Marie Wise Family Theater, Fox Fine Arts Center on:

Tickets for the remaining shows are on sale for $18 for adults, $12 for UTEP students, children and $15 for Military, Non-UTEP Students, Alumni, seniors, groups of 10 or more.

Tickets for the shows can be purchased at the UTEP Department Theatre and Dance Box Office, online at Ticktmaster.com or at any Ticketmaster location.

For more information about “A Christmas Carol, en la Frontera” contact the UTEP Department Theatre and Dance Box Office at (915) 747-5118.