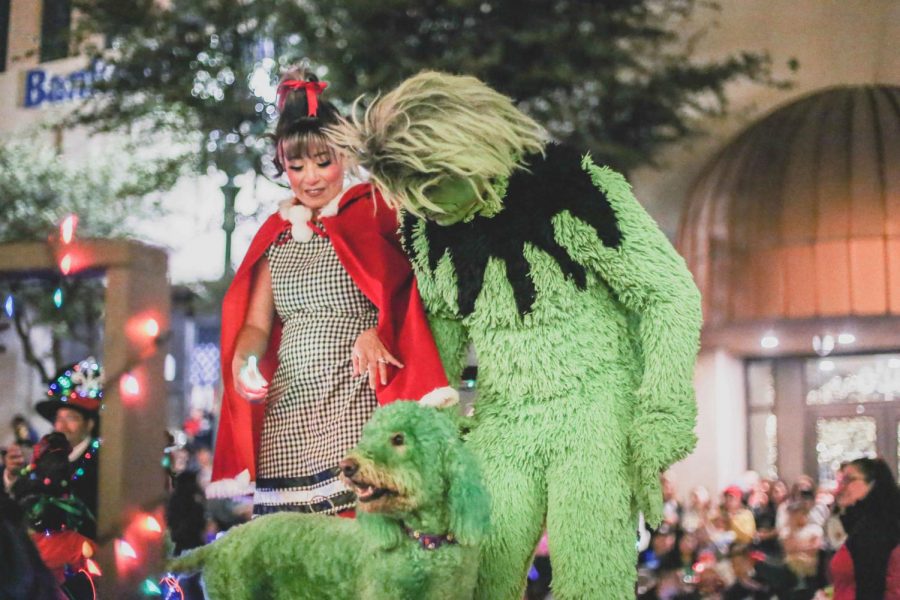 For the third year in a row, The Hospitals of Providence and Providence Children’s Hospital kicked off WinterFest in Downtown El Paso with the Scherr Legate Celebration of Lights Parade and Lighting Ceremony.

On Nov. 18, El Pasoans gathered to enjoy the holiday entertainment from the Celebration of Lights Parade that traveled through Downtown, commencing with a lighting ceremony in  San Jacinto Plaza.

“It brings people together, and it just creates a tradition for El Pasoans,” said Vianey Esparza, public affairs specialist for the City of El Paso. “It’s important that they (guests) come and see the lights, and they’re excited about it.”

The event began with performances from First Armored Division Band and St. Anthony Franciscanos Choir. Shortly after that, KVIA’s Estela Casas hosted the Holiday Lighting Ceremony, which concluded with a ten-second countdown to turn on more than 400,000 mini lights that covered 120 trees around San Jacinto Plaza.

El Paso WinterFest is known for its family-oriented atmosphere, with several different elements that turn downtown into a winter wonderland that is perfect for kids including an ice skating rink, a giant snow globe, food trucks and local vendors.

One of those vendors includes WinterFest veteran Jesus Mancillas. Mancillas has participated in the Winterfest since its debut in 2015. His business, “It is…What It Is,” includes handmade scrollwork using maple or mahogany wood.

“My work here, I don’t do it for myself, I don’t make a living out of this,” said Mancillas. “All of our proceeds go to the opportunity center to feed homeless women.”

Since 2015, thousands of people gather in downtown to watch the lighting of the plaza and cheer on the parade to celebrate the holiday season, but every year there are always first timers.

Yanet Velasquez, a mother of two, has lived in El Paso for about ten years and has never attended WinterFest but said she is overjoyed with her family’s first time experience.

“It’s nice, I like it,” Velasquez said. “It’s our first time and they’re having fun and I think we’re going to come back next year.”

The trolleys are not to be mistaken with the newly inserted streetcars that run perpendicular on Stanton Street.

El Paso WinterFest will run from Nov. 18 to Jan. 6

Ashley Johnson may be reached at [email protected]