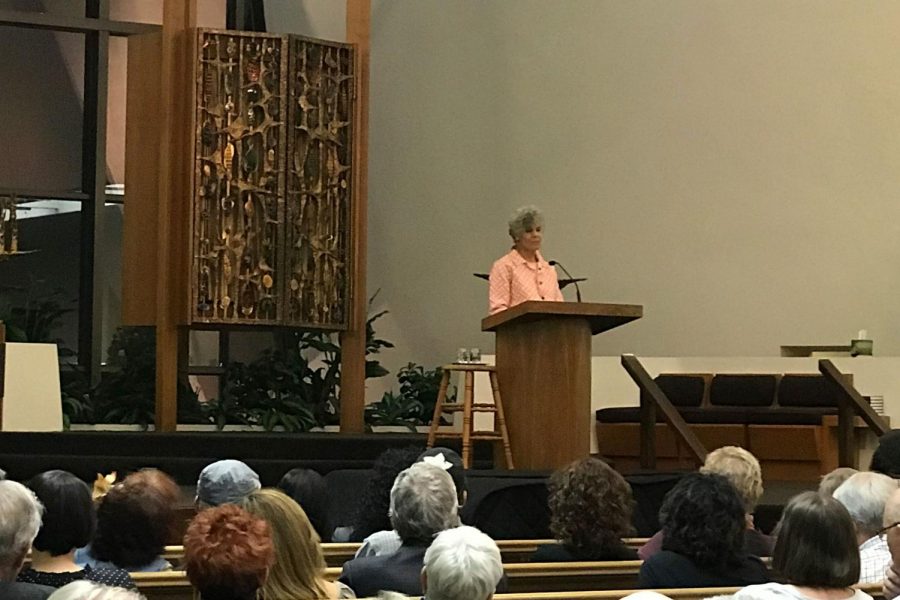 Nationally renowned broadcast journalist Susan Stamberg spoke for a one-night-only speaking engagement on Nov. 8, at Temple Mount Sinai about her series and research of the “Jews of Shanghai.”

Stamberg began the event by thanking her hosts for showing her El Paso and even cracked a few jokes about her experience seeing thousands of military troops confronting evil immigrants on the border.

“I’m making all this up—you’re not supposed to lie in a temple. Forgive me,” Stamberg said while looking up to the ceiling. “Where ever she (God) is.”

Stamberg then began addressing the current immigration issues and connecting the struggle of southern immigrants to Jews, and their constant fight as immigrants through history.

“Our faith demands compassion for strangers—as we are experienced of being travelers from another land, is stapled into our DNA as Jews,” Stamberg said. “We have to help, as you are doing to the people that are migrating.”

Stamberg congratulated and encouraged the crowd to continue their work to support immigrants and began the topic of the “Jews in Shanghai” with background information about the subject.

“Frist as we say in radio, Shanghai,” Stamberg began.

The story of the Jews of Shanghai, China began during World War II when 23,000 Central European Jews fled Hitler and the Nazi party, and settled in Shanghai when Japan bombed Pearl Harbor.

Stamberg’s series “Jews in Shanghai” is a Holocaust story created and told by Stamberg based off of around 60 interviews with Shanghai Jews and family members of them from all over the U.S.

To an old friend from junior high school to Stamberg’s NPR producer’s former high school math teacher, Shanghai Jews were constant in Stamberg’s life and widespread in the U.S.

“It turns out you found them everywhere,” Stamberg said.

Stamberg then recited the story she told on NPR many years ago about the thousands of Jews trapped in Shanghai ghettos for nearly 10 years and their remarkable ability to remain hopeful.

“Many of the elderly died almost immediately from Asian diseases, others grew thin and ate at soup kitchens—some never got out of this slum where they had been sent to settle, others were able to rent apartments outside of that district,” Stamberg said. “But very gradually, out of the rubble, they began to build a little Europe there.”

Following her talk, Stamberg received a few questions and compliments from audience members during a dessert reception to end the evening.

Stamberg is a legend in the world of broadcasting as the first woman to anchor a national nightly news program and has won every major award in broadcasting—even being inducted to the Broadcasting Hall of Fame and the Radio Hall of Fame.

“It’s an amazing opportunity to listen to someone like her, I feel a little star struck,” said Jamie Flores executive director of the El Paso Holocaust Museum.

Now she serves as a guest host on All Things Considered and Weekend Edition/Saturday while also reporting on culture issues for a variety of NPR programs at the age of 80-years young.