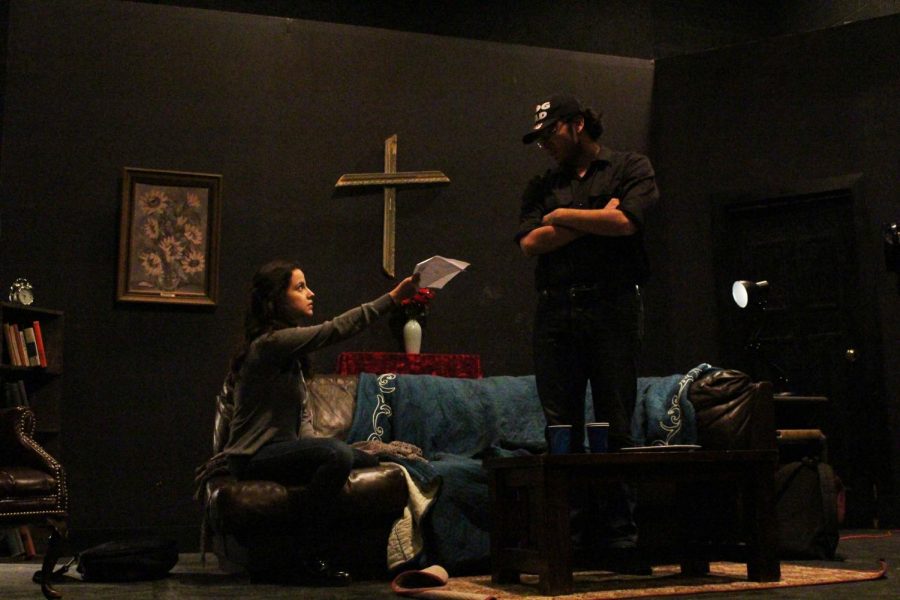 The play takes place on the porch of a Texas house and tells the story of two teenagers, Whitney and Carlyle, who go through a phase of discovery through religion and lust.

As a theater performance major, Kull has participated in different UTEP productions as an actor, but this time he decided to take on a different route by leaving the stage to become the director of this play.

“This is actually one of my favorite plays ever, I did a scene from it for my directing class last year and there’s usually a student show every year, and no one applied so I said ‘ell, why not?’,” Kull said.

According to Kull, studio shows are student-driven, with a full cast, director, stage manager and a full production built by students.

“Stonewater Rapture” was not the only show for Kull and some of the participants, making this play an extra project to run with and some difficulties along the way.

“Time management was one of the greatest difficulties because this is technically an extra project, especially when a lot of the university stuff comes as a priority,” Kull said. “When we started rehearsing, we were only rehearsing for an hour when normal rehearsals are usually from six to 10 or five to 10, but we were only able to rehearse from five to six or four to five. So we had to get a lot done in a short amount of time.”

Time management was not only of the adversities for putting this project together. For performing arts senior and lead character, Cristian Barrio, time was also a challenge for the preparation of his character Whitney.

“We have not had a lot of time, which is unfortunate, and I think I can speak for a lot of actors because we always want more time with a character and with the show. We just want to do the best we can, and, you know we feel like we’ve missed something, we want to keep figuring something out,” Barrio said.

Throughout the play, Barrio’s character goes through a self-discovering phase. Whitney, who is a 17-year-old, is still figuring out his sexuality and way in life, and for Barrio portraying his character with respect was one of his main priorities as an actor.

“I want to make sure that I’m doing good to the character in transmitting how people feel to the way he feels because he struggled a lot with who he is, and you know, how he wants to be in his life,” Barrio said. “Projecting how he identifies, is something I’ve been sensitive with because I don’t want to be offensive.”

“I strongly encourage everyone to come watch it because you’re going to connect on some human level,” Barrio said. “It’s only two people, but they’re going through a lot and I guarantee you, you’re going to be able to look out and see that you’re not alone in this world.”

Claudia Flores may be reached at [email protected]