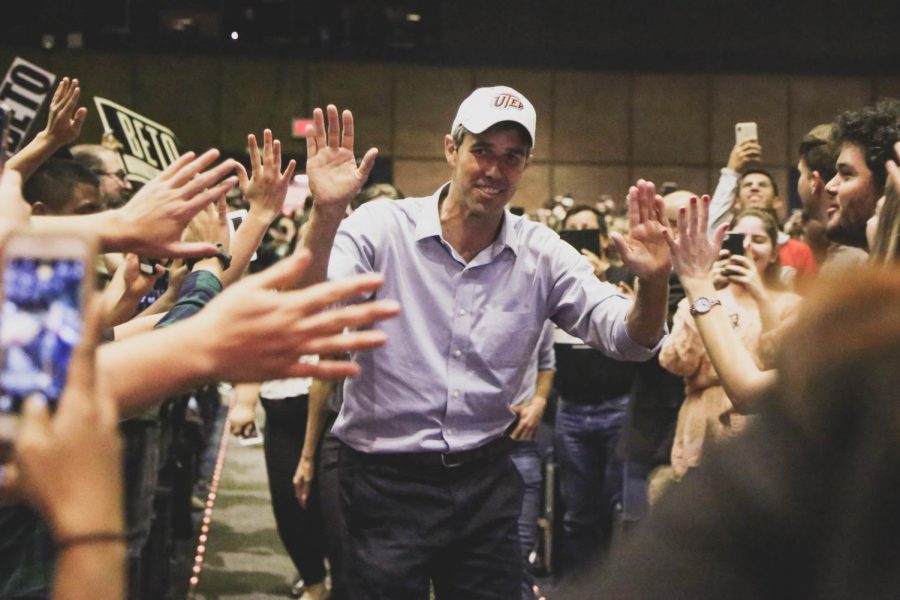 Congressman Beto O'Rourke high fives his supporters as he walks to take the stage at the Magoffin Auditorium for his final rally before election day on Monday, Nov. 5.

El Paso, TX– With only one day left in the midterm elections, Congressman, Beto O’Rourke held his final rally right in the borderland.

“Thank you all for being here, it has been so long since I’ve been back home, here in my hometown. Living just blocks away from one of the greatest universities on the planet, the University of Texas at El Paso, at the most important time to be alive that I can think of,” O’Rourke said as he took center stage.

The El Paso native and his wife, Amy, were welcomed by a performance from UTEPs Mariachi Los Mineros, and a roar of applause and chants such as, “Beto! Beto! Beto!” In total, Beto spoke for about 30 minutes, touching on topics such as immigration, education, and healthcare.

Congressman Beto made sure to emphasize the importance of power Texas and El Pasoans possess when they put their party aside and work together.

“As the question hangs over this country, as to whether or not we are going to live up to our potential, and to our promise. It is the people of Texas, being led by the people of El Paso, who have the answer” O’Rourke said.

On immigration, that all people are equal and no child should be taken away from their parents at their most desperate or vulnerable moment. Therefore, he is working for policy to be rooted in the real-life experiences families have to endure. O’Rourke believes no one should live in fear of having to possibly get deported.

“We together will insist that they be reunited at once, and we will make this country and the people of the future will succeed us, the people of 2018 proud because we will take the lead in rewriting this country’s immigration laws in our own image, to reflect our own communities like this one here in El Paso,” O’Rourke said. “No dreamer, numbering more than a million strong in this country, ever has to fear of deportation because we made them citizens here.”

On education, O’Rourke spoke about reforming education. This fourth-generation Texan believes that every Texan deserves access to a quality education that will allow students to reach their full potential. As well as the interest of every educator, librarian, or school nurse is served.

According to O’Rourke, 4.3 million Texans, including over 600,000 children, are not able to see a doctor when they are sick due to not having health insurance. He spoke about the need to change that. He wants to ensure that every parent and child get the proper healthcare they need by transforming it. Some steps include improving the Affordable Care Act (ACA) by stabilizing insurance markets, lowering premiums and prescription costs, and incentivizing insurers to participate in exchanges.

O’Rourke supporters seemed to show an unwavering love for the congressman and have no doubt that he could win the Texas Senate.

“I’m very confident. I hope he does win, we need change in Texas and I believe Beto can be that change,” said UTEP student Natalia Escobedo.

There has been a 500 percent increase in young voter turnout from 2014-2018, which is a substantial improvement given that Texas is traditionally one of the lower-ranked states in terms of voter turnouts. O’Rourke even inspired future voters to value their right to vote when they turn 18.

“It influenced me a lot and gave me a lot of hope. At first I was a little doubtful, but I think we can do this because he’s been getting a lot of support,” said 8th grader Shayla Cohen-Jones. “I’m for sure going to vote when I’m able to.”