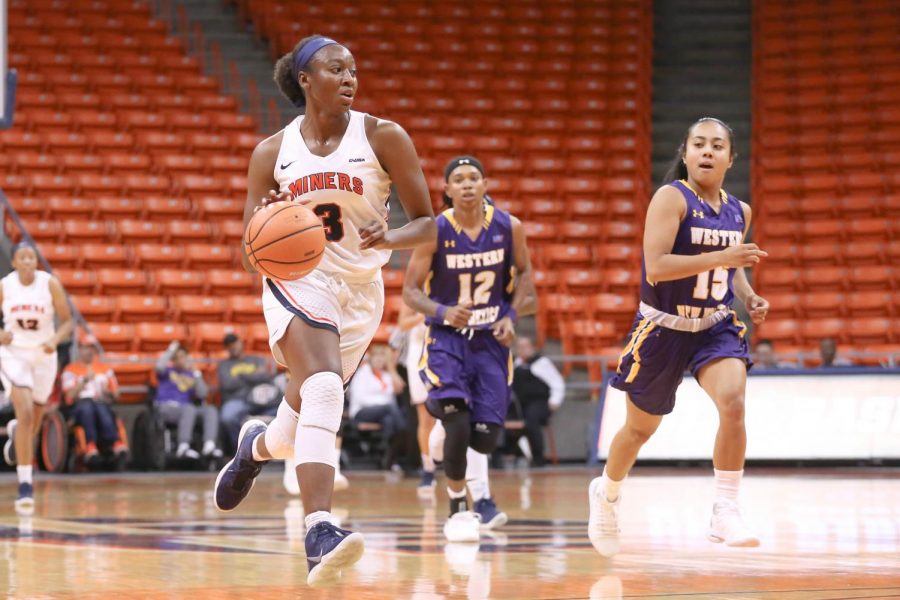 Senior forward Jordan Alexander finished with a team high of 17 points at an exhibition game against Western New Mexico on Saturday, Oct. 27.

UTEP women’s basketball opened up their exhibition part of their schedule with a 64-45 win over Western New Mexico on Saturday, Oct. 27, at the Don Haskins Center.

“I thought it was a really good scrimmage for us,” said head coach Kevin Baker postgame. “It was exactly what we needed. We’ve been playing each other for so long it felt so good to play somebody other than ourselves.”

The Miners had two players in double figures—junior forward Ariona Gill had 14 points and senior forward Jordan Alexander had 17 points to lead all Miners.

“We need to learn how to play with fouls,” Baker said. “I thought there was three or four of us that got into early foul trouble they didn’t really adjust the way we were playing. Sometimes when you get in early foul trouble we have to play smarter and not take as many chances, I’m not sure we did that, but I’m really happy that happened on a Saturday scrimmage day in October. That’s where we learn that and we can address it as a coaching staff and hopefully get better.”

In the second half, the Miners were outscored by three points to start the third quarter. UTEP was out rebounded in the third quarter as well, 10-eight. Western New Mexico guard Paulina Rodriguez lit up the Miners from behind the arc nailing all three of her attempts.

“What’s glaring to me was our inability to rebound at times,” Baker said. “We’re going to have to be better on the boards, both offensively and defensively through the course of the year.”

Other notable moments from the exhibition

Junior guard Jade Rochelle came off the bench and scored six points while leading the Miners in rebounds with eight. Junior guard Neidy Ocuane, who was one of two redshirts from last years team were inserted in coach Baker’s starting five—Gill, Alexander, Zec, and junior Zuzanna Puc were the remaining starters for the Miners. Gill was the other redshirt from last season.

UTEP edged out Western New Mexico of bench points and fast break points, 13 and 23 respectively. The Mines finished the game with 11 assists and shot 47 percent from the field.