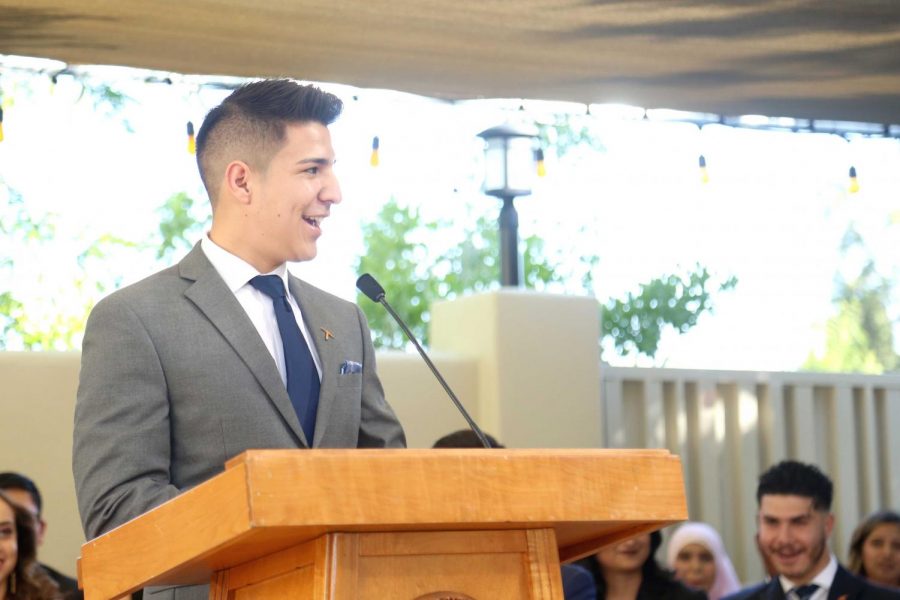 In light of the campus pharmacy closure, UTEP Student Government Association (SGA) is proposing that the pharmacy continue to operate under a Class D grouping with a proposal written by President Cristian Botello.

According to SGA, this proposal will consider all facets of the university and will be beneficial to student’s demands.

As the pharmacy plans to close on December 14, 2018 as a result inconsistent usage by students and further increased Health Center costs, the nearly 1,500 UTEP students who depend on the campus pharmacy may not receive low-cost medications, SGA representatives said. Their solution to keeping the campus pharmacy up and running is to change the classification of the pharmacy from a Class A pharmacy to a Class D.

SGA claims that the change in pharmacy classification will “significantly drop the operating costs” of the pharmacy and still allow students to receive the attention, items, and medication that they need. As mentioned in SGA’s business proposal, the most frequent drugs at the campus pharmacy are not controlled substances. Instead, they are medications that a Class D pharmacy can manage. Due to this, SGA believes that reclassifying the campus pharmacy to a Class D would be more suitable for everyone at the university.

The Student Government Association (SGA) is proposing an alternative to the closure of the pharmacy which consists of changing the pharmacy from a class A to a Class D. This proposal keeps in mind all aspects of the University and benefits the students, the Health Center, and the College of Health Sciences.

The goals of the SGA at UTEP are to represent and voice the concerns from the students at a university, city, and state level. In recent weeks the student body has voiced their concerns about the closure of the campus pharmacy. Student Government Association believes in affordable and accessible health care for all students. The Student Government Association is highly suggesting to keep the pharmacy open and change its operating class from a Class A to a Class D. This proposition, if enacted, will allow the University to cut costs immensely, while still affording the opportunity of an accessible and affordable healthcare option to students.

The pharmacy is set to close on December 14, 2018, due to inconsistent usage, maintenance costs, staffing, and other increased Health Center costs. The College of Health Science concluded to close the pharmacy due to a financial decision to save money for the center as the pharmacy continually operated at a monthly deficit. Consequentially, the approximately 1,500 students who depend on the Health Center, as reported by the College of Health Science, will no longer receive low-cost medications and will be stripped of the convenience of an on-campus pharmacy. As a public serving institution, it should be the administration’s main concern to provide affordable services, such as pharmaceutical needs, to its constituents, which in this case are the students. Closing the pharmacy does not promote this civic agenda, and does not benefit the students already using this service in any form.

The solution the Student Government Association is proposing is not to close the pharmacy, rather to change its operating class to better meet the demand of the students who use it, while still allowing the Health Center to allocate funds to other services. The Pharmacy is currently operating as a Class A pharmacy similar to the pharmacy at the University of Texas at Austin. According to the Texas Board of Pharmacy (Subchapter A.a.1.A), a class A pharmacy must operate with at least 1 pharmacist who is employed on a full-time basis, which increases operation costs. In comparison, according to The Texas Board of Pharmacy (Subchapter e.a.1), a class D pharmacy only requires a pharmacist who is employed under a written agreement, at least on a part-time basis or contract. There are several universities in the UT System similar to our population that use a Class D pharmacy such as The University of Texas of Dallas and The University of Texas of Rio Grande Valley. In comparison, these pharmacists are paid on a wage basis or as a contractor, which is a significantly lower cost than paying for a full-time pharmacist. According to the Government Salaries Explorer, the pharmacist at UTEP is compensated $112,750, not including benefits. In comparison, according to the Health Center Director Lea Aubrey, the pharmacist at UT Dallas is paid as a contractor on a monthly visit basis at $75 per visit which equates to an annual salary of $900. The pharmacist at UTRGV is paid, according to the UTRGV Health Center Director Rick Gray, a weekly rate of $200, which totals to an annual salary of $10,400. In the case of UTRGV, the health center operates with a part-time pharmacist and pharmacy technician. A pharmacist technician is not needed; however, the position is an inexpensive alternative to having a full-time pharmacist.  A transition from class A pharmacy to a class D will significantly drop the operating costs, while still allowing pharmaceutical services to be readily accessible to the students of this University.

Class D pharmacies are limited in the type of drugs they carry, hence further decreasing operational costs, as controlled substances require a higher maintenance costs. The medications most in demand on our campus are birth control, antivirals, and antibiotics, as seen from documentation provided by the Healthcare Center attached in this proposal. A transition to a Class D pharmacy will still allow these popular medications to still be available to students. As seen in the attachment, the most common drugs are not controlled substances rather medications that a Class D pharmacy can handle. As evidenced, transitioning from a class A to class D pharmacy will align the pharmacy with the demand of the students.

Rather than completely closing the campus pharmacy, The Student Government Association believes that the most agreeable solution is a switch from a Class A to Class D pharmacy. This will ensure that unnecessary costs are kept to a minimum, while still providing a fundamental healthcare resource to our student population that depends on the campus pharmacy. A transition to a Class D pharmacy is the correct solution to meet the pharmaceutical demands of this University. It is imperative that the students of this University have access to fundamental resources, like an accessible and affordable on-campus pharmacy, so that they may continue to thrive academically and represent the University to the best of their ability.