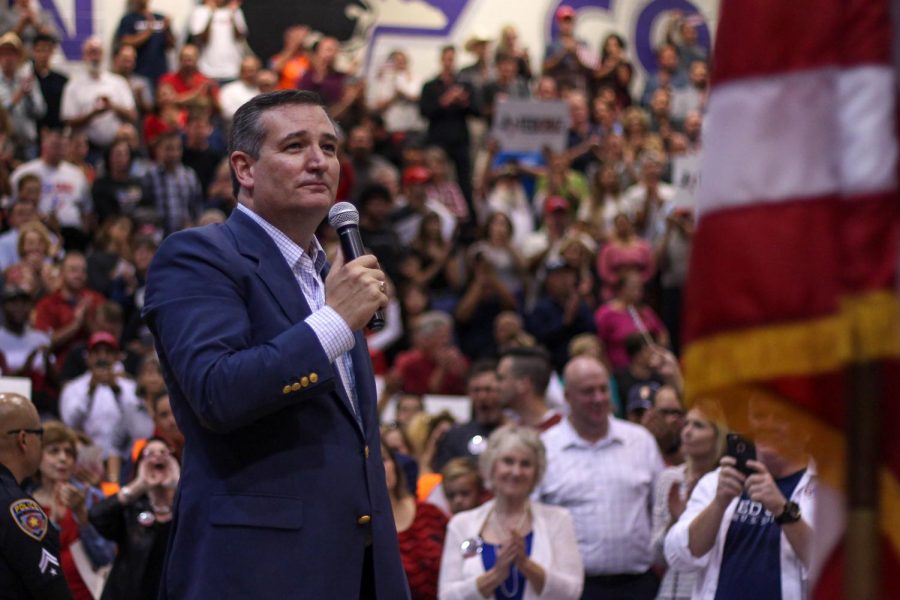 El Paso, TX–In front of a capacity crowd at the Franklin High School main gym, GOP Sen. Ted Cruz rallied his constituents in what seems to be his final visit to the Sun City before the Nov. 6 midterm elections on Saturday night.

Cruz was scheduled to make a campaign stop late last month on Sep. 28 at the Sportsmen’s Elite Archery and Gun Pro Shop but had to postpone due to the Supreme Court nomination hearings in Washington D.C.

“It is great to be back in El Paso,” Cruz said to a media scrum prior to his rally. “It is great to be with so many friends and see such a tremendous turn out this evening. I am looking forward to visiting with a whole lot of people out there.”

Due to a delayed Southwest flight, Cruz addressed the crowd 35 minutes after the initial 8:30 start time. Prior to his opening remarks, the near 2,000 in attendance could be heard chanting “Cruz, Cruz, Cruz” in unison. In total, Cruz spoke close to an hour, mixing in light-hearted remarks with serious condemnations about his opponent Rep. Beto O’Rourke (D-Texas) and the media.

“The media told me there weren’t any conservatives in El Paso,” Cruz said as part of his opening remarks as the crowd responded with boos in disapproval of Cruz’s sarcastic statement.

What media Cruz was referring to is unknown. Despite one fiery exchange in the preceding media scrum before he stepped on the podium, no reporter in the scrum made such statement.
A Man on Message
Three of Cruz’s biggest talking points on the night were unemployment, taxes, and immigration. Three issues where Cruz and O’Rourke have very little common ground.

Adding to low unemployment rates amongst African-Americans and Hispanics, Cruz stated that youth unemployment—that is, people under the age of 30, is at it’s lowest in 52 years.

On taxes, Cruz claimed to have been at the forefront of fighting one of the biggest tax cuts a generation has seen. Additionally, he worked to decrease regulation of businesses in Texas, thus, creating more jobs and cutting down on unemployment. According to Cruz, O’Rourke is moving the opposite way. Cruz told his followers that O’Rourke had voted in favor of a ten dollar-a-barrel tax on every barrel of oil produced in Texas, and Cruz claims that a tax of that stature would only hurt the people of Texas.

“And a ten-dollar-a-barrel tax on every barrel of oil would hurt the people of Texas,” Cruz emphasized.

On the issue of immigration, Cruz said there is a “right way” and a “legal way” to enter this country, using the example of his father immigration story from Cuba in 1957. Cruz would go on to speak for support of building a border wall and criticized O’Rourke for his stances on immigration.

“[O’Rourke] opposes a wall. Not only that, he thinks we should tear down the border walls of Texas we already have,” Cruz said. “He supports sanctuary cities. And he said he is—these are his words—open to abolishing ICE.”

The Republican incumbent described his opposition’s views on immigration as “radical and reckless—and that ain’t Texas.”
Cruz supporters vary in confidence
“I am very confident,” said 48-year-old retiree and Cruz supporter Terry Valle. “I know being in El Paso, which is a more Democratic city, but I think what Trump has done and with what Ted Cruz stands for, I think we are going to have a huge turnout in El Paso. There is no doubt in my mind that Ted Cruz is going to win Texas.

Although Valle’s confidence was well represented at the Rally, not all Cruz supporters could speak with the same certainty.

“From the (2016 Presidental Election) you can’t rely on polls,” said 37-year-old Educator and Cruz supporter Tomas Sigala. “Everyone said Hillary (Clinton) was going to win and (Donald) Trump won. It’s the same thing here. Even though Ted Cruz could be ahead in the polls I still don’t believe it until people go out and vote.”

Despite what he feels as a lack of acknowledgment from state representatives for El Pasoans, Sigala felt a collective togetherness at the rally with like-minded people who share the same values.

“I think it’s great for Ted Cruz to come out to El Paso,” Sigala said. “There are a lot of supporters here although this part of the state gets ignored from state legislators, even the U.S. government. There are people here that have the same values and want to share that through this collective celebration of politics and government. This is what makes us America. The ability that we have a choice and were able to say this is our candidate and this is who we want.”
The Polls Indicate Cruz
Much of the fervor and media attention surrounding the Cruz-O’Rourke race is the unusual competitiveness of the race. Texas has been long known as a red state that rarely if ever faces combatants and fight from the minority democratic base in the state.

O’Rourke has out-raised Cruz by a substantial margin with $38.1 million in total campaign contributions as compared to Cruz’s $12 million–more than tripling the Republican Incumbent’s totals.

That said, as of early last week Cruz increased his lead on O’Rouke in the polls to as much as nine points according to an Oct. 11 Quinnipiac Poll and eight points by a New York Times/Sienna Poll, with the margins of errors standing at 4.4 and 3.6 respectively.

“I’m encouraged with where we are in the campaign,” Cruz said in reference to his recent uptick in the polls. “I think we’ve got momentum. And I think the reason is the last month or so I think the people of Texas have begun focusing on this race. The first six-eight months of the race there were these breathless media profiles of congressmen O’Rourke. They were all rainbows and puppies. They were all puff pieces that didn’t discuss substance. And in the last month, the people of Texas have focused on substance. And the difference between me and Congressman O’Rourke is stark.”
The Texas Streak
Texas has the distinction of being the longest held state to go without electing a Democrat to statewide office–24 years to be exact.

The last Democrat to serve in the U.S. Senate from Texas was Bob Kruger in 1993. Kruger’s tenure in the Senate was short-lived–serving less than five months before losing to Republican Kay Bailey Hutchison in a June 1993 special election runoff.

“The message is simple, Texans in El Paso and across the state believe in common sense principals,” Cruz said. “We believe in low taxes and low regulations and lots and lots of job. We believe in securing the border, keeping our community safe, and we believe in defending the constitution and defending the Bill of Rights. Those are common sense values that bring Texans together and their values that are working.”
Protestors Out-and-About
About 150 yards up the street from the Franklin High school main gym, a group of protestors, close to 40 in total, stood with signs and pickets on Redd Rd., chanting “Cruz control has got to go” and “Hey, Hey, Ho, Ho, the NRA has got to go” to a scattered and tepid response from the passing traffic.

Gyne Rackcliffe, a 36-year-old mother, and technician at Providence Hospital showed up to protest around 8:30 with her children. An El Pasoan resident since 2001 and O’Rourke campaigner for the past six months, Rackcliffe did not want to miss an opportunity to voice her disapproval for Senator Cruz.

“I’m out here rain or shine because there is absolutely no way that we can possibly allow Ted Cruz to continue smearing a campaign that is running for the people by the people,” Rackcliffe said. “Secondly, I don’t want to see him re-elected. He doesn’t represent the people and we need a candidate that does represent the people. It’s definitely not him.”

Another protestor, Hira Ali, a 22-year-old UTEP student shared much of the same sentiment and disdain for Cruz. The biological sciences major is confident come Nov.6 that Texas can be turned into a blue state and has full confidence in Rep. O’rourke.

“I found out that Cruz was going to be here in El Paso and I thought that we should be able to voice our first amendment rights being that we don’t support our current Senator,” Ali said. “He hasn’t done anything for us to support him, especially for the people of El Paso. I can speak for the majority of us in saying that he hasn’t done anything worthwhile. We’re probably not even on his mind when he is making those decisions in Senate. I know that Beto (O’Rourke) will definitely be keeping us in his heart and mind.”

The first day of early voting by personal appearance for the midterms starts on Oct. 22.