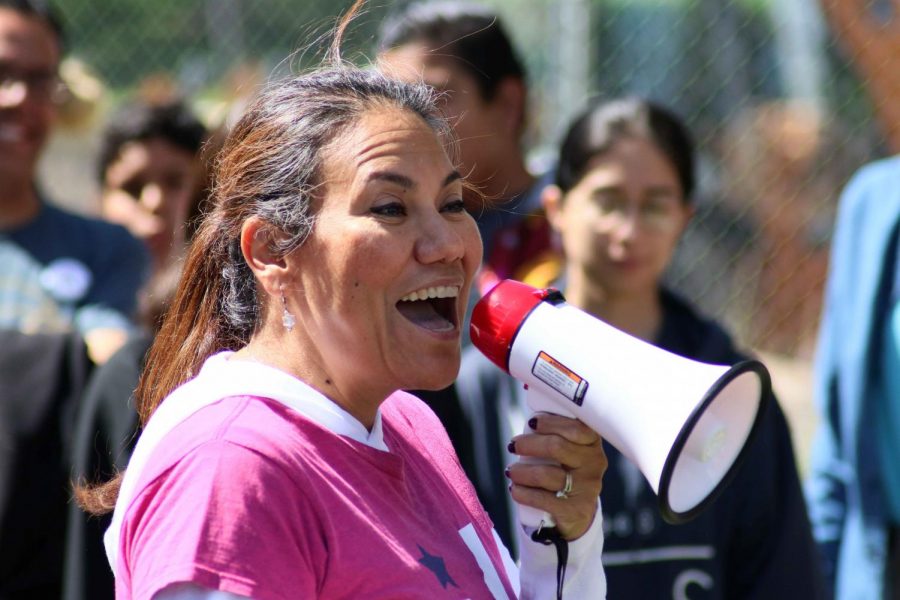 Veronica Escobar gives her endorsement to Beto O'Rourke at the Leech Grove Park on Tuesday, Oct. 9

The stakes are high for the upcoming 2018 Texas general elections, says local representatives.

Tuesday marked the last day for voter registration and Amy O’Rourke Sanders, Beto O’Rourke’s wife, along with Congressional Democratic candidate Veronica Escobar, visited the UTEP campus to rally for Beto O’Rourke and to implore students to register to vote.

O’Rourke was unable to attend his own rally, but Sanders and Escobar took over to speak to students on the importance of voting in the November elections, as they advocated for O’Rourke earlier today.

“Today we have a great candidate,” Escobar told students. “We have someone who has worked harder than any candidate I have ever known in my life. I have never known of a candidate willing to run for office and be out of his home and away from his kids for almost two years. He’s doing it for each and every one of us because he knows that we can do better. You all (students) are here because you know that same truth. You know that was has happened especially in these last two years is not just unacceptable, but it cannot go on a day longer.”

Escobar won the Democratic primary race earlier this year in March and is now challenging Rick Seeberger for the 16th Congressional seat. If she wins, Escobar will replace Beto O’Rourke in the House of Representatives.

Like Beto’s campaign, Escobar’s is just as crucial. If she wins the November elections, she’ll be the first elected Latina congresswoman. But Texas faces a problem with its voters: they tend not to vote. Like other Democrats in Texas, Escobar believes that Texas is not a red state, but a “non-voting state.”

“If we can flip the House–and by ‘we’ I mean Democrats– and if we can flip the Senate, that means we can put a stop to harmful public policy that is degrading our rights each and every day,” Escobar said. “I am imploring every El Pasoan who has the ability to vote—and obviously, today is the last day to register—I am imploring that they help us change the direction of this country. Vote for candidates like Beto O’Rourke, who will replace Ted Cruz. I’m asking for support of El Pasoans as well in order to head to Congress. And democrats, up and down the ballot, we need their support as well.”

One of the things that pushes Escobar to win a set in the House is her long-standing family history in El Paso. Her family has been in El Paso for three generations, over 100 years. Her close ties to this city are what give her a sense of obligation to work for and represent El Paso. Her experience as El Paso County Commissioner and El Paso County Judge may be what sets her apart from Rick Seeberger.

“The challenge in this race is that we’re trying to beat other records. And we’re trying to do that not only so that we can win big but to help Beto. And also, to send a message to D.C. that the border will not sit on the sidelines during such a critical election. So, our challenge is to getting to as many doors as possible in order achieve this,” Escobar said.

That message just may be received in Washington D.C. With O’Rourke’s U.S. Senate campaign gaining national attention, the values which his campaign holds are what can make the non-voters go out and vote. Sanders believes that many Texans have felt unrepresented or as if their votes don’t count. But O’Rourke and Sanders have worked to get everyone to go out to the polls.

“I hope that through this campaign everyone across the state will just see how incredibly important each and every one of their votes is in helping shape what they want their future to be,” Sanders said. “And Beto has really taken the time to not only visit [Texas’s] 254 counties, but meet with people, understand the local issues and then even within those counties, go into individual communities within those counties and talking to different neighborhoods to understand individual needs and how our federal government can improve policies that will make our lives better.”

As the deadline for Texas voter registration ends today, those who are eligible to vote could dictate who—Ted Cruz or Beto O’Rourke—will take office. As election day nears (Nov. 6), those who plan on voting can check their voter eligibility status at epcountyvotes.com.