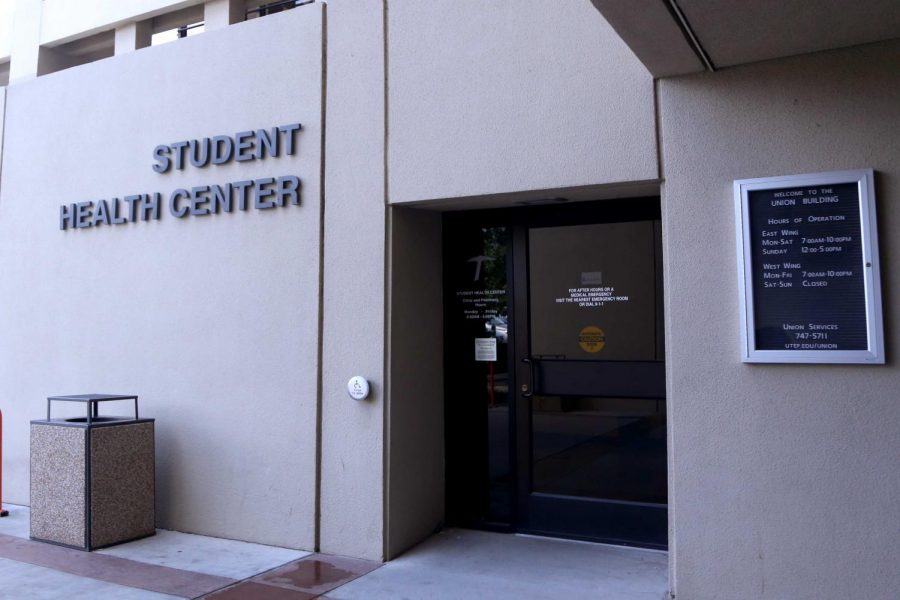 At the end of the semester, students at UTEP can no longer depend on the services provided by the pharmacy located in the Student Health and Wellness Center.

The pharmacy, located at Union Building E. 100, will close its doors after Dec. 14. The closure is due to a consistent decrease of pharmacy usage by students and an increase in the demand of other services within the Student Health and Wellness Center, per Gary Edens, Vice President of Student Affairs.

“We have seen a consistent drop in usage, by students, of the pharmacy,” Edens said. “As we look at making sure that we’re containing costs here as an institution, we look at how many students are using it, who’s benefiting, how much is the cost and if it makes sense to keep these facilities and services open. And what we were seeing over the past several years is a decrease in pharmacy usage and an increase in the demand of other things within the health center.”

Students that were sick and sought treatment at the center had to be put on a waiting list or scheduled an appointment a couple of days after their initial walk-in, according to Edens.

UTEP also charges a fee in every students’ tuition of $14.40 to cover the costs of the Student Health and Wellness Center. By closing the pharmacy, there will be more money for other services within the health center, but as of now, the fee will remain on every student’s tuition, per Edens.

“We see the demand on the one-on-one student interaction with a nurse practitioner much more in need than the need for a pharmacist,” Edens said. “So, what we thought made more sense was to close the pharmacy, use those savings to hire additional people in the health center so that students won’t have to wait, can get more immediate attention, get the services that people are asking us for.”

The pharmacy offers students and staff items that they may buy without a prescription, such as general first aids, medications for pain, fever or inflammation, for a cough, cold or a sore throat. Items like condoms, topical creams and lotions, pill cutters, tissues, eye drops and ear wax removal drops are also available. Though not every single student in the university needs these items or services, there are students who do rely on them.

Justin Esparza, a senior kinesiology major, is one of those students. He recalls visiting the pharmacy recently and finding out that it was going to close.

“The RN (at the pharmacy) had told me that ‘I don’t know if I can prescribe you any steroids because I don’t know if we have them in stock, and we can’t order anymore because [the university] is closing the pharmacy, so they don’t want us to have excessive medication,’ so it’s already affecting students,” Esparza said.

Esparza requires an anti-inflammatory steroid to ease his asthma condition,  relying  on the pharmacy to provide that prescription for him

He will have to go elsewhere to fulfill his needs, which is what a lot of students have been doing in the first place, according to Edens.

“There are a lot of pharmacies right around campus and there’s a pharmacy on almost every corner now in this city, and those are open 24 hours, they’re convenient. I think people just tend to use those more than waiting until they’re on campus to go to a pharmacist,” Edens said.

“We’ve also seen that students don’t use the pharmacy on campus on a regular basis, and so what happens, we can’t store all the medications and have them ready on a moment’s notice for when a student comes in because there are shelf-life issues with the drugs,” Edens added. “Students would come in and we wouldn’t have what they needed in the pharmacy, so it would take two days or so to go get the drugs and then bring them in.”

Edens went on to explain that the abundance of pharmacies in El Paso creates competition, which sends students to those pharmacies for their pharmaceutical needs since items are inexpensive.

One of Edens’ biggest frustrations is that the university has so many services available to students, and although the university tries everything in its power to promote these services, students remain unaware of them.

In spite of that, Esparza insists that the university must do a better job when it comes to promotion. In a tweet he shared on Sept. 25 to raise awareness about the pharmacy closure, students commented that they were unaware the campus pharmacy existed.

“A lot of people were asking me or saying anything to the effect that they didn’t even know we had a pharmacy, they didn’t know we had a clinic here. That’s another thing, UTEP doesn’t really advertise the clinic that well. I didn’t find out about it myself until maybe a year ago, and I’ve been here for three years,” Esparza said.

Concerned students are wondering how they can voice their objections and if there will be a petition to keep the pharmacy open.

According to a comment made on a Facebook post, SGA Vice President of External Affairs, Jacqueline Benavides, revealed that SGA planned on setting up a meeting with pharmacy representatives to further look into the issue and that any updates would be shared on social media.

SGA president Cristian Botello met with the Dean of Health Sciences this past week to work and provide help for students.

“When it came to the addition for the pharmacy, we need more students to make these decisions,” Botello said. “We now have a committee to meet with a group and start working on resolutions and also big announcements moving forward. We also want this committee to help better market the different resources across campus that are available to students.”

Botello emphasized the importance of transparency that he wants to see from the university to allow a healthy communication between the school and its students when there will be announcement like this.

“We’ll work with the Dean to transition students to different pharmacies, like Walgreens or CVS, and the near six percent of students that use the pharmacy department,” Botello said.

“We also want to put out polls to see what students know about across campus, and put out more marketing and students so they know what resources are available,” Botello continued. “Work on a proposal so for the future we can communicate in detail to students can understand it and know what’s going on.”

The Prospector also reached out to the pharmacy itself and was directed to speak to Letty Paez, Assistant Dean for Community and International Programs of the College of Health Sciences. She did not comment on the matter.

It is unclear whether other institutions across the state are having to make the tough decision to withdraw services within their health centers or not. Each institution differs in what they charge students.

For example, the cost to maintain the Student Health and Wellness Center in UTEP comes relatively cheap compared to other institutions across the UT System. With a charge of $14.40,  the health center fee in UTEP students’ tuitions is very low. At UT Austin, the university charges its students a $50 health services fee. UT Arlington charges its students $54.45, while UTSA charges a lower fee of $32.70. Edens does believe that health centers across the UT System may be facing underfunding issues as well.

“Student health centers typically rely on student fees and in Texas, for example, we have not raised tuition and fees very much,” Edens said. “And state support for these areas has continued to drop. So other student health centers would probably say we’re really resource poor as well.’ But other campuses may be a lot different.”

For universities like Texas A&M—a rurally placed institution with a large student population (68,000)—pharmacy services outside of the campus are scarce in comparison to institutions that are located in larger metropolitan areas.

For UTEP students and college students within the state that live in bigger cities, the dilemma of a college pharmacy closing or less funding could be consolidated by using outside resources. For students in smaller cities where the bulk of the community is represented in a student populous, that dilemma is harder to resolve.

Valdez-Rivas and Nava may be reached at [email protected]