Prospector Picks: Hottest movies and music of the summer 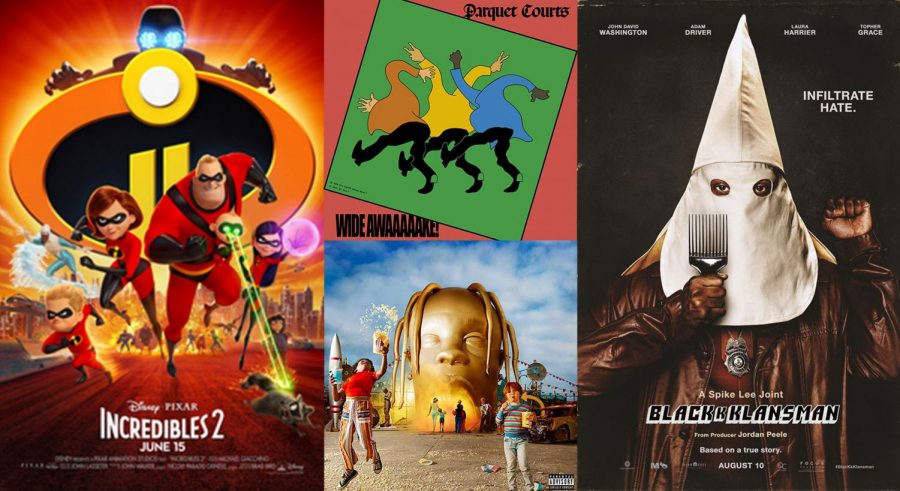 Editors Note: From relatable coming of age movies to long-awaited sequels, and from highly anticipated album releases to massive collaborations; it’s safe to say that this summer was packed with some of the best entertainment of the year. Here’s what the Prospector staff was hooked on all summer long.

Eighth Grade is not only the best movie of the summer but also the best of the year so far. It’s a film that takes you back to the most embarrassing moments of your puberty. Director Bo Burnham does an excellent job making both a funny and thrilling movie. The story immerses the audience into the life of Kayla, played by Elsie Fisher, a girl who is living through her eighth-grade year of school and has to deal with different situations that will test her confidence. The most remarkable element of the movie is how the director uses situations that we all probably experienced during this horrible age of our lives, which gives the audience a stronger connection with the characters. These situations could have occurred in our school, with our family, with our friends and Burnham uses them brilliantly to develop Kayla’s story. No doubt, Eighth Grade is another achievement for A24, an independent entertainment company based in New York City  that has produced other hits this year, including First Reformed and Hereditary.

The Miseducation of Cameron Post, Directed by Desiree Akhavan

Packaged as a sincere coming-of-age tale about an orphan discovering her sexuality during her teenage years, The Miseducation of Cameron Post delivers stunning performances and roots its relevance on the issues of today. Chloe Grace Moretz plays the role of Cameron Post, who is sent to a religious sex conversion camp after her boyfriend finds her having sex with her best friend Coley in the back of his car. Set in the early 90s, the movie attempts to explore the notion of “non-normative” sexual attraction and gender identification as pathological behaviors. Not only does the movie explain this with clarity but it also draws parallels to current conventional and ill-founded ideas surrounding progressive gender expression.

Legendary film director Spike Lee has something to say and says it loud with his new movie BlacKkKlansman. The movie tells the story of Ron Stallworth, the first black cop who eventually went undercover as a member of the Ku Klux Klan. It goes without saying that being a black cop back then was met with disrespect and racism by both the community and the department. With that in mind, this movie needs to be seen by as many people as possible. Not only is BlacKkKlansman a relevant movie for today’s times, it’s just a great story overall. It’s the perfect look in the mirror at the state of racism in America in the era of President Trump. This movie doesn’t shy away from the brutal horrors of bigotry, racism and hate crimes that might trigger painful emotions and feelings in some moviegoers. The end credits, in particular, are painful to watch. Despite the dark story, Lee is somehow able to balance the hate with plenty of humor almost flawlessly. One minute viewers are in tears laughing at Washington’s chemistry with Adam Driver — who is magnificent as always — and by the very next scene are in tears because of what some white supremacist just did on screen. Stallworth’s story very much deserves to be told and viewers should definitely prepare themselves mentally ahead of time.

“WHERE IS MY SUPER SUIT?!” is probably one of the most memorable and quotable lines from Disney’s The Incredibles. The film came out in 2004 when I was seven years old. I remember buying the film on DVD when it was released and watching it religiously. Now, 14 years later, I’m sitting in a movie theater on a Tuesday night with a glass of wine in my hand getting ready for Incredibles 2. When Disney announced a sequel to the film, I was ecstatic knowing that I could relive one of my favorite childhood films as an adult. After watching the film, it was clear to me why Disney is so good at what they do. The sequel picks off right where the first film left off. The plot was joyful yet mixed with the right amount of suspense. I was blown away by  how detailed Pixar’s animations were. Walking out of the theater, I wanted more. I guess we might have to wait another 14 years to see everyone’s favorite family of superheroes. Incredibles 2 was just as good, if not better than first.

Brooklyn-based band, Parquet Courts took it to the next level with the release of their most recent LP. Wide Awake! featuring  the band’s most eloquent and poignant songwriting to date. This is especially impressive because the music industry seems saturated with sometimes forced and aimless socio-political statements. The most notable  example of this is in the opening track, “Total Football,” which talks about social intransigence and the working class struggle. In terms of sound, drummer Max Savage and bassist Sean Yeaton steal the show with their frantic and much-improved performances. The funkification of the band’s sound builds on their characteristic garage/art punk sound. It also opens up different sonic avenues for Savage and Yeaton to catch up with superstar vocalist Andrew Savage and guitarist Austin Brown. This album also gets bonus points for being recorded at Electric Lady studios in New York City and Sonic Ranch in Tornillo, TX. Recommended tracks: “Total Football” and “Tenderness.”

Travis Scott finally dropped his long-in-the-works opus this summer, a full 27 months after he first announced its title back in May of 2016. Now that the album’s here, it’s clear what took him so long. ASTROWORLD is a staggering, ambitious and sonically boundless work; supplanting others as one of the most star-studded rap albums in years. There has not been another album with a better line-up of features in 2018 than ASTROWORLD. Not only are there big hip-hop names like Drake, Pharrell, Kid Cudi, Frank Ocean and Swae Lee, there are also contributions from Tame Impala, James Blake, Stevie Wonder, Thundercat and John Mayer. While there are a lot of forgettable tracks on this album, they’re mostly due to repetitiveness not lousy production. Executive producer Mike Dean along with Hit-Boy, WondaGurl, Boi-1da, Frank Dukes, Murda Beatz, Cardo, Sevn Thomas, Nineteen85, Sonny Digital, and of course the 808 king, Tay Keith has served a line-up of beats that distinguish ASTROWORLD from the stereotypical trap we’ve become used to in 2018. Travis Scott is often accused of meaningless lyrics and no sense of vocal value, which I sorta get — I wouldn’t necessarily say he’s a down to Earth, poetic rapper but at this point he’s on another planet.

EVERYTHING IS LOVE By The Carters

When the Carters, Beyoncé and Jay-Z, dropped their unannounced collaborative album just minutes after a second show in London as part of their On the Run II tour on a random Saturday afternoon, fans collectively listened to Queen-B talk greasy and out rap her  male hip-hop counterparts, such as Kanye West. Her husband Jay-Z matched her slick talk by calling out the Grammy’s and the NFL in the album’s second track, “APESHIT”. Throughout, the album they brag about how wealthy they are despite the obstacles in life they have gone through. Hov even addresses the elephant in the room with the track “FRIENDS”, detailing how throughout the struggles of life he has managed to keep true real friends in his circle. As the album progresses the duo discuss how fidelity almost ruined their strong relationship on the track “LOVEHAPPY.”  It’s a real track that displays how much affection the god MC has for his wife and his family, and how he was willing to do everything at all costs to keep the family from feuding — because no one wins when the family feuds. No, we may never get a Watch the Throne II, but we got the closest thing with EVERYTHING IS LOVE.

Technically this album came out before the summer even started — back in May — but that didn’t stop me from jamming to this gem all summer long. Over the course of 13 years and six albums, Victoria Legrand and Alex Scally have built quite the reputation — churning out dark, dreamy, and melodramatic insulations of noise that always earn the stamp of approval. 7 feels natural and thoughtful, yet it never over or underwhelms, containing just enough clever sonic adornment and intelligent wordplay. Beach House appears  to have done it again by doing  it differently, crafting a sonic tapestry that awes the ear yet holds steady tension with accessibility and experimentation. 7 may be the strongest dream pop/shoegaze album to land this year and a lovely way to accompany the warmer months of a continuously complicated cultural era.

Kanye West and Kid Cudi have become two of the most influential rap artists of the 21st century. Separately, they have boomed through fan’s headphones for the better part of two decades. But together, they have created the latest challenge in their respective careers, Kids See Ghosts. Fans knew that Kanye West and Kid Cudi worked well together, but the level of synergy on this album is crazy. The two complement each other so well. Whether white or black, I think we can all agree that the duo has a solid grasp of  our current cultural landscape. At 23 minutes long, Kids See Ghosts might be short, but it accomplishes so much in that time. It’s a second coming for Kid Cudi with his smooth lyricism. It shows us Kanye West still has real bars. It offers bangers built on hard drums, and it encourages you to feel your feelings and empower yourself. I was skeptical of Kanye’s logic behind the seven track restriction, but I am totally on board now. Together, Kanye West and Kid Cudi have managed to craft a cohesive sound for their joint-venture. It’s an experience that’s best enjoyed as a complete body of work from start to finish.