Botello to focus on college experience during SGA tenure 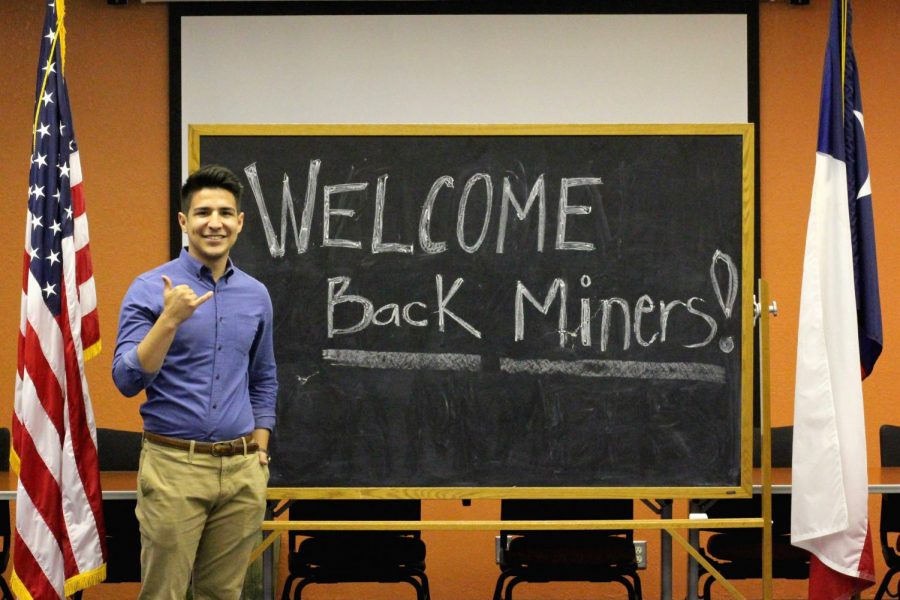 At the helm of this regime is junior psychology major and now new SGA president Cristian Botello, who is certainly not a stranger to the way SGA operates. He was elected senator-at-large in 2017, but Botello’s leadership in a UTEP setting did not start there.

“I think that I didn’t get my first real (leadership) experience until I came here on campus, here at UTEP when I joined the Lambda Chi Alpha fraternity,” Botello said. “That is when I was able to become a social chair. I had to plan different events, mixers with sororities, trying to be creative and taking on a responsibility.”

After his term as social chair, Botello looked to put his skills to the test taking on a more significant leadership role. This time within the university.

“(When) I became a senator-at-large here at student government, that is where I really got to experience the administrative part and talking with administrators, communicating and public speaking,” he said.

Previous experience within the government body is something Botello thinks of as a critical quality for those holding administrative positions within SGA. He also said that it has already paid dividends within his staff.

“If somebody is internal, I believe that they know how student government is ran. A big part of this administration was training the senators and the upcoming administration and we already have background experience in doing that,” Botello said. “Overall having those relationships with administrators already made the transition easier.”

His internal climb in office didn’t come without a struggle, as the MOVE party candidate captured 48.81 percent of the popular vote in route to the presidency.

Campaigning exposed him to student life and made him value the importance of transparent feedback. Following up on a measure implemented by the previous administration, the current regime plans on live streaming every SGA meeting via Facebook Live, as well as establishing social media accounts as open forums for students to provide criticism.

However, once entrenched in student government, student life came to take a  deeper meaning for the 21-year-old.

“When it comes to UTEP we are a commuter school, so we don’t have as much student engagement compared to other universities,” he said. “That is probably due to a lot of factors; for example, students working, or students going to school and right after just heading home instead of just staying on campus.”

The emphasis on student engagement is reflected in the types of projects that the administration has prioritized thus far.

Promises of a bigger homecoming pageant fueled by more funding, free food offered by members of SGA before the first home football game and even a debate between two of Texas’ current juggernauts (incumbent Beto O’ Rourke and and U.S. Senator Ted Cruz) are all a testament of aiming higher in order to keep students engaged.

“We think that with the initiatives that we are pushing; with the debate, with student involvement on campus when it comes to the special project of getting people to the football games, Minerfest, which is another idea that we did last year as a senator but we are gonna continue to make it better this year,” Botello said. “I think that the social aspect along with the political voter turnout, I think can get students engaged, and overall I think students’ college experience and they can get the most out of that.”

With the implementation of all of these events, Botello hopes to enhance his vision of an enriched college experience.

“I think that it is very important for students to get the college experience. That they aren’t just going to classes just to get good grades but that they are involved, they are in organizations, building leadership experience, that they can go out to events like Minerfest and hang out right before finals, to stay on campus to see what is going on,” Botello said. “I think that is what makes a good college experience, not only the academics but also that social part. That is what we are really focusing on this year.”

Eddie Velazquez may be reached at [email protected]