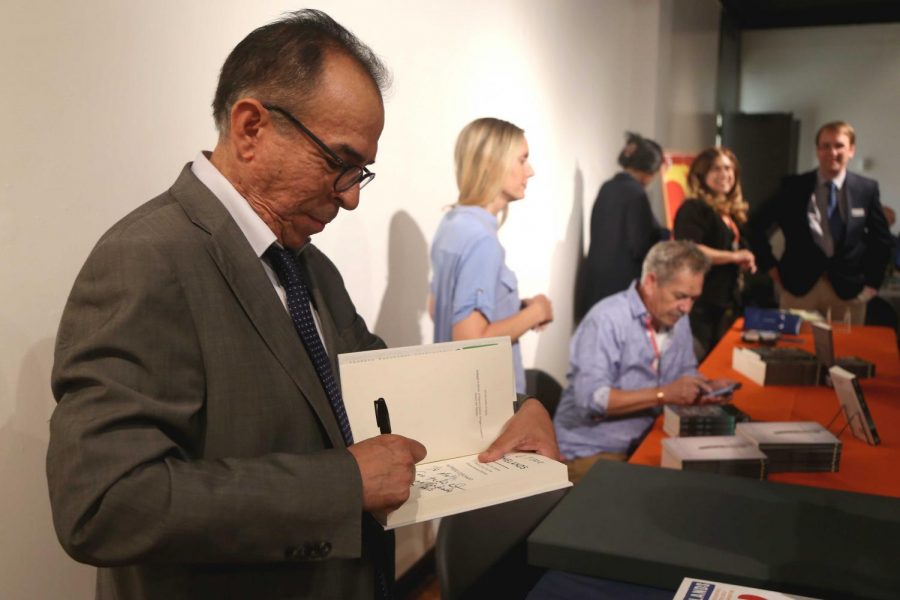 Mexico border correspondent for the Dallas Morning News Alfredo Corchado signs his newest book “Homelands: Four Friends, Two Countries, and the Fate of the Great Mexican-American Migration” before the panel discussion on Thursday, June 7 at the Union.

Immigration has long been one of the most divisive topics in American politics, but the election of President Trump has reignited the issue into something that many Americans have never witnessed. From wishes for a new border wall to the separation of asylum-seeking families, the current administration has gone to great lengths to ensure that foreigners from the south cannot establish a life in the United States.

Alfredo Corchado’s new book, “Homelands: Four Friends, Two Countries, and the Fate of the Great Mexican-American Migration,” dives into the arc that immigration policies have gone through over the years and the effects that those policies have had on border communities.

Corchado, a UTEP alumnus and the Mexico border correspondent for the Dallas Morning News, has received numerous awards for journalism. One of his awards is the Maria Moors Cabot and Elijah Parish Lovejoy Awards for Courage in Journalism, which is well-deserved, as he has been the target of death threats for years after covering drug cartels and border-related issues.

In what reads like a half-memoir and half-news piece, “Homelands” explores the difficulties and pleasures of life on both sides of the border, and seeks to answer a question that many migrants have asked themselves: How do we fit in?

It may be easy for those who do not live in border regions to overlook the effects that policies have on the communities, therefore Corchado puts together a wide-ranging narrative on Mexican-American culture that many who do live on the border will find familiar. While providing historical context for the current debate on immigration, Corchado also immerses the reader in a modern, yet personal idea of being a migrant in the United States.

The four friends in the book include Corchado, the author; David Suro-Piñera, a Mexican-born immigrant and owner of a Mexican restaurant in Philadelphia; Kenneth I. Trujillo, who runs for mayor of Philadelphia and leads a successful career as a litigator; and “Primo” Rodríguez Oceguera, who is a political activist who fights for causes on both sides of the border.

The book follows Corchado and his three amigos as they endure and reflect on the rejection and approval that Mexican immigrants are shown by Americans, businesses and the government.

The most memorable parts of the book are the ones where Corchado focuses on his family’s journey to America — hoping to find a richer life north of the border. Other notable parts of the book include the author’s progress as a young reporter in El Paso and his eventual rise to the Wall Street Journal and the Dallas Morning News.

Corchado offers broad insight into the life of a migrant trying to adjust and understand American culture, and as a journalist covering the border in a time where policies like NAFTA are being ratified and when President Reagan granted amnesty to illegal immigrants in hopes of increasing trade with Mexico.

Corchado’s personal reflections genuinely educate the reader on the broader issues that migrants have had to face over the years, such as the Bracero Program, which his father was a part of, and the lonely and homesick feelings that many Mexican-Americans feel once they leave their culture-rich communities. In a time when immigrants and journalists — among other groups — are targeted and purposely scorned, Corchado brings to life the best that the two groups offer to this great nation.