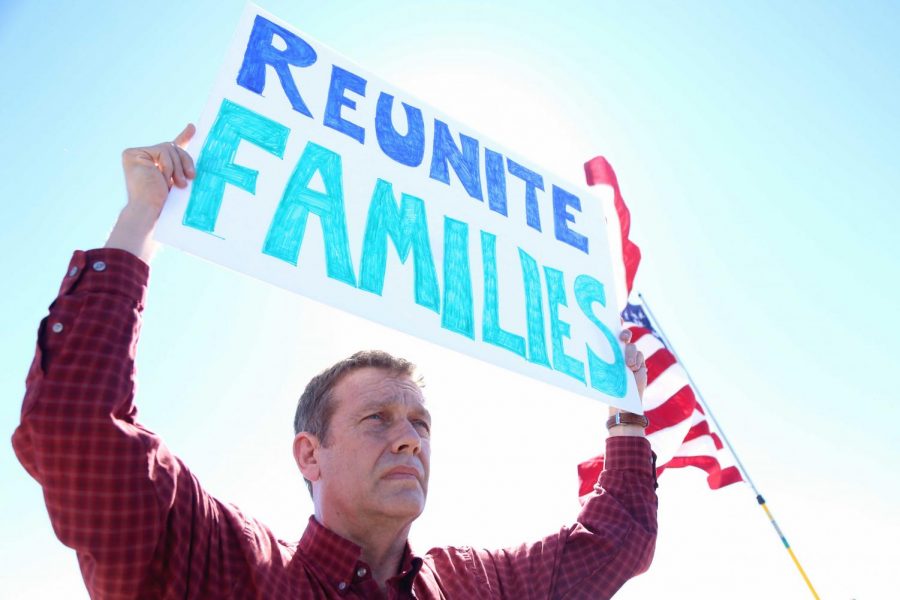 People held up signs behind the media during the press conference at the Tornillo- Guadalupe Port of Entry.

Separating families is nothing new for the U.S. Government. In 1619, slave ships from West Africa hit eastern shores in the U.S., starting the routine process of separating children from their families as they arrived at Jamestown Colony. Not seen as human beings by white slave owners, children were taken from their parents upon arrival and during slave auctions with impunity.

While simultaneously slaughtering Native American men, women and children, stealing their land and killing off their primary source of food, shelter and clothing, American heroes George Washington and Thomas Jefferson also found time to send many Native American children to boarding schools to learn English and how to be “civilized.” In 1892, Army officer Richard Henry Pratt experimented on Apache prisoners of war by cutting their hair, putting them in uniforms and forcing them to learn English. He forced them to undergo a strict educational program at a historically black college in Virginia to remove the “savage” from them for the sake of all Americans.

Recently it came to light that the Trump administration had been separating parents from their children at the U.S. border with Mexico as immigrants arrived, usually in search of refuge from conflict in their home country. There is no word on what percentage of the children have come from El Salvador, Nicaragua, Venezuela, Guatemala, Chile, Brazil or Colombia; all of which are countries the U.S. has destabilized through various means going as far back as the 1950s. Trump has since rescinded the policy–although nobody seems to know what exactly that means–there are still at least 2,000 children living without their parents, scattered around the U.S., including the much discussed “tent city” in Tornillo. On a tour of a former Walmart in Brownsville, Texas, the New York Times was assured that the nearly 1,500 boys there were receiving a quality education, religious services, medical treatment and haircuts during their stay. It sounds as if the Trump administration may have taken a page right out of the “dealing with savages” playbook on this one.

U.S. Attorney General Jeff Sessions, a “man” who was denied a Federal Judgeship because of his frequent use of the n-word and Ku Klux Klan jokes, used the Bible in an NBC interview to defend the administration’s point of view on immigrants.

“Persons who violate the law of our nation are subject to prosecution. I would cite you to the Apostle Paul and his clear and wise command in Romans 13 to obey the laws of the government because God has ordained them for the purpose of order. Orderly and lawful processes are good in themselves and protect the weak and lawful,” Sessions said to the social media joy of many Trump-supporting Republicans and Christian evangelicals.

Of course, just like the belief by Trump supporters and Christian evangelicals that Trump himself is a Christian, this was patently false and a complete misrepresentation of the writings of Paul. In fact, the same verse was used by supporters of slavery while fighting against abolitionists in the mid-1800’s. Listening to the Alabaman Sessions quote the “Appossull Paww” on NBC two weeks ago is probably as close as we will get to hearing a southern plantation owner arguing to maintain his way of life while watching African-Americans become more and more accepted as human beings everywhere that he looks.

Overlooked by Sessions–and apparently every other Trump-supporting evangelical Christian in America–are many, many, many other verses in support of immigrants.

“Do not neglect to show hospitality to strangers, for thereby some have entertained angels unawares,” written by Paul in Hebrews 13:2.

There’s also the one in Leviticus 19:33-34 that reads, “When a stranger sojourns with you in your land, you shall not do him wrong. You shall treat the stranger who sojourns with you as the native among you, and you shall love him as yourself, for you were strangers in the land of Egypt: I am the Lord your God.”

Then again, most Christians will only use Leviticus when it’s convenient for them. When confronted with gay marriage, Leviticus 18:22 and 20:13 are the go-to’s for every “good” Christian. Specifically, the loud-mouthed, Trump-supporting, immigrant-hating ones on Facebook and Twitter when talking about flower and cake shops these days. It’s a lot easier to point to those verses since, you know, the guy who put the CHRIST in Christian never said anything about being homosexual. Then again, Leviticus is used as needed when you’re an evangelical Christian.

Being homosexual is an abomination according to Leviticus 20:13. Also an abomination, eating bacon. Do you like seafood? Well, enjoy the sea bass, salmon and other fish with scales. Do NOT, however, eat any catfish, shrimp, lobster or oysters–unless you want to join the gays in HELL.

As recently as June 1, U.S. strikes have killed nearly 500 civilians in the Middle East, according to the New York Times, via the Pentagon. Leviticus forbids the spilling of innocent blood. Who pays for that when the “devil” or “god” comes calling? The point is Jeff Sessions, Trump and the nearly 63 million Americans that elected our current racist-in-chief who claim to be a Christian, know less about the Bible than I do. And I’m an atheist.

Yes, I am an atheist. An atheist who believes in the sanctity of family, the rights of human beings to life, liberty and the pursuit of happiness, and that every man, woman and child deserves the same opportunities that I was given as a white man here in America regardless of where I was born. And yes, that even means the African-American man who takes a knee during the “Star-Spangled Banner.” By the way, I am also an Army war veteran who understands that the flag is merely a piece of fabric and stands for nothing other than the rights and freedoms afforded to the men, women and children residing in the United States and that includes the right to protest.

I am not a Christian. I am not a Republican. I am not a Muslim–a minority that continues to be abused and mistreated, including by the Supreme Court of the United States. But I will stand up for the rights of all, until they infringe on the rights of others. It’s kind of like that whole “Do unto others as you would have them do unto you.” However, I like to operate off of an even better rule, not found in the Bible ironically enough. Mine is “Do unto others as others would have done unto themselves.” I will treat you how you want me to treat you, not how I expect you to treat me. Your life is your life, that is the definition of freedom; well, before Trump anyways.

The Trump administration, Jeff Sessions, Immigration and Customs Enforcement and the propaganda arm of the Trump government, Fox News, have shown a constant need to infringe on the rights of minorities at every possible turn. Thus, I continue to resist. I stand, I kneel when needed and I ask your support in fighting the good fight–and fighting for those who need us most.

Historians will look back at this child separation–and the entire Trump presidency–like they have slavery, the mistreatment of the Native Americans and many other sad points in our country’s history, including the internment of Japanese-Americans during WWII.

Please join me and be on the humanitarian side of history.