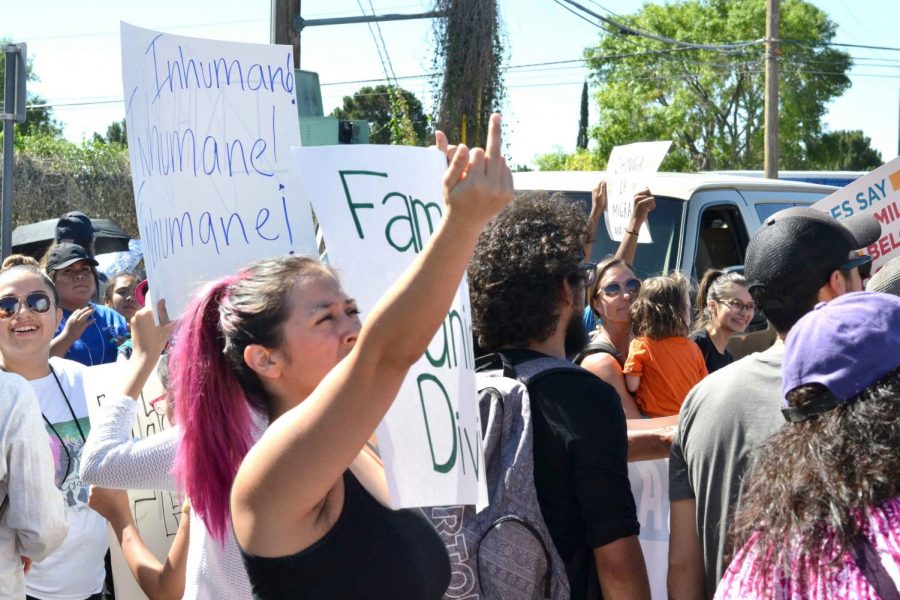 In a sea of signs and chants aimed at the protection of immigrant children, more than a 1,000 people attended the March for Immigrant Rights and Against Family Separation, on Tuesday, June 19.

The march started at Edgemere Linear Park and ended at the U.S. Immigration and Customs Enforcement El Paso Processing Center at 8915 Montana Ave. Protesters braved the heat and marched in full unison chanting “free our children now,” as they made their way to fight for families who have lost their children as soon as they crossed the border. The Border Network for Human Rights orchestrated this event just two days after U.S. Rep. Beto O’ Rourke led his own March at Tornillo, Texas.

“Our aim is to not only pass legislation in a month from now, our aim is to stop incarceration of children now, today,” Garcia said. “I don’t know how can they justify having children in tent cities in the middle of the desert away from their parents.”

The Trump administration has claimed that only Congress can end the family separation policy. This policy is due to Trump’s “zero tolerance” policy that was enforced on immigrants. But numerous lawmakers, including members from the Republican Party, have stated that the president can halt the separation of families immediately if he chooses.

Jean Almanzan, a retired educator in Texas and New Mexico, marched today because of what he feels is a racist agenda put forth by the Trump administration.

“The Republican Party, especially the ones (up for re-election) in November, are starting to realize that this is not going to help them. This is something horrible for the party,” Almanzan said. “So now they’re beginning to speak up. But it’s not fast enough. Saying one thing and doing another are two different things.”

Elise Stuart, 65, a poet and piano teacher, drove down with a group of friends from Silver City, New Mexico, to join the protest against the detention centers. Stuart was looking for ways to help online when she stumbled upon the march. Immediately Stuart and her friends made plans for the three-hour drive to El Paso.

“It’s just so inhumane and cruel to these children and these mothers, to separate them like this,” Stuart said. “It’s an all-time low for this country to even engage in this type of practice. “

There were no counter protesters present.

As of now, President Trump will meet on Capitol Hill Tuesday night to discuss legislation with GOP lawmakers. There are two purposed bills on the House floor. The White House claims President Trump will sign either bill on Friday. Between the two different bills, one allows a compromise between the parties that allows DACA recipients access to a green card and legalization, while the other bill favors Trump’s border wall.