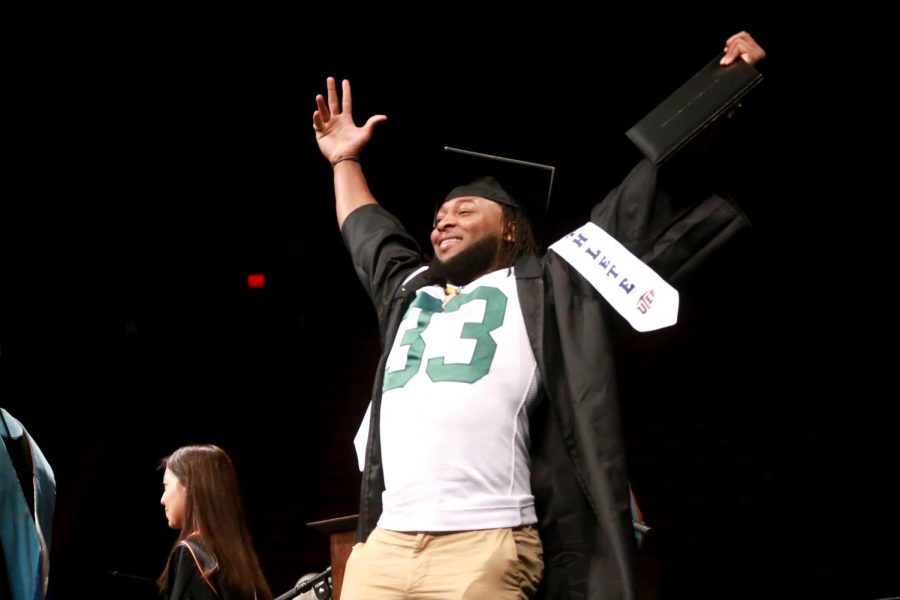 Green Bay Packers running back, Aaron Jones during his graduation Ceremony at UTEP's Don Haskins Center on Saturday May 12.

UTEP’s all-time rushing leader and Green Bay Packer running back Aaron Jones was among the graduates, returning to UTEP for his bachelor’s degree in multidisciplinary studies.

Below is a list of the graduates, courtesy of UTEP athletics:

Was a part of the women’s track & field team that won three consecutive C-USA indoor titles, and also a member of the Miners’ first conference outdoor championship team
Finished her career with two conference titles in the 400m hurdles
Ranks No. 2 in school history in the 400m hurdles with a career-best 58.27 seconds
C-USA Commissioner’s Honor Roll (2016)

Will be a senior on the 2018 squad
Played in 28 games, making eight starts at right tackle
Was used in multiple run-blocking schemes as a sophomore
His efforts helped Aaron Jones gain a program-record 1,773 rushing yards in 2016

Played in 29 tournaments for the Miners over three seasons
Ranked second on the team in scoring average as a sophomore and junior
Picked up a pair of top-10 finishes
C-USA Commissioner’s Honor Roll (2015, 2016, 2017)
C-USA Academic Medal (2015)

Defensive lineman played in 14 games for the Miners
Was a three-year letterwinner
Notched a total of 15 tackles
Participated in six contests as a true freshman, seeing action on special teams and defense
C-USA Commissioner’s Honor Roll (2015, 2016, 2017, 2018)

Ranks second in school history in three-point field goals (174), fifth in minutes (3,767), eighth in three-point percentage (.388), ninth in scoring (1,407 points) and 10th in steals (126)
Scored in double figures 74 times with fourteen 20-point games
Started 100 games for the Miners … third team All-Conference USA as a junior
Team MVP as a senior

Will be a senior on the 2018 squad
Has played in 24 games for UTEP
Has seen the field as a receiver, kick returner and punt returner
During his career has returned 35 punts for 254 yards with 30 kickoff returns for 697 yards
Returned six punts for 104 yards versus NM State in 2016

Wide receiver played for the Miners for two seasons
Saw action in three games and made one start
C-USA Commissioner’s Honor Roll (2016, 2017)

Was a part of the women’s track & field team that won three consecutive C-USA indoor titles, and also a member of the Miners’ first conference outdoor championship team
Named the 2015 Conference USA Outdoor Freshman of the Meet
Holds the fourth-fastest time in program history in the 800m with a career-best 2:04.68
Has eligibility through the 2019 season
C-USA Commissioner’s Honor Roll (2016)

Registered 161 tackles in two seasons, second most by a Miner during that span, after transferring from Kilgore College
Started all 24 games at the linebacker position
Added five pass breakups, two forced fumbles, one fumble recovery and 1.5 sacks

Played in 28 tournaments for the Miners
Registered two top-10 finishes during his senior year, including tying for fourth place at the Herb Wimberly Intercollegiate
His collegiate best was a third-place showing at the Price’s “Give ‘Em Five” Invitational in 2016
C-USA Commissioner’s Honor Roll (2014, 2015)

Will be a senior on the 2018 team
Has played in 26 games and made 17 starts at quarterback
Has 23 career touchdown passes, needing only one to crack the program’s top-10 list
Led the Miners to a five-overtime victory at UTSA in 2016 and came on in relief at NM State, leading UTEP to a come-from-behind OT victory over the Aggies as a freshman
C-USA Commissioner’s Honor Roll (2015, 2016, 2017, 2018)

Played in 38 games for UTEP, seeing action on defense and special teams
Notched 56 stops, 5.5 tackles for loss, 2.5 sacks, one pass breakup, one fumble recovery, one forced fumble and one blocked kick
Posted a season-best 24 tackles as a junior

Member of the UTEP football roster during the 2017 season, working with the scout team

Competed in 42 tournaments for the Miners
Part of the 2017 Conference USA Championship lineup
Topped the Miners’ scorecard at the 2018 conference championship, tying for sixth place
C-USA Commissioner’s Honor Roll (2015, 2016, 2017, 2018)

Will be a senior on the 2018 team
Has played in 35 games for UTEP, making seven starts at wide receiver
Has registered 49 catches for 414 yards and five touchdowns
Last season, registered a career-long 44-yard scoring reception against Rice
Hauled in a game-winning six-yard touchdown reception during five-overtime victory at UTSA in 2016

Played in 198 games and made 181 starts during her four-year career
Became the eighth Miner to join the 100-RBI club and finished her career with a .335 batting average, ranking sixth on the program’s all-time list
Also connected on 18 career long balls, tied for eighth in the record book
C-USA Commissioner’s Honor Roll (2015, 2016, 2017, 2018)

Four-year competitor in both disciplines for the UTEP rifle team
Paced the Miners in aggregate average in each of her final three seasons
Boasts two of the top-five aggregate totals in school history, in addition to four of the top-10 smallbore records
C-USA Commissioner’s Honor Roll (2017)

Three-year starter in the post who ranks second in school history for double-doubles, fourth in field-goal percentage, fifth in rebounds, sixth in blocked shots and tied for ninth in rebounding average
Second team All-Conference USA as a senior when she averaged 14.9 points and 9.6 boards
Helped the Miners win the 2016 C-USA regular-season championship and advance to the quarterfinals of the WNIT
C-USA Commissioner’s Honor Roll (2016, 2017, 2018)

Defensive lineman is entering his final season in the Orange and Blue
Has played in 22 games and made nine starts
Has recorded 62 tackles, three pass breakups, two quarterback hurries and four tackles for loss

Was a part of the women’s track & field team that won three consecutive C-USA indoor titles, and also a member of the Miners’ first conference outdoor championship team
Clocked a personal-best 4:47.23 in the 1,500m at the 2015 C-USA Outdoor Championships, scoring four points for the Miners