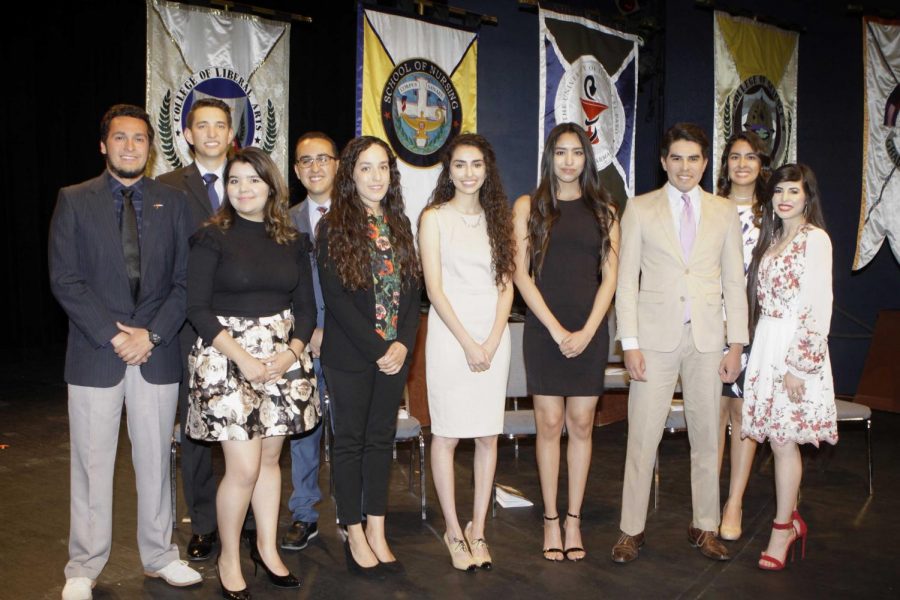 Each spring semester, UTEP takes the time to celebrate one of the school’s honored traditions by celebrating the accomplishments of its top 10 seniors.

“They represent the very best of UTEP talent, high aspirations and hard work, and we very proudly celebrate their outstanding achievements as UTEP students, and their promise of even greater future success as UTEP graduates,” said President Diana Natalicio in an email.

These year’s top 10 students said that being part of this list requires more than getting the highest grade on an exam or being the first one to finish a research paper.

Throughout her years as a Miner, Diaz was the vice president and president of the University’s Scholar Society and a member of A-Prime Time, an organization designed to support the student’s involvement with outside and on-campus events. Diaz also completed a research internship with Rice University.

Diaz is in the process of choosing what her future will look like. She has received letters of acceptance from the El Paso Paul L. Foster School of Medicine, Baylor College of Medicine and UT Health Science Center of Houston’s McGovern Medical School. As a member of A-Prime Time, she completed a service learning program by visiting the state of Queretaro in Mexico. During her time in Queretaro, Diaz was shocked because patients were not receiving the proper medical treatment they deserved.

“I made a promise to myself as a doctor that I would help the people that need it the most, and the people who are suffering the most,” Diaz said. “One of my biggest plans after I become a doctor is to one day return to El Paso and help our community.”

Tapia said that being a top 10 senior is not about getting the highest grades, but about being an active student who shows a real interest in their career.

“I legit cried when I opened the letter,” Tapia said. “My hard work was being honored and recognized and it just felt awesome.”

Tapia was a member of Alpha Pi Mu, the industrial engineering honors society at UTEP, and the engineering collegiate senator for UTEP’s Student Government Association. She was also a member of Latinos in Engineering and Science, one the 8,000 national representatives for the Society of Hispanic Professional Engineers and interned with Lockheed Martin, General Electric and Boeing, the world’s largest aerospace company.

Tapia’s future is in Houston, where she will start working with Accenture as a consultant analyst.

“One of my long-term goals is to have my own consulting company–in specific to data analytics,” Tapia said. “I also want to be part of a women’s program because I feel that Latinas in STEM and women empowerment are things that we really need to work on.”

Ontiveros has served as the president and the vice president of internal affairs for the Medical Professions Organization, where he helped UTEP and high school premedical students in their journeys toward becoming healthcare professionals.

He was a member of the UTEP Phage (bacterial virus) Hunters program, where he was able to become the co-author of four genomic annotation publications.

During his time at UTEP, Ontiveros was able to intern with the Scripps Research Institute in California to study the Zika virus and evolution genetics during the 2016 outbreak of Zika virus in the Americas. Ontiveros received letters of acceptance for three medical schools including two MD/ Ph.D. programs and one MD program. He has decided to attend the MD/ Ph.D. program at the UT Health Science Center at San Antonio’s Long School of Medicine.

“I would really love the chance to come back to UTEP and give back to the community that brought me in and took care of me and was able to prepare me to be successful,” Ontiveros said.

She is currently an engineering intern at the Texas Gas Service Company, where she works on new gas designs and structures for buildings among other things. Hussein, who is graduating with honors, will move to Houston to start working at her dream job.

“ExxonMobil has always been my dream job,” Hussein said. “I’ve always wanted to intern and work with them, and it feels great to know that right after graduation I’ll be one of their employees.”

Herrera served as a research assistant at the Intelligence and National Security Department at UTEP for two years and was part of the Supreme Court for UTEP’s Student Government Association. He was an intern with Congressman Beto O’Rourke in 2015 and an intern for the Department of Defense in Washington D.C.

“I worked with wounded veterans to get them prosthetic limbs, wheelchairs, PTSD counseling and cancer treatment,” Herrera said.

Herrera has now accepted a job at the U.S. Department of State to work in the Foreign Service.

“I’m going to have a career overseas after graduation and I just hope to learn to speak more languages,” Herrera said.

He said that graduating on the top 10 list was a way to honor those who supported him in his college experience.

“I wanted to do it for my parents it was more for them than for me,” he said. “I just wanted to give them something to show off my appreciation that I feel for them.”

As the president of the Art History Association, Martinez took the initiative to show her artistic skills to the community of El Paso. In 2017, she painted a mural at the Mexican Consulate of El Paso that represents the unification of the United States and Mexico. She was one of eight students who interned with the Metropolitan Museum of Art at New York City in 2016. Martinez also served as the Fox Fine Arts’ representative for the Student Government Association.

“I’m planning to move to New York City in July, even though I don’t have a concrete job offer yet,” Martinez said. “And after that year I want to get into a fine arts department.”

Martinez said she does see herself as a professor at some point in her life, but that succeeding as an artist is her main goal.

Muñoz, who is a member of the Medical Professions Organization at UTEP, has served as a member and as president of Miners Against Hunger. She’s also been a success networking team facilitator for the National Society of Leadership and Success, a secretary for Students Pushing At-Risk Kids toward Success and a member of the honors society of Phi Kappa Phi, as well as being a member of the University’s Scholars Society.

Muñoz, who will also graduate with honors, will continue to further her education by attending the biomedical engineering doctoral program at UTEP. Her goal is to become a biomedical engineer and create devices that will help those in need of support.

“El Paso has done so much for me,” Muñoz said. “So I would love to create a program, maybe a non-profit organization. I would like to provide anything that I create, like life-saving devices for people who can’t afford them.”

When Morales opened the letter that said he was among the top 10 seniors, he cried for 30 minutes. He said that it was an honor to know that his love for the university and his hard work were recognized by UTEP.

During his time at UTEP, he served as the traffic court chief justice for the Student Government Association, public relations officer for Sigma Tau Delta, which is an English Honor Society, and a member of the Student Black Union, among other organizations.

He was also the founding president for the Society of Collegiate Leadership and Achievement, an honors society that seeks to increase community service within the campus and that strives to strengthen the leadership and networking capabilities of everyone at UTEP.

Morales interned with the National Education Association, but said that working at UTEP is what he is striving for.

“This is my place, I don’t see myself working for any other company, university, and not to sound too cliché, but even for another family,” he said.

As an active member of the Art History Association, Hurtado has gone out to the community of El Paso to give talks and presentations about the artwork in El Paso. He interned with the Texas Historical Commission in Austin, where he worked with the Community Heritage Development Division and the Division of Architecture, which is focused on art preservation.

After his internship, Hurtado joined the Architectural Preservation Committee with the Texas Trost Society, where he has given tours about the history of El Paso. He has also created several documentaries on historic preservation, specifically about the destruction of several architectural structures in the downtown area of El Paso. Hurtado will be taking a gap year to take different language courses that will help him have a better knowledge and appreciation of art and history behind it. After that, he hopes to continue to further his education by enrolling in graduate school.

He said that students need to have a better knowledge of the arts and architecture of El Paso and that he would like the opportunity to come back as a professor.

“I really think UTEP needs more cultural programs, it needs students with a knowledge of cultural backgrounds,” Hurtado said. “Art history is needed here. El Paso is a very cultural city and it’s, unfortunately, being undervalued and it would be great to come back and teach.”

Arreola’s journey to graduation will be slightly different from the majority of the graduating seniors at UTEP. Arreola, who is an Archer Fellow and an intern with the Kennedy Center, a performing arts center in Washington D.C., will fly back to El Paso just in time for her graduation.

Arreola will then fly back to D.C. to finish her internship where she has been working in Turnaround Arts—a program that uses the arts as an educational tool to encourage students to engage inside and outside the classroom.

While at UTEP, Arreola served as a teaching assistant for the Department of Theatre and Dance, as well as being an intern for Congressman Beto O’Rourke and for O’Rourke’s Senate campaign.

She said that high school students should try to give UTEP an opportunity and break the mentality of “UTEP is my last option.”

“I don’t know why, but some of us in high school have this mentality that UTEP should be our last college option,” Arreola said. “Once I became involved with student organizations and learned about the traditions and history of UTEP I appreciated the university for what it has to offer to students.”

Arreola, who will also be graduating with honors, said that one of her goals is to be a producer for theatrical and film productions and says she will be applying to different theater companies around the country.