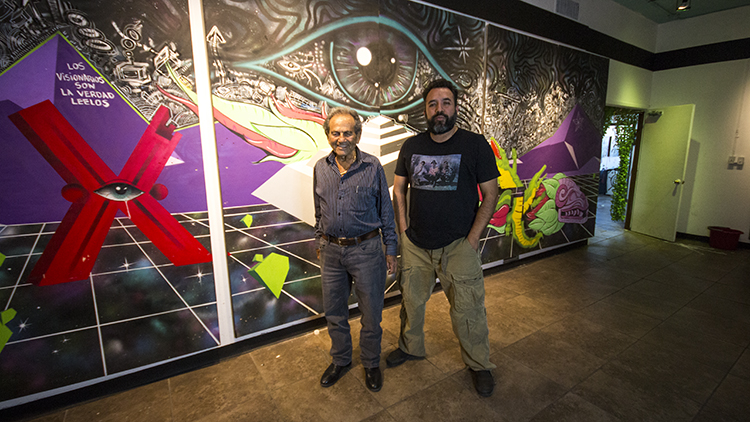 Left) Don Shapiro and Valentin Sandoval stand in front of a Los Visionaries mural at Power at the Pass. The two have partnered to start Power at the Pass, a center for artists to cultivate ideas and work on multimedia projects.

A book, a documentary and a newly revamped building on Texas Avenue in central El Paso are all the works of an entrepreneur, Don Shapiro, and filmmaker/author, Valentin Sandoval. Around a year ago, the two came together to start Power at the Pass at 1931 Myrtle Ave.

In 1950, Shapiro graduated from New York University with an accounting degree. A Bronx native, Shapiro went to school on the GI Bill after serving in the Navy during World War II.

“After that I wanted to travel, and as luck would have it, a friend of mine and myself were offered an automobile to deliver from New York to Fort Worth,” Shapiro said. “That was my first taste of Texas. I was there a month and had a job unloading freight cars and earned enough money to buy a car with my friend. We headed west and wound up here.”

Shapiro started Acton West, a store that specializes in jeans in 1970. This was around the same time that the North American Free Trade Agreement started to create jobs across the border. The company started as a $9,000 investment in a small 4,000-square-foot building with 25 employees which grew into four plants that employed 1,700, while supporting an additional 1,000 through contracted plants.

Shapiro became a multimillionaire and sold the company in 2004 when the government put an embargo on all imports and they could no longer cross any goods.

Now 90 years old, he has been in El Paso for 63 years and invests his money in real estate. He owns seven of the buildings on Texas Avenue between Piedras and Cotton streets.

One of those buildings was built in 1945 by General Motors to construct Jeeps for World War II. In the ‘70s it became part of Action West, which Shapiro has owned since.

Now, the building has been transformed into a creation center for visual artists, filmmakers, podcasters and creators of any and all mediums.

Shapiro and Sandoval want Power at the Pass to become a space where UTEP students and other young creators in El Paso can come in and create content for businesses like Adobe and for publications like the Huffington Post, Vice and Buzzfeed.

“You leverage the geopolitical position of Juárez and El Paso, with NAFTA and with this administration. The new maquiladores will be coders, they will be millennials shooting minute-and-a-half webisodes,” Sandoval said.

About a year ago, Shapiro met Sandoval and together they formed a partnership. Shapiro had been working on a book about his life and journey and needed someone to help him write it.

Sandoval’s first book “South Sun Rises” was released in 2014 and tells the story of his upbringing. The book was about his mother, who raised four kids as a single parent and became a citizen. The book received the Southwest Book Award from the Border Regional Library Association.

Shapiro and Sandoval were able to connect through their upbringing. Having strong mothers was a common theme in their discussions. With that, the two saw their connection as a chance to finish Shapiro’s book.

“It’s crazy that my first two books are so intent on motherhood. The difference is that one single mother on her own from Juárez, and Don’s was from the Bronx, were great healthy ideal parental figures and that’s why Don and George, his younger brother, are so successful,” Sandoval said.

Don’s brother George Shapiro is an award-winning producer in Hollywood. He is best known for producing “Seinfeld.”

Sandoval was interested in Shapiro’s story so the two decided to continue the book and rename it “Power at the Pass.”

“(El Paso) is no longer Paso Del Norte, which was the passage, it’s not a passageway, it’s a power and energy city. It’s only the beginning,” Shapiro explained.

The two also decided to start a film production company, Coronado Film Productions, to produce a documentary that is also based on the book and explores what they describe as the other major players in El Paso. The project showcases the story of Cecilia Levine, Emma Schwartz, UTEP President Diana Natalico, Jim Scherr, Jaime Bermúdez, Lyubov and Aleksander Titovets and other El Pasoans who they say have put El Paso on the map.

Before writing books, Sandoval started a degree in print and electronic media in 1997 at UTEP, but never finished his degree. However, he won four film awards while in school and went on to work on movies in Albuquerque, New Mexico and different parts of the Southwest as well as editing for Magnolia Pictures.

Sandoval is looking to find interns that will help him edit and work on all of the footage for the “Power at the Pass” documentary. He also wants to have interns and other young artists come in and work on projects.

Richie Marrufo, a project coordinator and audio engineer at Power at the Pass, fulfills a variety of roles at the building. For 10 years Marrufo has hosted the Barbed Wire Open Mic Series, El Paso’s longest running open mic.

To celebrate the 10th anniversary, Marrufo started a podcast, BWOMS, where he interviews writers, poets, musicians, singer-songwriters, educators and entrepreneurs.

“It highlights some of the unique culture influencers in the city as well as people who pass through,” Marrufo said.

Aside from his podcast, Marrufo has also been instrumental in the main projects taking place at Power at the Pass.

“I was initially brought along to help with the writing of the book and edit. Through that, there was just so much more opportunity waiting for us,” Marrufo said. “I help a lot with the audio production side of things, whether it be recording sound for projects or editing them.”

Now a part of the El Paso music scene for many years, Marrufo said it seems to him that more people are getting on board to create a cultural change from the ground up.

“I see people looking at possibilities that they can do the same thing,” Marrufo said. “We are now providing a support system for people to do what they want to do. It’s growing for the better and people want to be a part of it.”

However, one of the challenges Marrufo does recognize is getting people to come out to events.

“There’s so many (events) that have popped up around town, but it is hard for a lot of people, whether it’s not economically viable for families come in to the picture,” Marrufo said.

He said the solution to this problem is creating a culture that serves as what he calls a “spider web of creation,” in which the city comes together through different music settings, programs, shows and other recording studios.

“What we want to do is bridge the gap between the starving artist and making sure people are compensated for their work by creating the network for that to happen,” Marrufo said.

The book, “Power at the Pass,” is expected to come out around March of 2019. No date is set for the release of the documentary yet.