Constructing mirages in the desert through photography 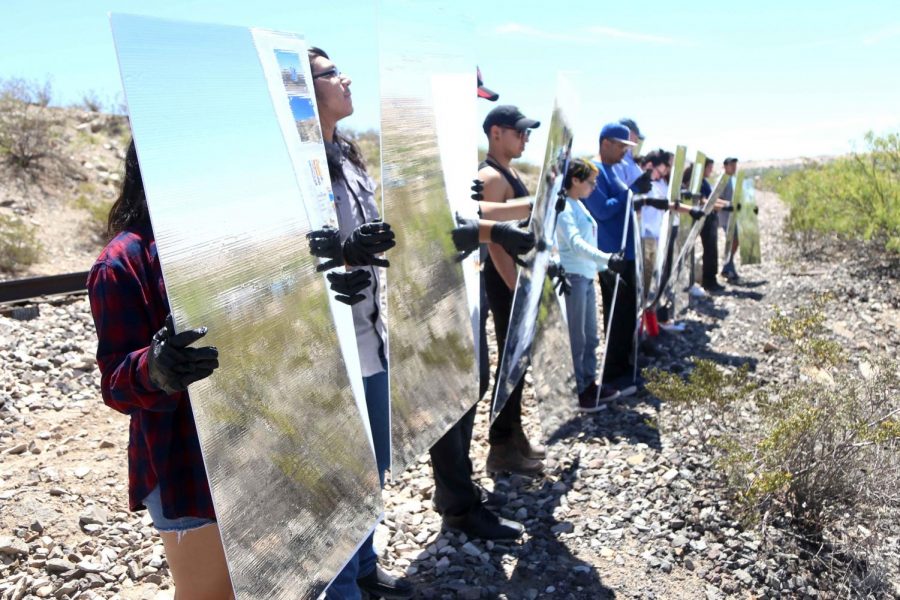 (Left) Volunteers from the El Paso and Las Cruces region hold Mylar mirror panels at Ardovino’s Desert Crossing on Saturday, April 31. (Right) Artist Steven Randall instructs the volunteers on where to stand to create the mirage.

Next to an active train track, and a few hundred feet from the U.S./Mexico border in Sunland Park, New Mexico, over 100 volunteers of all ages came together in the desert.

“The idea with this was basically how to make a mirage,” said Steven Randall, a interdisciplinary artist and lecturer at UTEP’s art department, where he teaches 3-D design. “There is something really strange and beautiful about having a group of strangers come together for a really intimate shared moment for 15 to 20 minutes.”

To create the man-made mirage, Randall had 75 volunteers on a hill holding up large Mylar mirrors so only their feet showed.

“Our intent is to explore the seemingly immaterial with the hope to uncover hidden patterns and give our shape findings,” Randall wrote in the artist statement.

For many, the collaborative effort was not about the end result, but the idea of art bringing people together.

“What interests me is a large array of people, who are different ages, cultures, just like this single thing bringing them all together and just having them unite for a single piece of art,” said Andrew Briseno, a sophomore majoring in graphic design.

Randall said that he did not want to limit the work to institutions, but wanted to create an event where anyone could come and participate.

“It’s also something I think anybody can relate to. It’s not really a deep idea, you know imitating this mirage. It’s kind of a simple thing that accessible to everybody,” Randall said.

Randall got the idea during his daily commute from NMSU and UTEP. Coming from New York, he said that when driving across the desert landscape he immediately noticed all the mirages.

“So I started thinking about my relationship to my car totally different and my windshield became my relationship to reality,” Randall said. “It was like the screen in which things were passing by me. I started thinking like mirages, like glitches, like a dropped pixel within my screen, so this is part of a larger body of work dealing with mirages.”

He currently has an exhibit at the Rubin Center and is working with the Nanotech Institute in UT Dallas to explore the idea of a collaborative man-made mirage.

Robert Ardovino, co-owner of Ardovino’s Desert Crossing and a photographer, gave Randall permission to use the restaurant’s property as a venue.

“I really think it was a lot less about the photography and a lot more about the people holding those signs and the fact that they were willing to come out and hold Mylar without a face and just be a part of the art piece,” Ardovino said. “I think that’s so awesome.”

Randall brought 75 panels, but quickly ran out as the crowd was much larger than expected, so the remaining volunteers stood behind the Mylar panels.

“I liked the amount of people who showed up, I thought there were going to be just a few for this  community, but seeing all these people gathering around, and the fact that we ran out of panels and we had to improvise ways we could use the people in the photos,” said Briseno.

Briseno said he wants to see more collaborative works like this one. Ardovino thinks that El Paso is starting to see a growth of skilled artists.

For more information and to check out the completed work and Randall’s other works, visit svrandall.com.