March for Planet Earth is taking over downtown 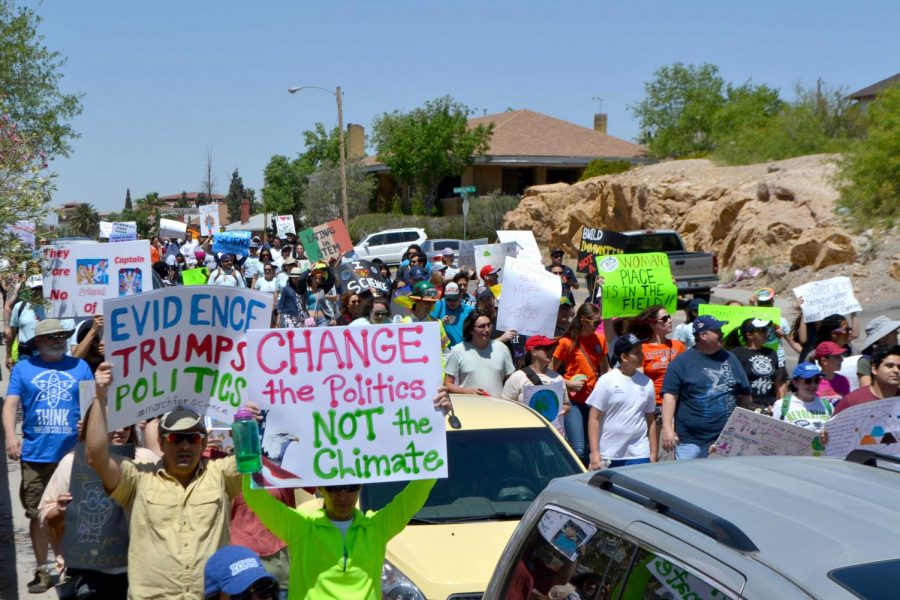 Activists marched from Mundy Park to San Jacinto Plaza on Earth Day, April 22, 2017, for the National March for Science.

This Earth Day, the Frontera Water Protection Alliance is hosting March for Planet Earth, which will begin at Centennial Plaza and end at San Jacinto Plaza on Sunday, April 22, at 8 a.m.

The march, which has been six months in the making, is meant to educate the community on environmental issues, such as climate change and the harsh extraction of fossil fuels known as fracking.

“We’re trying to get people in the community engaged on the issues that hurt our environment, and show them how, as a group, we’re able to make real change,” said Crystal Moran, founder of the Frontera Water Protection Alliance and NMSU graduate with a degree in public health.

The group wants to continue to spread awareness and education on the adverse effects of fossil fuel extraction such as fracking and oil and gas drilling.

The organization, which is inspired by other water protection movements throughout the country, most notable being the group in Standing Rock, has been fighting to prevent future pipelines, fracking, oil and other fossil fuel projects in the El Paso region.

“As far as the energy we use, we want to create a sustainable future for our children and grandchildren, and the path that we are making right now is not the right one,” Moran said.

Moran and other activists say the recent Comanche Trail Pipeline, which runs west from Pecos and to the border, is an example of the damage done to our environment.

“It’s going to affect us some way or another,” Moran said. “Maybe it’s not at this very moment, but it will in the future. I don’t think it’s a question of if it will rupture, but when it will.”

Those who attend the event will also be able to sign their name on a letter to state representatives that demands the movement to a healthy clean environment free of fossil fuel contamination.

“We want to educate people so that they feel empowered and know what to do and how to directly affect policy,” Moran said.

The event will encompass plenty of activities after the march, including food trucks, vendors and live music by artists Supaman, who mixes hip-hop music with traditional Native American music, Lyla June, Artson, Tara Trudell and more.

Artson, a Native American and El Pasoan musician, won the Nammy Award for Best Narrative Music Video for his song “Never Give Up” during the 17th-annual Native American Music Awards and has a new album dropping on April 20. Lyla June, also a Native American, is a motivational speaker, poet, musician and activist of Navajo and Cheyenne lineages.

Organizers for March for Planet Earth hope to shine a light on the issue during the march to prevent more pipelines from coming into the community. Moran, who used to intern for U.S. Rep. Harry Teague, D-New Mexico, says one of the most important things you can do, besides joining the march, is to call your representatives.

“They are paying attention, they are listening and noticing, whether you think so or not. What they hear from us is what sets their agenda,” Moran said.

One of the main issues that the Frontera Water Protection Alliance wants to focus on is fracking. Moran says El Paso is currently being threatened by fracking. The main water source for El Paso, the Hueco-Mesa Bolson aquifers, sit right outside the county and is the site where Torchlight Energy plans to drill for oil.

“Just because we don’t see it right away doesn’t mean our water is safe, we really want to get that message out. There’s a lot of footwork that could be done that could actually make a difference,” Moran said.