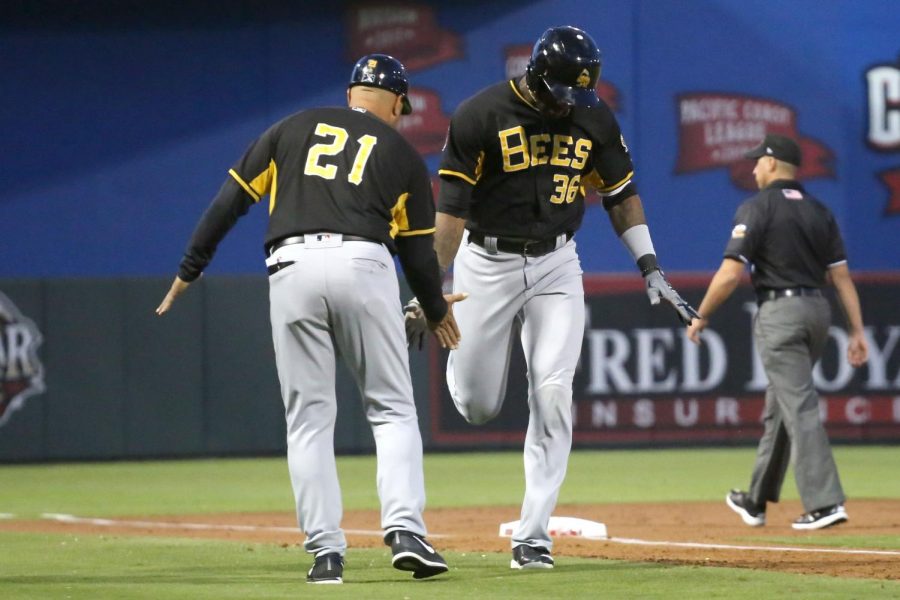 Right fielder Jabari Blash high fives manager Keith Johnson on his way to home base after hitting a home-run on the Chihuahuas opening night on Tuesday April 10 at Southwest University Park.

After shutting out Las Vegas 14-0 on Monday, the Chihuahuas dropped their home opener in a huge fashion, losing 14-1 against the Salt Lake Bees on Tuesday night.

In front of 9,231 packed fans, the Chihuahuas fell to 4-2 overall on the season with the loss in Southwest University Park.

Former El Paso center fielder Jabari Blash hit a two-run home run to spark the Bees’ lead in the second inning. Salt Lake went on to knock five homers out of the park on Tuesday.

As the Chihuahuas inched back to the Bees lead, trailing 4-1 by the seventh, Salt Lake had two huge innings, scoring six runs in the seventh and four in the eighth.

Debuting in front of El Paso, second baseman  Javy Guerra went 2-for-4 with an RBI.

To finish out the game, infielder Diego Goris pitched a scoreless solo inning, which was his first time on the mound since 2013. Eric Lauer of the Chihuahuas was credited with the loss on the day.

Next, the Chihuhuas will take on Salt Lake on Wednesday at 11:05 a.m. at Southwest University Park.