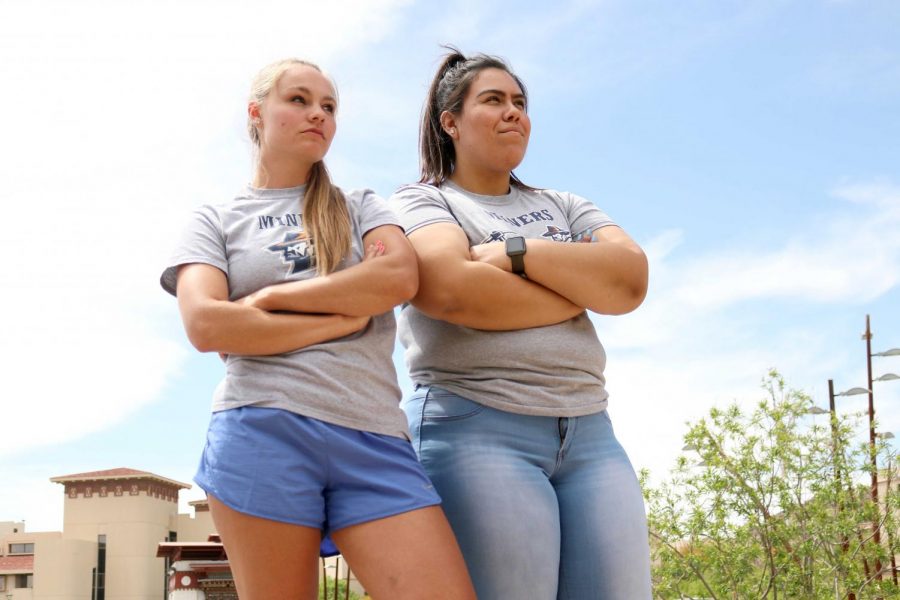 Emilie LaRocque (left) and Ariana Galarza (right) will graduate in the fall with their bachelor’s degree in kinesiology.

For trainers across the nation, the main responsibility is to care for injured athletes in a quick manner, while also helping them maintain and build a healthy lifestyle.

Emilie LaRocque and Ariana Galarza, both senior athletic trainers at UTEP studying kinesiology, know the importance of their role in the athletic department. LaRocque has been a trainer now for two years, while Galarza has been one for three.

“Athletes don’t necessarily know how serious their injuries can be,” LaRocque said. “That’s why we’re there, to help them understand and then help them grow and heal so they can perform their best.”

Student trainers at UTEP are taught how to respond and handle an injury with classes in the kinesiology department and are required to go through the basic classes before completing an application for the job.

Once getting the job, student trainers are limited to handling injuries, considering its severity, but are overseen by a certified athletic trainer while in training.

“I’ve learned so much since starting my job as a trainer,” Galarza said. “When we’re in there (classes), they teach us about the body, what we should and what we shouldn’t do when an injury happens on the field.”

As a former track runner in high school, LaRocque’s dreams of becoming a trainer came from the unfortunate end of her time as an athlete. Continuing her life on the track took a turn for the worst when she developed a blood flow condition in her knee that caused the bone to chip.

LaRocque decided that her health was more important, and she transitioned to what she wants to help athletes with today.

While Galarza was never involved with sports prior to becoming a student trainer, the job has forced her to become more organized with both her eating and sleeping schedules.

“During football season, I didn’t have a set lunch hour and sometimes my sleeping schedule was off because we would get back after midnight,” she said. “That’s been the hardest part—having to wake up so early during the football season and being here 24/7 during the season, but it has made me more organized.”

The work schedule has also impacted LaRocque, causing her to make some changes in order to adapt to the early mornings.

“The hardest part for me is having to get used to waking up at 4 in the morning to be at school by 5 to prepare for football practices,” she said.

Although the schedule may be tough, the job is even more challenging for trainers due to the wide range of skills and responsibilities they must possess.

“Athletic trainers are extremely important because we design rehabilitation programs and go through various certifications such as CPR, which saves lives in the blink of an eye,” Galarza said. “During games, athletic trainers are the first ones to go out on the field after an injury and assess whether the athlete has to come off the field or can stay in the game.”

According to the National Athletic Trainers Association (NATA), athletic trainers are the only health care professionals whose expertise in prevention ranges from minor sprains to catastrophic head and neck injuries, and from minor illnesses to exertional heat syndrome.

“This profession is important in sports because athletic trainers take care of athletes from all injuries, both minor and major,” LaRocque said. “Without athletic trainers, athletes could be severely injured and can even die if they are unaware of the severity of some injuries the first time, like concussions.”

LaRocque and Galarza are dedicated to becoming trainers at a college or university for the rest of their careers after they graduate. They plan to go to a master’s program in Texas to become the certified professional they’ve had to shadow as a student.

In order to become certified, athletic trainers must take and pass the Board of Certification (BOC) examination. A test in which 49 states and the District of Columbia recognize as the appropriate state regulatory agency and only avenue to legal athletic training practice.

“The way my high school athletic trainers talked about their professions really made me want to get my master’s and become certified,” Galarza said.

The average salary for athletic trainers in the United States sits at around $40K annually, according to an April 1 update by Payscale. Despite what the income may be, LaRocque and Galarza say that things that come along with the job make up for it.

“Athletic trainers don’t make a lot of money; however, they have some nice benefits such as working while having fun watching the games,” Galarza said. “My favorite part about being a trainer at UTEP has been getting to travel with the team for all their away games.”

LaRocque has enjoyed the other benefits of being a student trainer at UTEP while also traveling with the teams.

“Traveling with the team is fun, but we also get the things that athletes get like the food and all the gear,” she said.

At the end of the day, trainers find a sense of accomplishment in what they do, especially when they see an injured athlete fully recover and perform at a higher level.

“What I love most about the job is seeing the athlete grow stronger as a person,” LaRocque said. “From when they come in hurting to when they get back on the playing field making star plays, that’s what matters.”