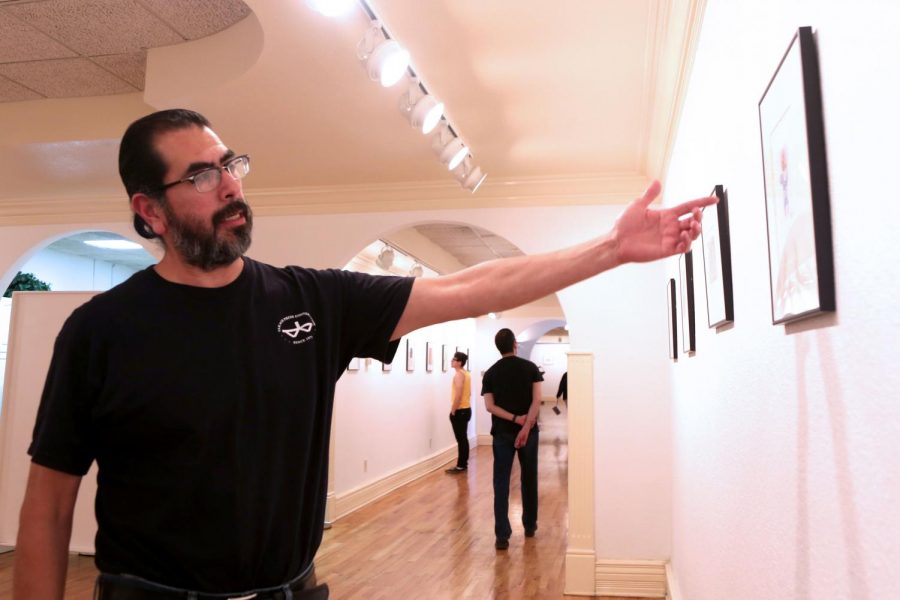 Guerra explains the process in which the print was made from the second Horned Toad Print Exhibit on Thursday. March 22 at la Galeria de la Mision De Senacu.

Coming from a family of printmakers, Manuel Guerra, a UTEP lecturer of foundation classes, including design, drawing and printmaking, never imagined getting into commercial printing.

His grandfather owned a commercial printing shop on Alameda Avenue, which his mother later took over.

It wasn’t until Guerra met his mentor Kim Bauer, associate professor of printmaking, who got him into printmaking.

“He started showing me how to do images. He saw my natural ability to draw and my fascination in drawing,” Guerra said. “He introduced me into lithography, and from that point on, it was love at first sight.”

Guerra graduated from UTEP with a bachelor of fine arts in 1994 and received his master of fine arts in drawing and printmaking from the State University of New York in 1997. After graduating, he came back to El Paso and started teaching at UTEP.

In 2005, Guerra opened his own print shop, Horned Toad Prints, in the El Paso Art Junction building. They recently moved to a private location on the West side.

He started collecting materials that he still uses while he was in graduate school.

“I would buy a brayer here, I would buy a tube of ink there, and I always had my sight set on my own press,” he said.

He now has various artists who print at his shop, and conducts workshops and gives private lessons to whomever is interested in learning how to make prints.

He has always been interested in his students’ work.

“I really like to work with the students. I like to see their amazement with printmaking–expecting the unexpected, the process and seeing the students and their energy move throughout the studio. That’s what really fascinates me here about UTEP,” Guerra said.

Once he had the opportunity to help out his students get out into the real world, he took it.

He, along with other colleges started the international Horned Toad Print Exchange in 2014, which involved 28 artists. This second print exchange had over 53 participants.

“Through the influence of Mr. Bauer, we used to have print exchanges through classes and we would get all the students involved,” Guerra said.

The exchange starts with an online call to all printmaking artists worldwide.

Artists are asked for a fee of $25-$30 and then to submit an edition of 10 prints that are exactly the same. The artists were allowed to use any of the hand-pulled printing techniques: intaglio, lithography, relief and serigraphy. Each artist then receives eight prints from different artists. Two of the prints are kept for the Horned Toad Print exhibition.

“We do not discriminate on status, it could be anybody from an amateur artist to a very professional artist, we have had both,” Guerra said.

Gonzalez hopes to travel when she graduates, but plans on staying in El Paso and wants to open her own studio, not only for herself, but for other artists as well.

“I don’t want to do this by myself, I want to take people with me that are gonna help me out and they can find other people. They can get out there because that’s what it all is. We’re a family. We have to stick together,” she said.

Gonzalez likes to make her pieces personal, but also relatable to others so that she can make them feel like they aren’t alone in what they are going through. She pays close attention to how the piece was made, the colors, the image and even thinks about the medium she used, linocut.

Each deep sharp cut represents the anxiety and stress that she felt.

On the other hand, Sanchez is currently working on his master of fine arts in printmaking at Edinboro University in Pennsylvania.

“The piece I included in the exchange was the beginning of a body of work I’m currently working on,” Sanchez said. “It is loosely about the immigrant experience and how blurred the concept is for people who have never been a part of it—legally or illegally for that matter.”

Sanchez plans to work as print professor at the collegiate level, but he says he would love to come back to El Paso.

“I feel I belong to the desert. I’d be fortunate to end up somewhere along the Southwest,” he said.

Both Sanchez and Gonzalez have been inspired by Guerra and plan on starting their own print exchanges soon to help printmaking come back and get more recognition.

Networking is something Guerra holds to a high standard for print exchanges. It helps artists to see other work and get inspired to create other pieces or to get invited into shows around the world, according to him.

Guerra said El Paso has a lot of talent in the arts, but there aren’t many areas for the art to be shown.

“Because of economic situations or other things, El Paso is not really known as an art world. I shouldn’t say that, but the talent here is so beautiful, it’s so strong,” Guerra said. “I have lived in New York, I have visited many different places. El Paso is unique. El Paso is very strong in the arts.”

Guerra insists that printmaking isn’t dying, but evolving with new machines and techniques.

“You don’t have to remain with just etching or just litho, you can always cross over and start to layer over,” Guerra said. “Maybe a background that is done on a digital print and then layer it with a relief or an etching.”

His advice for students is to print as much as they can and to explore outside possibilities.

“But the most important thing is to believe in yourself, and just keep doing what you’re doing best, whether it’s working or not. You can change from print to sculpture to ceramics to whatever you want but really get involved and just keep doing and doing, but you have to believe in yourself,” Guerra said as an advice to students who want to pursue a career in printmaking.

The third International Horned Toad Print Exchange will soon be announced at ManuelGuerra.net.