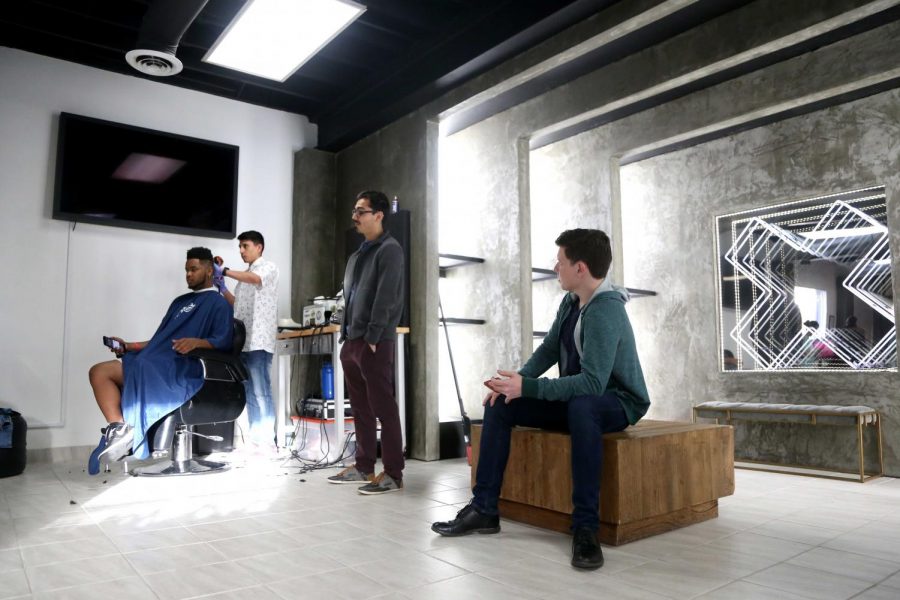 Attendees line up to get a hair cut at the Outpost Pop Up Pit Stop on Thursday, March 15.

The Outpost, located at 2317 E Missouri Ave, has been a stopping point for touring musicians to mentally recharge and rest at a quaint, comprehensive spot in town.

On Wednesday and Thursday, March 14-15, the local venue hosted a Pit Stop event that housed bands coming through El Paso to Austin for South by Southwest (SXSW).

“This place is the tone that it’s okay to live here. Setting the tone for what’s next in El Paso,” said co-manager Caroline Vasquez. “You don’t have to go to Austin to go to South by Southwest, we have this right here.”

The event was entirely free for artists and bands passing through the area and was sponsored by The Outpost’s donors.

“We want to incorporate as much of the community as we can,” said Marisol McNeil, the other co-manager of The Outpost. “Anyone who RSVP’ed can come out.”

Initially The Participation Agency, a New York  advertising and marketing company, searched for different locations across the country to house the first Outpost location.

Evidently, El Paso became the first Outpost spot, followed by the second in Asbury Park, New Jersey. The agency hopes to open up to 10 locations across America in years to come, according to the managers.

“It’s a huge hub for people to come,” Vasquez said. “We’re a sophisticated rest stop. We can’t necessarily house bands, but we can set them up with hotels to stay at.”

During the Pit Stop showcase, The Outpost invited the community to check the place out while meeting with various local and touring bands, artists and DJ’s headed to SXSW, including SadGirl.

One may ask, what it costs? How can it make a profit by offering themselves to different bands for free? A simple hashtag and a thank you is all the management wants.

“All we ask is that bands #OutpostCity on their social medias,” Vasquez said. “More love for the brand, more ways to keep the brand.”

At any given day of the week, artists can come through to relax, do laundry, surf the internet, record music and take some items from the merchandise store—all completely free of charge.

“Our whole concept is to give back,” McNeil said. “Importance is to give back to these touring bands who could use the help. Free stuff equals less cost for the bands to have to go out and buy stuff.”

In less than a year, their success speaks for itself. It has been a stopping spot for over 230 bands, including big names like DRAM, Goldlink, Blackbear, Cuco, Deorro… the list goes on and on.

“(The Outpost) has influenced bands to come here. Jared & The Mill came and set up a pop-up acoustic set.”

The future is bright for The Outpost, who will enter year two come May. But for Wednesday and Thursday, The Outpost became “two-day party,” according to McNeil.

Thank you for sorting us out with some cool things Outpost. #outpostcity pic.twitter.com/ELaQDZcqs3