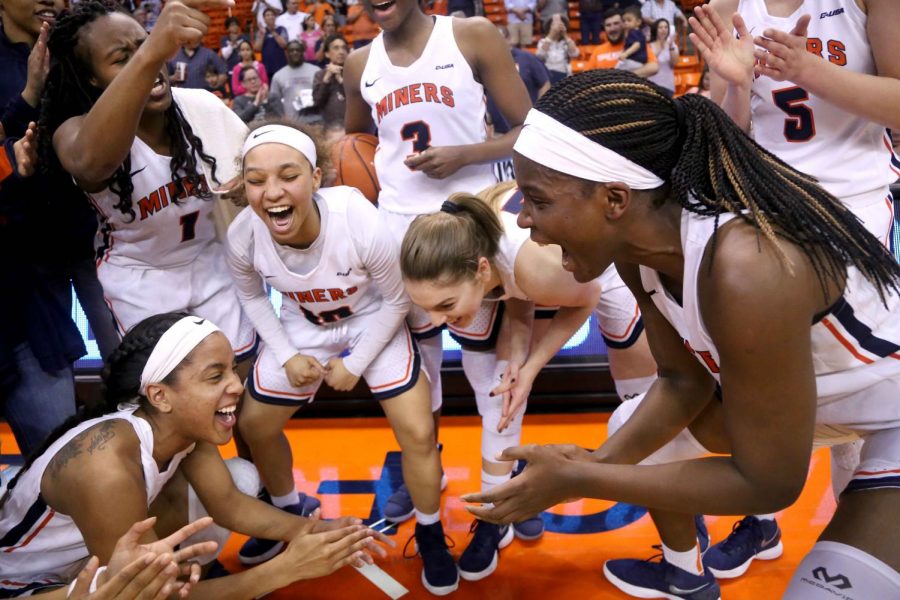 The Miners celebrate their 80-75 win against WKU on Saturday, March 3 at the Don Haskins Center.

Senior forward Tamara Seda saved potentially her best game of her UTEP career for her final home game in the Don Haskins Center.

“I’m going to remember this moment forever,” Seda said. “I didn’t want to go out my last game losing, this means a lot to me, i’m going to cherish it forever.”

The senior scored 13 of her 21 points in the fourth quarter, including two free throws in the final seconds to help the UTEP women’s basketball team defeat C-USA co-leader and defending regular season champion Western Kentucky, 80-75 on Saturday afternoon, securing the team’s best win over a league opponent in two seasons.

“We just had to come out and play our game and have fun,” Seda said. “Everybody stepped up today and made big shots, great defense, it was just fun.”

UTEP has won back-to-back games in C-USA play for the first time this season. The Miners had dropped their previous five before picking up a momentum shifting win over FIU (86-70) this past Thursday.

“I’m really proud of our team,” said UTEP head coach Kevin Baker. “I think going through that tough stretch where we lost five games in a row really is the thing that propelled us to win, not just today but Thursday as well. We came out in the first half and kind of hung with them. When that happened it woke our team up and we felt like we could do this. Obviously this is one of our best performances of the year.”

Jordan Alexander tallied her career-high with 19 points, grabbing six rebounds in the win.

“Today was dedicated to T (Seda),” Alexander said. “All games we play hard but this one especially with this being her (Seda) last game here (Don Haskins Center), we had to go out with a bang.”

Zuzanna Puc, who tallied a career-high of 27 points in the win over FIU on Thursday, earned 19 against the Lady Toppers while Katarina Zec pitched in for nine points and a career-high seven assists. Puc also established a personal high with five assists. Overall, UTEP dished out a season-best 23 assists on 30 field goals made.

The Miners trailed the entire first half but grabbed their first lead of the game (33-32) at the 8:20 mark of the third period and headed into the fourth quarter with a 51-50 lead.

In the fourth, it was the Miners who had the quick start, extending their lead to five twice in the first four minutes of the frame. Both times, WKU immediately answered with a 3-pointer from Sidnee Bopp. Consecutive scores by UTEP following Bopp’s makes made it a six-point contest (66-60) with 5:26 left but a mini 6-0 run from the visitors tied the game up.

With the game tied, Seda used an old-fashioned 3-point play to break the eighth tie of the game, giving UTEP the lead for good. Seda also finished 5-6 from the charity stripe over the final 31 seconds, including the two makes with four seconds left to seal the win.

“How perfect was it for her (Seda) to play her last game ever at the Haskins Center and go to the free throw line with a chance to win the game for her team?” Baker said. “It couldn’t have happened to a better player, couldn’t have happened to a better person and the Miners are going to miss Tamara Seda but Tamara Seda is going to go on and do big things and i’m just proud to know her.”

WKU’s Ivy Brown fouled out late in the game with 31 points that led all scorers.

With the win, UTEP secures the No. 9 seed in the Conference USA Tournament and will face the No. 8 seed Southern Miss Golden Eagles in the opening round on Wednesday, March 7 at 10 a.m. MST at The Star in Frisco, Texas. The Miners dropped their lone matchup with the Golden Eagles, 60-53 in Hattiesburg, Miss., on Feb. 25.