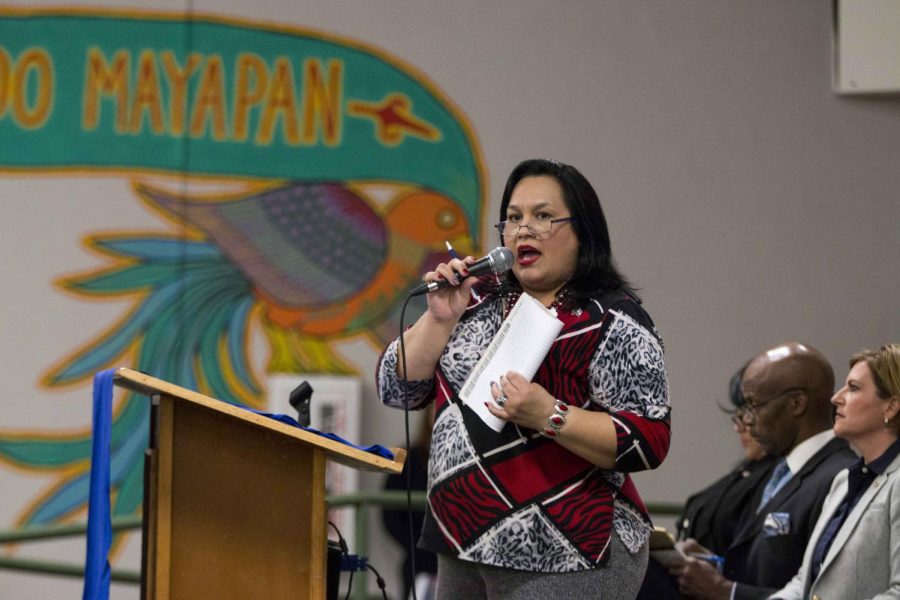 Alia Garcia-Ureste is running for the 16th Congressional District seat.

With six Democrats competing in the primaries to replace U.S. Representative Beto O’Rouke’s vacant Congressional seat, and El Paso being one of the steady blue counties in the state, Republicans are not often thought of as top contenders.

Even so, Republican candidate for the 16th Congressional District, Alia Garcia-Ureste, believes she has to run.

Garcia-Ureste is currently the Madame Commissionaire of the Texas Holocaust and Genocide Commission, which creates awareness of the Holocaust as well as other genocides around the world. She was appointed by Governor Greg Abbott in 2014.

“I realized, gosh a lot of the things that I’m doing anyway could help at the congressional level, I chose to run for Congress in this district,” Garcia-Ureste said.

“What I hear more in this district in the six years that I’ve been here, not being able to find a job after you graduate college, and if you do, how low the wages are. That’s what I think are on people’s heart and mind,” she said.

She wants to encourage small businesses to open up in El Paso and says they can be a great contribution to the local economy.

“I encourage the kids at UTEP, get your college degree, but start at least on a part-time basis a small business,” Garcia-Ureste said.

Garcia-Ureste also said that she would advocate for public-private partnerships to help city projects. She said that the medical portion of UTEP’s Professional and Public Programs is a successful example.

“It would be terrible to increase our taxes, but without that tax money, then you don’t have a lot of funding for your programs, so where is that extra money going to come from? It’s going to be from partnering with these private organizations,” said Garcia-Ureste.

She said that green companies—companies that are trying to be environmentally friendly—could be a path forward to help the El Paso economy. She points to her own successful business that cleans up after oil and gas companies.

“Little did we realize cleaning up Mother Earth was going to replace two incomes,” Garcia-Ureste said.

Garcia-Ureste claims that one of El Paso’s strong points is that the economy does not rely on oil and gas like much of Texas. But also that oil and gas companies are coming to El Paso, given the drilling for shale oil in Hudspeth County.

She wants El Pasoans to take advantage of the coming gas and oil industries and open up green companies, believing that there is a market need for new business startups that recycle pollution.

But she also says that solar and wind energy are not likely to replace oil and gas anytime soon.

“That won’t replace our need or our electrical grid, but we can combine all these alternative energies and we can put forward some jobs and in good numbers,” said Garcia-Ureste.

She also wants to reduce the deficit.

“We’re in a lot of debt, both foreign and domestic, numbers are moving up and down, and as always it’s up to the taxpayers. It’s people like us–the working class—we are going to have to answer the question of how are we going to balance the budget,” Garcia-Ureste said.

On immigration, Garcia-Ureste said that she supports President Donald Trump’s idea for a wall, but calls for a “smart wall,” which she compared to the wall that is used in the Israeli West Bank Barrier.

“We are a sovereign nation, we need to know who is coming and going, especially if they are not asking our permission to come in,” Garcia-Ureste said. “We know that the majority of people who are crossing the border are not criminals, but the ones who are, they’re a real danger.”

She said that she does feel for Dreamers, but that she wished they had come to the United States in a legal way. She also said that there are many Texans who descend from land grants given by Texas when it was a state and a Republic that many Dreamers may have descended from.

“In Texas alone, land-grant community estimates there is between three and nine million Tejanos that descend from the original recipients of these land grants,” Garcia-Ureste said. “How many of those 11 million that are undocumented, and how many of the 1.8 million might have this genealogy too?”

She said that descendants from those land grants could be a legal pathway to citizenship for the 124,000 DACA recipients in Texas.

Like her fellow Republican candidate, Garcia-Ureste is not at the top of the list when it comes to total funds raised.

The majority of her campaign funds have come from her recycling company. Her total contributions are $165, with $5 from her own funds.

The top two contenders for the Democrats have raised significantly more, with Dori Fenenbock raising nearly $1 million and Veronica Escobar just over $800,000.