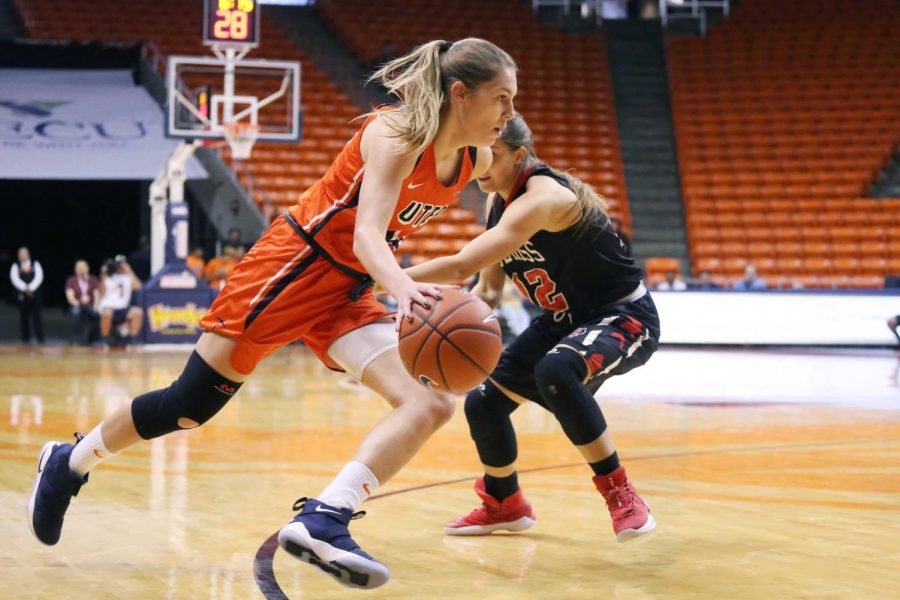 Katarina Zec was born in Belgrade, Serbia, and played on the U20 Serbian National Team.

It’s hard to tell exactly what in a player drives them to play their best game.

For UTEP sophomore point guard Katarina Zec, it was getting the chance to play collegiate ball at the Division I level in the United States—the opportunity of a lifetime.

“I just wanted to go to the United States,” Zec said. “Coach Eva (Laskowska), the assistant coach from last year, approached me and I was ready to go.”

For the Serbian-born player, growing up was anything but ideal for someone who just wanted to enjoy their childhood and play basketball.

“I was born in Belgrade, Serbia, in 1997, and the two years before that and two years after that there was a war,” she said. “So I grew up in a war country, with economic, political and social crisis, and the struggles (financial) are still going on today.”

Despite these everyday challenges, Zec said she always found a way onto the court.

“My mom (Natasa Zec) was a basketball coach for little kids, so I started playing when I was 8 years old,” she said. “I played throughout primary school and high school before I received an invitation at 15 to be on the Serbian national team.”

With the U20 Serbian National Team, Zec helped her team take fourth place (Division A) at the 2016 European Championships, averaging 6.7 points and 3.6 rebounds in the event. She nailed 41.9 percent of her shots from the floor, while going a perfect 9-for-9 at the charity stripe.

More importantly, landing on the national roster gave the future Miner some confidence heading into her collegiate career.

“It was a pretty good experience,” she said. “You got to feel some honor and pride for getting the opportunity to play for your own country.”

While coming to the U.S. is a dream for many across the seas, Zec knew she had to make the decision to come to the U.S. to both save her basketball career and to learn in the classroom at a high level.

“I decided because I didn’t have the opportunity to play basketball at a professional level and go into a school at a higher level than what was there (in Serbia), I just had to move to the United States because they (UTEP and Wyoming) offered me that opportunity,” she said.

Zec signed to play basketball with UTEP over Wyoming in 2016, and enrolled in school as a biochemistry major for the fall semester later that year, which was her first as a collegiate student-athlete in the U.S.

“It took time to adjust and completely focus in school because it was a real challenge to write the English language at first,” she said. “My academic English was not at a great level at the time. I could talk and communicate, but someone had to check my spelling and grammar. Now I don’t need any help, I’m completely fine.”

First-year head coach Kevin Baker knows about the challenges Zec had to go through from getting to know her, but is surprised how far she has come in adjusting from what she has told him.

“Can you imagine how scary it must be to come from Serbia and play Division 1 basketball while trying to learn a new language on a new campus and in a new city?” Baker questioned. “With familiarity brings confidence and that’s where she is now.”

As a freshman, Zec missed part of the season due to a dislocated kneecap during a practice in early December 2016, which sidelined the newcomer for six contests. Around her injury period, the freshman was productive in 25 appearances and 19 starts, averaging 5.7 points per game in 20.8 minutes played, while shooting 41.4 percent from the field and 77.8 percent from the free throw line.

This season, Zec has become more of an all-around role player, but her ability as a 3-point sniper is also her most favorite thing about her game.

“I feel really confident when I shoot the 3,” she said. “It feels even better when it’s a clutch shot, but I also like playing defense because I normally have the job of defending the other team’s most dangerous shooter.”

Although he didn’t recruit Zec or see her during her freshman campaign, Baker knows how much Zec has improved since he took over the reins of the women’s basketball program.

“When we first got here, we didn’t really know what hand we were dealt,” Baker said. “It’s amazing to me to see how far she’s come in such a short period of time–to be that player we can count on consistently to score and guard night in and night out.”

So far this season, the sophomore is second on the team in field goals made (94), 3-pointers made (35) and 3-point shooting percentage (36 percent). Zec leads the team in free throw percentage with an 87 percent clip (40-46) and averages 9.7 points per game. 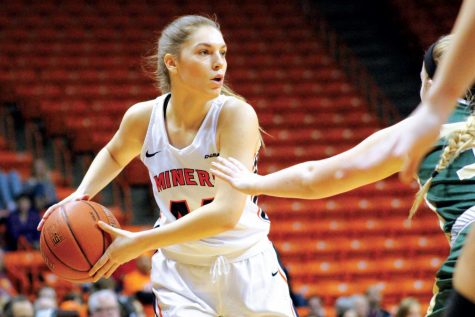 Her best game of the season came against rival New Mexico State on Dec. 10, where she tallied a career-high 22 points with seven 3-pointers made in the 76-68 road loss.

“I remember I shot my first 3 that day in the corner off an inbounds play and it went in,” she said. “After that, I shot every single one (3-pointer) that I was open for. They didn’t cover me the whole game and I just kept shooting them the whole game.”

The Miners opened the 2017-18 season with a 4-0 start that gave Baker the best start for a first-year head coach in program history but the team has now lost nine of their last 13.

“She hit those seven 3’s against NMSU and hasn’t had a game like that since,” Baker said on Zec’s recent struggles. “The teams we play now have (their) game planned to her side of the court.”

As a team, the Miners have lost five straight and find themselves in the No. 12 and final spot needed to make the Conference USA tournament next month.

Zec knows that if her team is going to snap the losing streak, she will need regain her scoring touch.

“We all need to lock in and have a sense of urgency,” she said. “I keep thinking about these games and I know I shouldn’t because it’s about executing on offense, defense and scouting the next opponent.”

Zec and the Miners will return to the Don Haskins Center this Thursday, March 1, to take on the FIU Golden Panthers.

UTEP defeated FIU 77-76 in the first matchup this season in Miami on Jan. 5 in the C-USA opener for both squads. Now with 13 conference games sandwiched in for each team since they last met, the two now stand side-by-side in the C-USA standings at the 12 and 13 spots, with just one game separating the two schools.