Miner softball falls in Battle of I-10 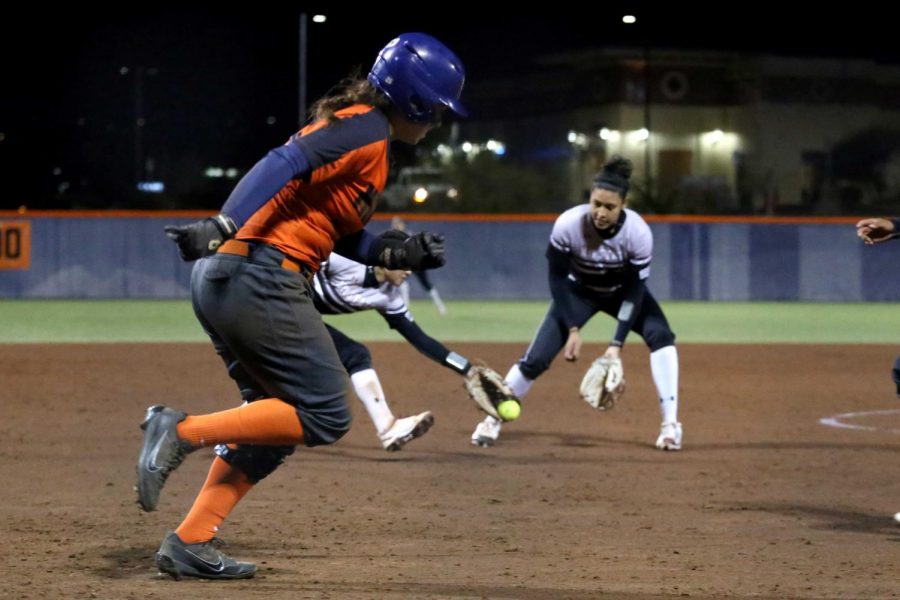 Junior Kacey Duffield attempts to advance on base.

The UTEP softball team lost their home opener on Tuesday, despite out hitting the rival New Mexico State Aggies 10-9.

It was the Miners fourth straight game with double digit hits.

The Miners were unable to overcome the Aggies in the run column however, due in large part to untimely errors and an uncanny inability to get batters out with two-outs on the board.

“It’s something that we keep talking about – just have some confidence,” UTEP head coach Tobin Echo-Hawk said following her team’s seventh loss of the young season. “There were plays that we should have made.”

Echo-Hawk added that leftfielder Mariah Ellis made the start in the outfield for the first time this season – where she made a run-scoring error – because other players were sick.

Even though the Aggies scored six runs off of starting pitcher Devyn Cretz in the top of the third inning, only two were earned. The Miner offense also came through in the bottom of the fourth to mount a comeback of sorts, led by Ellis.

The UTEP number six hitter blasted a two-run bomb deep to left-center that cleared the fence, and the rock wall beyond it, to land in the driveway to the newly built dorms beyond the walls of Helen of Troy field. Asked after the game if she could hear the audible gasp from the crowd following her bat launching the ball, Ellis responded with a smile.

“It was just a great feeling overall,” Ellis said with a laugh.

The Miners were led at the plate by Ellis, second baseman Courtney Clayton (2-for-4), first baseman Taylor Sargent (2-for-4, RBI) and rightfielder Pamala Baber (2-for-4).

Although the first round of the “Battle of I-10” may have gone to the team from Las Cruces, the Miners took heart in their comeback from a six-run deficit, despite the loss.

“I don’t think (the team) is happy with this outcome,” Echo-Hawk said. “I think they’re happy with fighting and staying in it, but I think they knew that they kind of beat themselves a little bit with the six runs on two-outs.”

The Miners and Aggies will face off again during a doubleheader on March 27 in Las Cruces.

Before then, the Miners will be hosting the UTEP Tournament this weekend which sees them face Portland State and Idaho State. The first game, against Portland State, is Friday at 3:30 p.m.