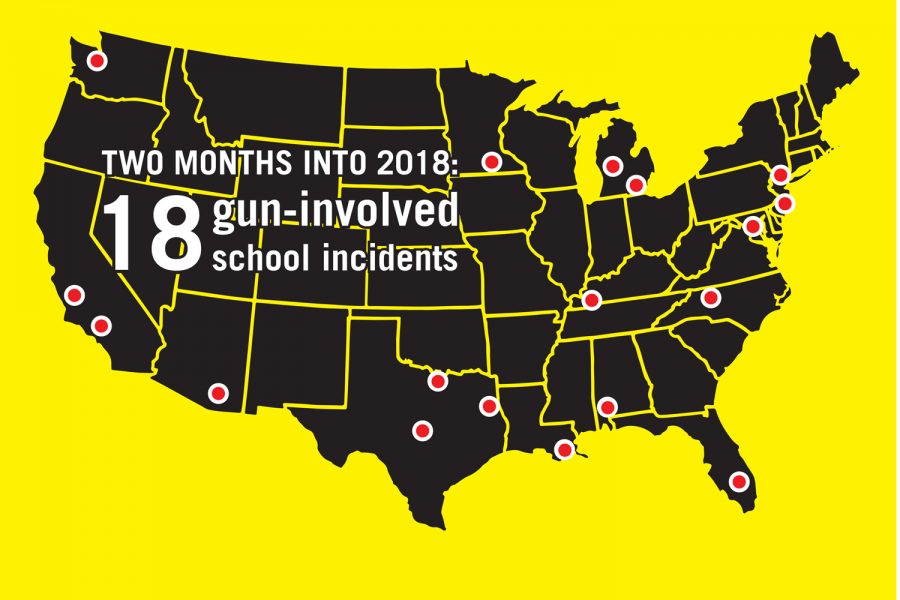 The students of Marjory Stoneman Douglas High have now been added to the list of 150,000 American students who have experienced a mass shooting since the Columbine High School massacre in 1999.

This year, there have been 18 school incidents that have involved guns. While not all shootings involved injuries, they range from suicides, students firing guns into the air and arguments that led to shots fired. Three incidents in Texas, Kentucky and Florida were considered mass shootings. In all, 20 were killed, 21 wounded and two committed suicide.

On the border, city and state representatives are weighing in on where they stand on gun control and mass shootings in schools.

Last November after the shooting in Sutherland Springs, Texas, it was discovered that the shooter would not have been able to legally purchase the rifle he used if the Air Force had entered a domestic assault conviction into the National Instant Criminal Background Check System (NICS). Sen. Cornyn introduced the Fix NICS Act of 2017 as a response to the perceived gaps in the federal background check database.

“The failure to upload this essential, and required, information in the background check system is simply unacceptable,” Cornyn said in a statement two days before the Parkland, Florida shooting.

Cornyn said that he is open to sitting down with Senator Dianne Feinstein, D-Calif., who said at a recent Senate Committee hearing that she was open to working on Cornyn’s bill, of which Feinstein is a co-sponsor. She also said that a compromise could be reached on the regulation of bump stocks, which allow firearms to be turned into automatic weapons.

Cornyn’s bipartisan bill has not made it past the Senate Judiciary Committee.

On Monday, CNN reported that the military rushed to add 4,000 names to NCIS after the Sutherland Springs shooting. The shooter, who killed 26 people, would have been on that list.

President Donald Trump told Cornyn that he would be open to open to a background check fix.

“While discussions are ongoing and revisions are being considered, the president is supportive of efforts to improve the Federal background check system,” said Press Secretary Sarah Sanders in a statement.

In June of 2016, O’Rourke took part in the nearly 26-hour sit in by House Democrats, in which they tried to force a vote on gun control legislation, following the Orlando massacre.

O’Rourke told the story of his uncle, Raymond O’Rourke, former sheriff’s deputy, who he says taught him how to shoot a gun.

“That man loved his guns and cherished the Second Amendment, but that man understood that you can defend the Second Amendment and still make sensible laws to protect lives and improve public safety,” O’Rourke also said at the sit in. “The people I represent in El Paso, Texas, understand that, the people in America get that.”

Now challenging one of the nation’s most prominent Republicans (Ted Cruz) for his Senate seat, the entire state is seeing what he has to say about gun control.

“My thoughts are with the families, the children, the teachers and staff who are surviving this shooting in Parkland. I don’t accept this. What we are doing to protect kids, spare families these tragedies, is not enough,” O’Rourke said in a tweet on Wednesday following the news of the Parkland, Florida shooting.

On his medium page, a blog site, O’Rourke went on to write, “We can’t simply react as though these are natural disasters, In response to a question from the Texas Tribune last year, O’Rourke said he believes in ending the sale of bump stocks.

In response to the Florida shooting, Sen. Cruz said that gun control is not the answer during a “Fox and Friends” interview on Thursday.

“I was at the hospital with the victims and the victims’ families (in Sutherland), over and over again what they said to me, they said ‘gun control is not the answer here,’” Cruz said, recalling the Sutherland Springs shooting when asked about the banning of automatic rifles as a Democratic response to the Florida shooting.

Cruz went on to say the answer is to focus on violent criminals.

After the Sutherland Springs shooting, Cruz said that the shooting should have been stopped because the Obama administration did not report the shooters’ convictions.

Sen. Rodriguez released a statement in the wake of the shooting saying he is appalled that the NRA and their lobbyists have such a stranglehold on Congress.

“They won’t even pass common sense measures that most of us agree on like banning assault rifles and bump stocks or universal background checks. How many lost lives is too many? How many kids have to die? At what point will those in DC and Austin say ‘enough is enough’ and stand up to the gun industry instead of offering their ‘thoughts and prayers?’ The same holds true for the Texas Legislature,” Rodriguez said.

In 2015 and 2017, Rodriguez filed legislation to create a lethal violence protective order, which focused on people who have already demonstrated violent behavior or made threats by allowing families and law enforcement to ask a court for a civil order to temporarily reduce that person’s access to guns.

“Despite the increasing number of mass shootings taking place in our country and widespread support from organizations like Texas Gun Sense, National Alliance for Mental Illness, League of Women Voters and the Texas Municipal Police Association, my bill (SB 434) didn’t even receive a hearing because Senate leaders were unwilling to risk the wrath of the gun lobby,” he said.

School security at Ysleta High School and Burges High School was increased on Friday over alleged threats. The threats were reported to YISD and EPISD from social media apps according to district officials.

In El Paso, EPISD is on spring break on March 14, however, the Women’s March sector here is organizing a “walk for our lives,” walkout on April 20, which is the anniversary of the Columbine High School shooting.