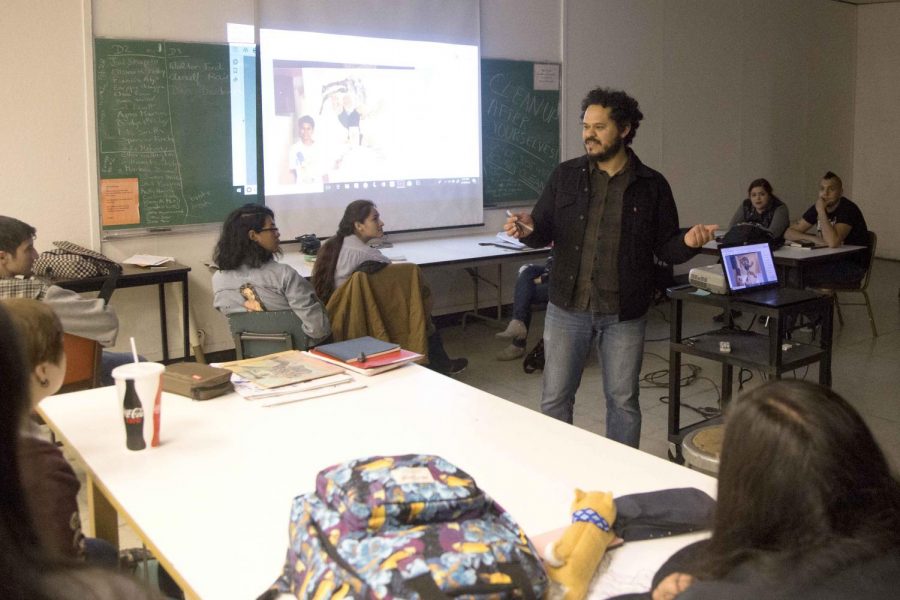 Former UTEP art students and partners Raúl Gonzalez (known as Raúl the Third) and Elaine Bay will offer a workshop on campus regarding their collaborative process on how to craft and promote their illustrated books.

The workshop will be held at the Fox Fine Arts 453 drawing classroom on Tuesday, Feb. 20, available for the first 30 students to RSVP by email with professor Terri Bauer.

“Anyone who is interested in illustration (especially relative to book illustration) and the book publishing business, should find the workshop helpful,” Bauer said.

Due to limited amount of space in the classroom, the workshop will be available only for those in the art department. Students are expected to bring a sketchbook, pencils and pens and will have time to do hands-on work.

“When you’re starting out as an artist, there’s a lot of, how in the world do you even make it? How do you get your foot in the door? How do you get published?” Gonzalez said. “I hope the students get from the whole workshop a little glimpse behind the curtain to learn all of the different steps that an artist, author and illustrator has to take to make the books that they see on the bookshelves.”

Bay is a multimedia artist, who works from video to printmaking, and gains inspiration from historical and current events to simply “everything surrounding her.”

“I use Adobe Photoshop, Premiere and sometimes html on a Cintiq,” Bay said. “I also use various cutting tools, scissors, cameras and will try any kind of paste or gold spray paint available.”

Gonzalez has worked as an illustrator with author Cathy Camper on the comic series “Low Riders in Space,” winning an Pura Belpré Award from the American Library Association for his work on the second volume of the series. Gonzalez’s tools consist of ballpoint pens in the colors red, blue, black and green.

“When I was a kid, I was already pretty sure what I wanted to do with my career at that point,” Gonzalez said. “That evolved to wanting to become both a children’s book illustrator and a comic book artist.”

The couple shares a studio at home in Boston, where they are currently working on comics of “SpongeBob SquarePants,” a new line of Versify books curated by Kwame Alexander, and a book called “Vamos, Let’s Go” with Houghton Mifflin publishing. The book “Vamos, Let’s Go” is written and illustrated by Gonzalez, and the coloring and layout is done by Bay.

“We have formed artist collectives, worked on many graphic art projects, fine art pieces and installations, self-published zines and a kid,” Bay said, embracing their son, Raúl the Fourth.

“Raul was a student of mine in a basic design class, and Elaine was in a basic drawing 2 class that I taught,” Bauer said.“Elaine spent a lot of time in printmaking, while Raul was drawing non-stop. They both were totally engaged in their artmaking, passionate, creative and a bit crazy in a fun way.”

Before attending UTEP, the couple met in Coronado High School. Gonzalez dropped out of college, while Bay finished her bachelor’s degree in printmaking in 1999 with concentrations in sculpture and film.

“I really started to develop as an artist when I followed  Elaine to the Boston area,” Gonzalez said.

Bay received her master’s degree of fine arts from the School of the Museum of Fine Arts in Boston.

The last time the couple visited UTEP was two years ago to visit their former professors. Besides the food and the people, both are looking forward seeing those who helped them become the artists they are today.

“We hope to come to El Paso and UTEP this week to just really share our experiences with some of the younger artists,” Gonzalez said. “I’m pretty sure are wanting to go out into the world and make the best possible art they can do one day and return the favor themselves.”

A piece of final advice they give to younger artists is to learn as much as they can from every project in order to discover themselves.

“Try not be so quick to define yourself as being only one particular type of artist, and take risks and chances to learn,” Gonzalez said.

Paulette Villa may be reached at [email protected]