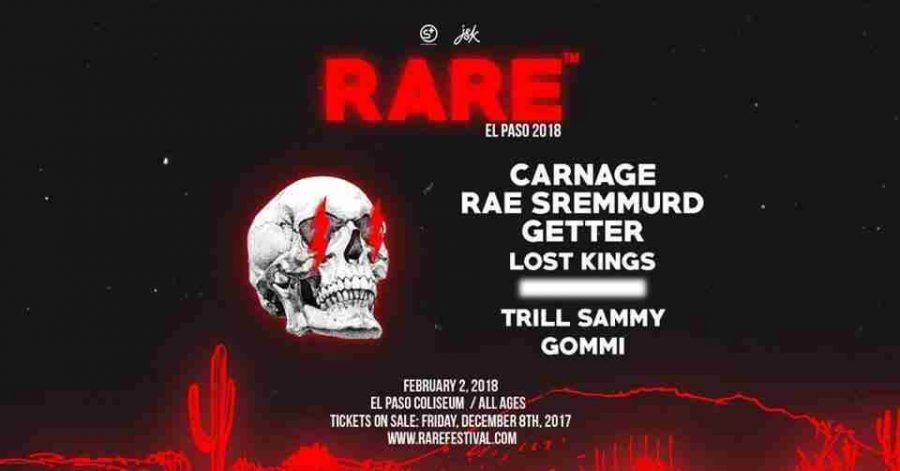 The venue was a bright red as the crowd started filling up the dance floor. The color on the screens was accentuated by crisp black lines outlining the animations. The visuals were very playful, colorful, and bright throughout the night.

As the event-goers settled in, the silence didn’t last long. The first performer of the night, Gommi, got the crowd pumped-up and set the atmosphere for the rest of the night.

His fast beats sounded like galloping horses. Bass drops with lots of alarm sounds were reminiscent of a younger Skrillex. It felt like the crowd was in an intense video game. Something along the lines of a savage rainbow road course in Mario Kart. He was very interactive, jumping a lot to get the crowd going, and it was noticeable he enjoyed his own music. Gommi’s “almost popped the speakers” kind of sound caused extreme vibrations throughout the venue, making his set hard to top.

The next performer, Trill Sammy, changed the vibes from intense techno sounds to lots of rap. With the help of the crowd, he stood ten feet tall and surfed the rhythmic waves his music provided. At one point, a mosh pit broke out, and not only were sick bars coming at you left to right, but also people.

Lost Kings were the third act, starting their set with what I can only describe as super-fast laser sounds. However, mid-set they went from trap to a little “Above and Beyond” style-wise. From then on, it was a mix of soft trance, mellow pop-rock, and today’s hits.  Too many different styles, not so smooth transitions, and leaving the crowd wanting something else.

This is when Getter comes in. Twisted cartoon visuals of dripping green slime coming out someone’s eyes came hand-in-hand with twisted beats and hard drops. The sound changed from laser sounds to machine gun rounds blasting through the speakers. He transitioned to more slow and rhythmic rap songs toward the end of his performance but compared to other artists his transitions were buttery and smooth.

A short five-minute intermission was made as the stage was set up for special guests Rae Sremmurd. Champagne showers and crowd surfing were not scarce. Mix that with giving El Paso a special sneak peek at three new songs, they made the crowd go wild. Fans went crazy when the duo picked up someone’s phone to record themselves on it, so at one-point, front row spectators were throwing their phones on stage hoping for the same outcome. All-in-all, they were the perfect set-up before Papi Gordo came up.

A multitude of fans came charging to get to the front of the stage as Carnage greeted the city with his house and hard-style trap sounds. Red laser beams and white strobe lights illuminated the venue, as his set started. He put his own spin on songs like LCA by GTA, Maluma’s Mi Gente, Daddy Yankee’s Gasolina, and Get Low by Lil John. He also performed, for the first time, his new hit single coming out on March 2, with the rest of his new album. El Paso’s own Evander Griiim joined the DJ on stage along with all the past performers mid-set. The crowd experienced Rae Sremmurd climbing on stage props, Evander Griim diving into a mosh pit, girls getting picked to dance with the performers, and Carnage dominating the stage with his sounds.

Finally, the Chipotle Gang’s leader didn’t leave without dropping his own tracks like Chupacabra, I Like Tuh, Toca and Xan Man before he went over three minutes of his allotted time and got cut off by event planners.

However, by the crowd’s request and inspiring motivation to give the best show, Carnage came back out for an encore. It was at this time that he announced Lil Pump would have been the special guest, but due to a family emergency, he could not perform. The stage was winding down as Carnage said his last goodbye to the El Paso crowd, marking the end of the second RARE Fest the city experienced.