Tilghman continues the fight to stay on a ballot 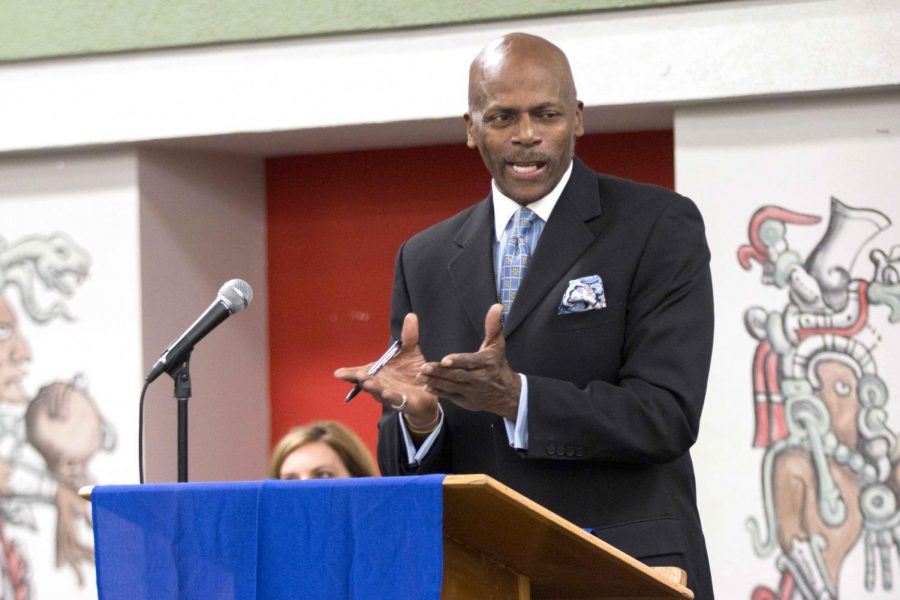 Jerome Tighman is running for the 16th Congressional District seat.

For Jerome Tilghman, winning the election for the 16th Congressional District seat is not as important as educating citizens about the impact the government has on citizens’ lives.

But that does not mean that the retired Army major and current middle school teacher does not want to win the election.

This is not the first congressional race Tilghman has campaigned for. In 2012, he ran against incumbent Sylvestre Reyes, alongside Beto O’Rourke—who was then a member of El Paso’s city council. Tilghman finished third in the primary, with Reyes losing his seat to O’Rourke.

Tilghman also ran for city council twice as well as county judge, but lost all of his bids for election.

Now, as O’Rourke sets his sights on Senator Ted Cruz’s seat and leaves the 16th District seat open, Tilghman is hoping to win this time.

“I was not planning for a run for the 16th Congressional District seat after 2012,” Tilghman said. “But then when Congressman O’Rourke decided to make a run for the United States Senate, the seat opened up and there are policy decisions that I thought were left on the table that I still think we need to represent.”

After graduating from UTEP with a bachelor’s degree in education, Tilghman was an instructor before he realized that students were not prepared for college.

So he went back to UTEP and received his certification for elementary and secondary school, where he was assigned to Basset Middle School.

“We are allowing students to graduate with an empty suitcase. They’re all packed up and ready to go, but when you go to the destination, the next classroom, and open up that suitcase and it doesn’t have the toiletries, the underwear and socks of academia that they need to do well. And I’ve been doing that for the past 16 years,” Tilghman said.

Tilghman blames the city’s poverty rate on the lack of education children are receiving. According to census data, El Paso has a 22.7 percent poverty rate, compared to the national level at 12.7 percent.

The census also showed El Paso has only a 21.7 percent rate of individuals over 25 years of age with a bachelor’s degree or higher.

Tilghman is also an advocate for increasing trade and vocational work to decrease the city’s unemployment rate, which has improved since the 2008 recession, but is still slightly above the state and national average, according to a recent report released by Workforce Solutions Borderplex earlier this month.

“What we have done by deglamorizing vocational education, is creating a skill-set void,” Tilghman said.

He wants to implement more vocational classes in high schools so people who don’t want to pursue a college degree can start their own career and see the benefits earlier than the university pathway.

Tilghman was also the development director and vice president for membership at the Greater El Paso Chamber of Commerce.

“One of the fallacies in the way we do business here is that we have print and broadcast media, who preordain who we should pay attention to, and the sad news is dollars become the discriminator,” he said.

Tilghman has not filed any reports to the Federal Election Commission that would detail any money raised for his campaign. His top opponents Dori Fenenbock has raised nearly $600,000 and Veronica Escobar has raised around $332,000.

Escobar was recently endorsed by Democrat Minority Whip Rep. Steve Hoyer, D-Md, and he has promised to campaign for her as well.

“I don’t know if there is a way to overcome it, as much as it is trying to match it, with a message that will reach the $25-$30 contributor,” Tilghman said when asked for comment. “Just because you got the most dollars does not mean you make the most sense.”

Tilghman said that Hoyer’s endorsement means that Escobar will not create the kind of change Tilghman is looking for. It ends up being what he calls “a race to the bottom.”

Back in the 2012 congressional race, Tilghman said he remembers O’Rourke’s campaign promise to improve Veterans Affairs in El Paso.

“We oftentimes focus on those wounds that we can see–the guy who has lacerations, has a broken arm or needs a prosthetic limb,” he said. “But where we are seeing the crises is in the absence of psychological services.”

Last November, the El Paso VA received one star out of five, with one being the worst, for the second year in a row. While all of the categories fared better than the previous year, mental health continuity continues to mirror the same lack of change.

“We still got soldiers coming off the battlefield, without adequate healthcare for them,” Tilghman said. “When we make decisions at the national level, I live with them, because those are my services. If (Escobar) stumbles, or if any of them stumble on policy, their healthcare systems are going to stay unchanged.”

One of the first things that Tilghman said he wants to do if he wins is advocate for a “common sense immigration policy.”

He says that the best way to get Republicans to agree to provide a pathway to citizenship for DACA recipients is to talk in terms of economics.

With the population growth rate slowing down in the United States, Tilghman said that DACA recipients could help alleviate the loss in the labor force.

“Where is that labor force going to come from if we are not having babies at the rate that we used to make?” Tilghman said.

Tilghman said that he appreciated O’Rouke opened trade with Ciudad Juárez, but he did not secure El Paso’s ports of entry enough, which allowed for an increase in drug flow to the United States.

“You got to get a system in place to get after that,” he said. “Well guess what? (O’Rourke) didn’t do it. You know that the leading cause of death in the United States right now for people 50 and below is overdose, those narcotics are coming through the 16th Congressional District and other border districts down here.”

Tilghman said that because he doesn’t have the same amount of money as his candidates, he is not treated as a viable candidate.