‘Aliento a Tequila:’ a visual journey about the making of tequila 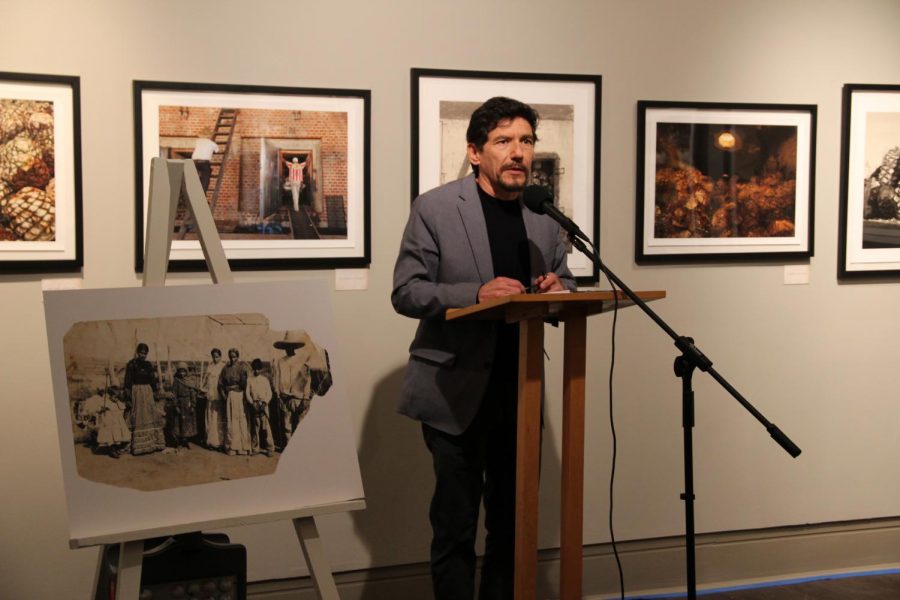 Photographer Joel Salcido speaks at the opening reception for “Aliento a Tequila,” a series of photographs that narrate Salcido’s expedition on the making of tequila in the state of Jalisco, Mexico.

On Saturday, Jan. 20, the Centennial Museum held an opening reception for the exhibit “Aliento a Tequila,” a series of photographs by Joel Salcido. The exhibition narrates Salcido’s expedition about the making of tequila in the state of Jalisco, Mexico.

“This has been an incredible journey for me, which started with a leap of faith based on ignorance,” Salcido said. “The vehicle towards discovery was what I’ve always known to be the tool I communicate with, the camera.”

Salcido was a photojournalist at the El Paso Times in 1979, but he decided to leave in order to pursue an artistic path in his career. He currently lives in Austin, Texas, with his family and has exhibited his work in Texas.

“I am a UTEP graduate, and I remember coming to this same gallery looking at pictures and dreaming of when will it be my turn, and thanks to you, this why I am here today,” Salcido said.

Approximately 50 people attended the reception, consisting of UTEP students, faculty, staff, along with Salcido’s family and friends, both from Mexico and the U.S. In order to set the mood of Mexican pride at the event, the reception provided a bar selling tequila and a variety of free food, such as flautas, rajas con queso and totopos with pico de gallo. As the finishing touch for the event, the mariachi group, Paso del Norte, provided live music outside the main entrance of the museum.

“Salcido’s work discloses the amazing history, culture and biodiversity of Mexico,” said Daniel Carey-Whalen, director of Centennial Museum. “As everyone knows, in this political climate, it is more important now than ever to look at all the good things that are coming out of Mexico, one of those being tequila.”

Joel Reyes Gutierrez, a 66-year-old attendee, said Salcido’s work is a very complete collection on the production of tequila.

“This collection is making us appreciate that when we are drinking tequila, we are also ingesting the hard work and land of Jalisco,” Gutierrez said.

During Salcido’s speech, a photograph taken circa 1908 of a family in Durango stood beside him, later he revealed that the barefoot girl in the center wearing a scarf was his mother, Antonia Salcido Ruiz. He dedicated the exhibition to her and his wife, and explained that the photograph is always with him in order to remind him of where he comes from.

“Art is autobiographical and it translates to what you see on these walls,” Salcido said. “Everything that I have done today is to give a positive light in our beloved Mexico and its people, which I love to death, and I hope we continue that path in this country, in this city and elsewhere.”

The museum also held a signing of Salcido’s book “The Spirit of Tequila,” which was published in fall 2017. The book contains a total of 89 photographs, of which some were exhibited in “Aliento a Tequila.” The book can be purchased online for $29.95 and the exhibition will remain at the Centennial Museum until May 19, 2018.