UTEP student lives his dream of becoming a painter 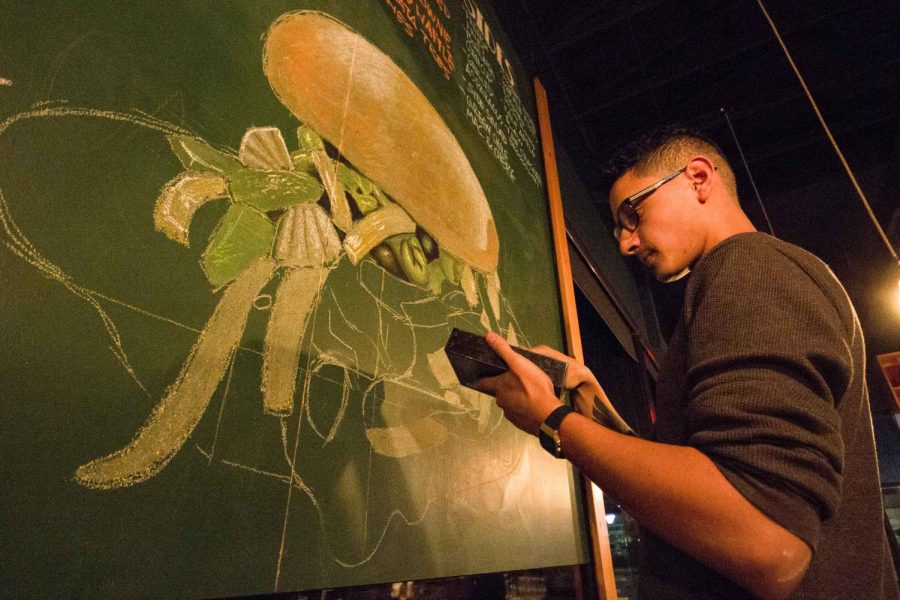 Babak Tavakoli-Nejad promotes his art by working at various restaurants in east and west El Paso.

Choosing a hobby as a full-time job is a dream many want to pursue, Babak Tavakoli-Nejad, a junior at UTEP, is doing exactly that.

Majoring in studio art with a focus on painting, he is slowly gaining recognition from his chalk artwork at various establishments in El Paso, allowing him to follow his dream of being a working artist.

“I didn’t have brothers to look up to, but I had cousins. They were really talented musicians. They could pick up any instrument and start playing it and I couldn’t, but I could draw” Tavakoli said. “I also looked up to my sisters, but I couldn’t really follow in their footsteps because I was just gifted differently.”

Before working as a chalk artist for restaurants and cafés such as Crave, Hillside Coffee and Independent Burger, Tavakoli had a variety of jobs.

Tavakoli worked as an animal caretaker for some time, as a mechanic assistant and currently works as a server at Malolam. However, a few months ago, he was given the opportunity to put his skills to the test.

Through the recommendation of Daniel Delgado, a friend and the previous chalk artist for Hillside Coffee, Tavakoli was offered the opportunity to do the artwork for their October calendar and has been doing so every month since.

Although his personal style is graffiti-oriented, the exposure he’s gotten from his chalk art has made it possible to put that background to use once again.

Tavakoli has a new project in the works involving a 640-square-foot mural.

“When you pick up a can of aerosol, no one knows how to control it. But over the years, I started to get more control over it,” he said.  “It made me appreciate the relationship of letters, where they all have to fit into the same style and have the same emotion. Not just that, but the color, the different effects you can give things.”

Tavakoli said he does not believe one should be risking their freedom to create art. With graffiti having negative connotations attached to it, artists run the risk of getting arrested and could lose their motivation along with other opportunities.

Tavakoli wasn’t always an art major, but he ended up changing his major to drawing because he was good at it. This semester, however, Tavakoli changed his focus to painting.

“I feel like if I became as good at painting as I am at drawing, then I could produce work that would impress me. I feel like the great version of myself is not a drawer… it’s a painter,” he said.

As he described how his practice has changed from his experiences with different artistic mediums, it was apparent that painting is his true passion.

Tavakoli described himself as an artist who doesn’t try to make art that is “fake deep” because he doesn’t always have metaphors or meanings in the things he makes.

Most of the time, he’s just having fun.  He does try to make sure the pieces he puts out represents how he feels at that moment.

“I’m trying to make something that you could look at, and then turn back at it and look at it one more time,” Tavakoli said.

Tavakoli said his dream project would be to become a traveling muralist. He follows artists on social media that are touring the world, bringing blank walls to life with their art, which is what he aspires to do.

“That would be my dream job. I decided I was always gonna travel, but I wanted to get my degree first,” he said. “And if I can do that, I think that would make me the happiest person ever.”

With art, just like with anything in life, you don’t get good until you mature. Until you hone your skill and style.

“Accomplishing that is the main goal of my art. If it’s not drawing that you do, if it’s writing, write every day. If it’s not writing, if it’s dancing, dance every day. Do it all the time and don’t stop doing it,” Tavakoli said. “You’re not going to become a master of your skill unless you do it all the time. I’m just trying to give birth to that, I don’t want to die before I reach that point where I’m making my great art.”

Aylin Tafoya may be reached at [email protected]