EPQBA works to engage voters in the LGBTQI community 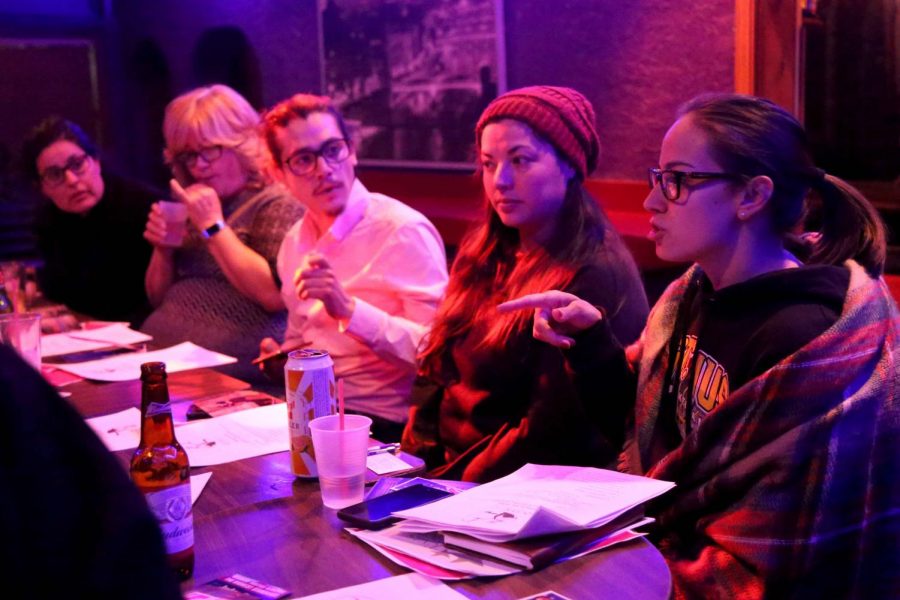 Members of the El Paso Queer Bar Association meet the first Tuesday of every month at the Briar Patch in downtown El Paso.

Most nights at the Briar Patch, one of El Paso’s hottest gay bars, you can find people dancing on the patio, socializing and drinking.

But once a month there’s a different mood at Briar’s, as openly gay attorneys join together to advocate for lesbian, gay, bisexual, transgender, queer and intersex (LGBTQI) rights.

The El Paso Queer Bar Association has evolved in the last few months as politicians have reached out to them for endorsements as they recognize the necessity of the LGBT community vote.

El Paso native Cynthia Lopez, president and co-founder of EPQBA and immigration attorney, lived in Chicago for nine years and moved back in March 2011 to open her own practice. Lopez noticed the LGBTQI community was not as connected as it could be, especially in the legal field.

“There was a lawyer’s association and bar association, but nothing for the LGBT community,” Lopez said. “I reached out to some friends and they were all on board and excited to do it, so we just started meeting and organized and started putting everything together.”

In 2015, Lopez was motivated to form EPQBA—an association open to pretty much everyone in the legal profession. The group is also open to non-attorneys and has allies that are part of the organization.

The association is made up of a board and members who pay yearly dues.

“I think that El Paso has very much been ignoring the LGBTQI community, especially politically,” Lopez said.

Lopez also said the community had failed to see them as an important demographic, which has caused neglect in a lot of ways when it comes to resources and when it comes to police protection.

“It’s because we really don’t have a say politically because we haven’t organized before,” she said.

EPQBA is now working to educate the public informing the LGBTQI community about candidates and to expressing publicly where they stand on issues that are important to them.

“I think it’s important we, the community, force (candidates) to answer the tough questions about supporting gay marriage,” Lopez said. “One of the big things right now is Texas is still trying to not extend benefits to government employees who are in same-sex marriages.”

The organization has hosted citizenship fairs to help pre-screen residents filing for their citizenship. They have also hosted health fairs, where medical organizations test for diabetes and other health issues.

EPQBA also helps the LGBTQI community by providing divorce information and they help transgender people get their gender legally changed.

The association is always looking for volunteers who can help out at the fairs.

EPQBA has grown in the last few months, turning from four or five members into 30.

El Paso has also seen city and state representatives take a stand toward LGBT laws. In fact, State Sen. Jose Rodriguez has been very outspoken on his support for the LGBT community.

Daniel Collins, a UTEP alumnus and a former officer for the Austin LGBT bar association, has worked for Sen. Rodriguez.

The Austin LGBT bar association launched in 2011, which parallels the movement of the El Paso chapter.

“Even in Austin, which I think has a reputation for being more progressive, is still fairly new,” Collins said. “I was finishing law school that year and we started a lot of the lasting programs like a robust mentor program that matches current queer and ally law students to give them mentorship.”

Collins, who identifies as queer, said that in law school he was eager to talk to other gay men who had dealt with issues like whether they should be out on their resume and how to navigate what a lot of people have seen as a generally conservative field.

“This goes to show there are gay law students everywhere and gay lawyers everywhere, and I think all of them increasingly are trying to find community and find efforts where they can talk about issues that are unique to our community,” Collins said.

Collins also said it’s an interesting time to tackle legal issues today such as family law when it comes to the LGBTQI community. He said a lot of firms are waking up to the importance of these issues. He said that Texas can’t take for granted the strides that the LGBT community has made in the last 10 years.

“Not only in law, but I think in just general acceptance in larger culture,” Collins said. “I think it’s easy for people to become kind of complacent when they see there’s a general acceptance of the LGBT community, but we’ll need people to stand up and say no, discrimination isn’t a Texas value and you, my elected officials, should support me and not support policies that keep me from living my fullest, most productive life.”

The EPQBA is currently working to organize a debate for the District 16 congressional candidates in early February at El Paso Community College.

“We do want to be active politically, so I think it would be great to endorse or not endorse candidates,” Lopez said. “I think it’s really important to know our voices are heard. In an organized manner. You can really be a lot more effective with having voices heard.”