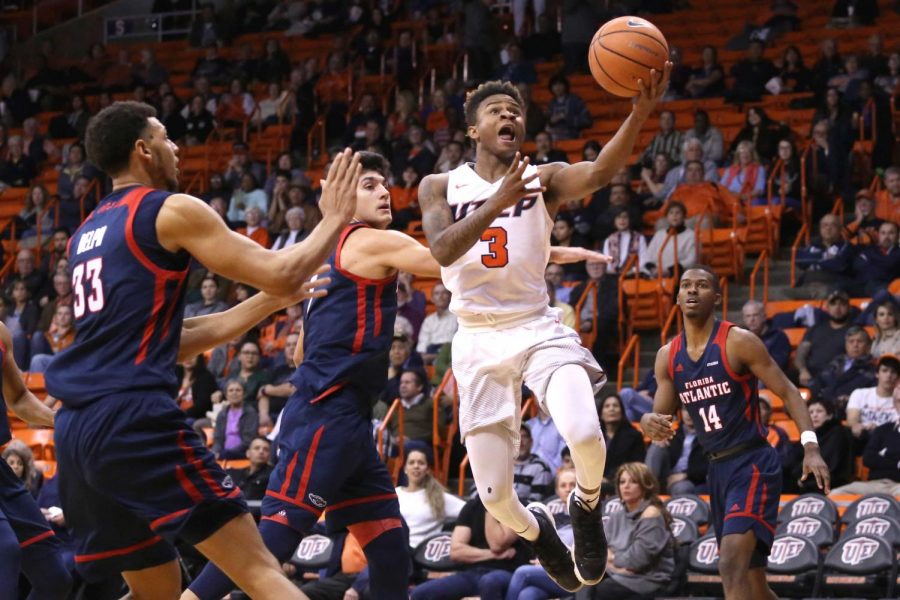 It was a game of firsts for the Florida Atlantic Owls after they ran away with a 73-66 win over the struggling Miners.

And they did it with a huge second half surge, coming back from a four-point deficit at the half, and chipping in 18 points off the bench and out-rebounding the Miners 49-33.

“So disappointed,” said interim head coach Phil Johnson. “If they have 16 extra possessions in one game than you—you can’t overcome that.”

Both teams didn’t start the first half the most effectively or how they wanted. Still, the Miners held onto the longest lead of the half, with a 14-7, 23-17 and a 34-29 lead at the half.

Defensively, the Miners came out strong, holding FAU to shooting just 3-of-11 (29 percent) from the floor early on.

Despite the Miners leading for the majority of the half, FAU continued to chip at the Miners’ lead. They were led by guard Payton Hulsey, who had 12 points for the Owls, and six other players had a bucket or more for FAU. The difference for the Owls was points in the paint in the first half, as they scored 16 of their 29 points from inside.

“We work our butts off,” Johnson said. “We’re not a physical team, more of a finesse team. They (FAU) deserved to win.”

The Miners were led by guard Kobe Magee and center Matt Willms in the first, who chipped in with eight and seven points respectively. They were out-shooting the Owls going into the half 44-32 percent from the floor.

“I thought we had good momentum going into half,” Johnson said. “Knew it was going to be a dog fight.”

But the second half, Florida Atlantic came out fighting.

They came in with a monstrous 20-10 run off the bat and took the lead for the majority of the second half. Guard Justin Massey scored 11 points right off the bat to lift the Owls up, and they held the Miners to shooting just 6-of-16 (38 percent) from the floor. They lead as much as 11, 61-50, late in the second half.

Luckily for the Miners, freshman guard Evan Gilyard was subbed in around the six-mark and hit three 3-pointers that changed the course of the half. He finished the game leading the Miners with 20 points and 14 from the second half.

It wasn’t enough as the Owls closed the game with the victory, 73-66.

“Gotta do a better job all around,” Johnson said. “I’m surprised. Got to rebound better. We talk about it all the time.”

Keith Frazier returns to the court

For the first time since his two-week departure after the team’s 63-62 loss to North Texas on Dec. 28, guard Keith Frazier returned back with the Miners.

Through the majority of the game, however, Frazier was sidelined and did not play on the bench. Just before the Miners went on their 9-0 run in the five-minute mark, they subbed in Frazier, who went 0-for-4 from the floor and 0-for-3 from 3-point range. Needless to say, Frazier looked frustrated and could not find his groove in his eight minutes of play.

“Wasn’t fair to Keith playing him,” Johnson said. “He’s been unbelievable since he’s come back… Didn’t plan on playing him. He didn’t have any expectations to play, but we needed our best shooting team late.”

When asked about the reasoning behind his departure, Johnson alluded it to being a “well-being” concern, but made sure to keep the matter quiet on a personal request.

“Doesn’t matter—his well being is my number one concern,” Johnson said.

Up next, the Miners will take on Florida International on Saturday, Jan. 13. The Panthers will enter Saturday’s game at 8-9 overall and have won just two of their last five. Tipoff between the two will be at 7 p.m. in the Don Haskins Center.