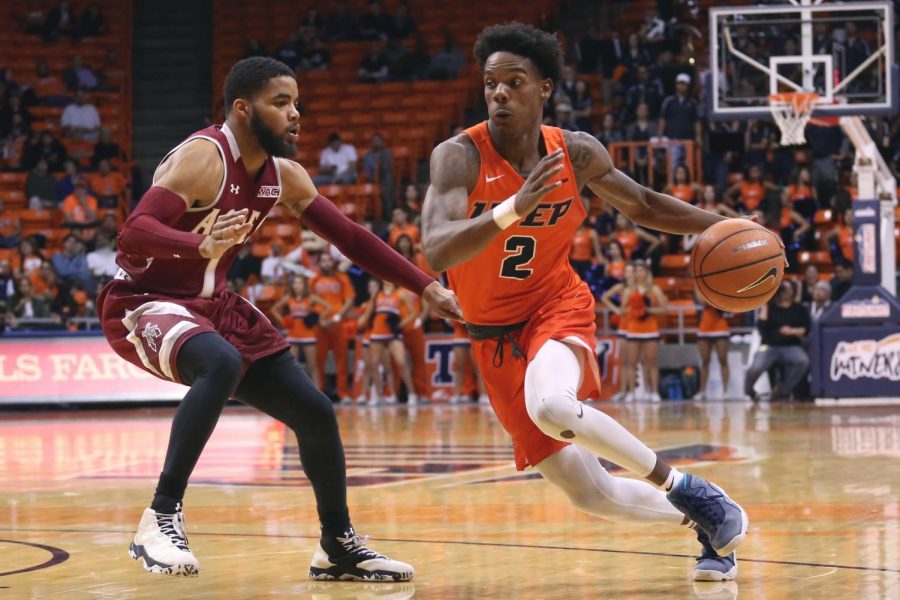 Senior guard Omega Harris is coming off a career-high 28 point performance against New Mexico this past Saturday night.

With rivalry week wrapped up for the men’s basketball team, the squad will look to build on the success they found against rival New Mexico in an 88-76 win that snapped a six-game losing streak this past Saturday night at the Don Haskins Center.

With the win, the Miners earned just their second victory of the season.

UTEP (2-6) will continue their season long eight-game home stretch with a matchup against the Washington State Cougars (6-1) on Saturday, Dec. 9.

Interim head coach Phil Johnson will be looking for back-to-back wins for his club for the first time this season.

The Miners were handed the news this past week of the sudden retirement of head coach Tim Floyd, after a loss to  Lamar on Nov. 27.

UTEP promoted assistant coach Johnson to interim head coach the following day and the Johnson era is off to an intriguing start.

After getting blown out by the Aggies last Thursday, the team regrouped in a total team effort that saw senior guard Omega Harris set a career-high with 28 points, in what was a surprising win against the Lobos.

Following two defeats early in the week, the Miners showed a lack of ball movement. Something that was a problem before Floyd announced his retirement.

In the New Mexico State loss, the Miners were only able to dish out a dismal four assists.

After starting the season on fire with a six-game winning streak, the Cougars dropped their first game of the season this past Saturday night at home. However, the loss was to Big West preseason favorite UC Davis, 81-67.

The matchup with the Miners will be the Cougars’ second game this week as they go on the road and face Idaho on Wednesday, Dec. 6, before facing UTEP.

The Miners’ defense will need to force these two into taking bad shot attempts, as the duo are the only members of the Cougars who have scored over 100 points so far in the season.

Another aspect of the Cougars’ game that makes them so difficult to guard is their team’s ability to share the ball and force turnovers. As of right now, the team has 110 assists on the season.

The Cougars average six steals per game and they will look to utilize that aggressive defense on a Miners’ team that has turned the ball over 104 times this season.

If the Miners were to somehow pull off another upset and use it to retake control of their season, they will need to get it going on the offensive side. Injured senior center Matt Willms is still the Miners’ leading scorer with 14.8 points per game.

Guard Keith Frazier should eclipse Willms while he is sidelined, as Frazier is now averaging 13.3 points per game, a stat that is steadily increasing. Frazier scored 16 points against the Lobos.

However, the ace in the hole for this Miners team is Harris, who is coming off his best game as a Miner. The senior shot nine-for-11 on shot attempts, including a perfect shooting night from behind the arc (4-4) and at the charity stripe (6-6), recording just one turnover.

Johnson has complained about the lack of ball movement the Miners have been showing as of late, going on to say that one guy alone should be getting eight assists a game and not a total of 14 in two games. But against the Lobos, five Miners were in double digits, something they will need as the season progresses.

UTEP is in a midst of an eight-game homestand. They will look for the recipe of success they found against the Lobos as they look to get right before the start of Conference USA play.

Tip-off against the Cougars is slated for 7 p.m. this Saturday.