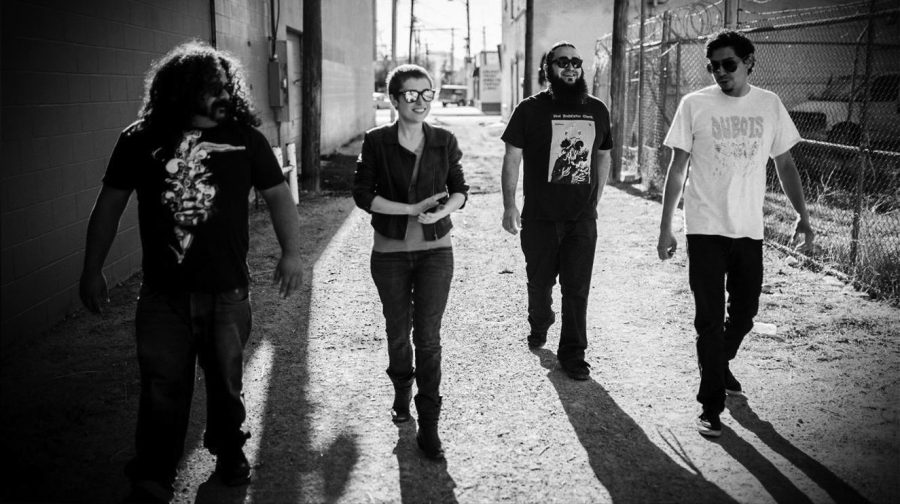 As a seasoned veteran of the El Paso music scene, singer-songwriter Emily Davis is emerging with a new alternative project, spearheading the band Emily Davis and the Murder Police.

The Prospector caught up with Davis regarding this new project, graduating from college in May and how she uses her academic experience in her work as a musician.

Q: Guide me through your musical orientation as a kid. What were the first few steps you took to get to where you are now in your career?

E: I grew up heavily involved in worship at my church, my father was a musician, he was a vocalist and would tour in a youth choir as a child, so that was the initial atmosphere where I was exposed to music. I was also raised to enjoy a lot of southern rock and classic rock like Lynyrd Skynyrd, The Doobie Brothers and the Allman Brothers. There is stuff that isn’t so much southern like singer/songwriters like Cat Stevens and Paul Simon. I was exposed to a lot of that and I think a lot of it still resonates in my music. When I was 15 I discovered punk rock, specifically through the band Bad Religion and that really shaped my interests as well. Around the same age, I started writing songs and playing shows.

Q: You started out as more of a singer/songwriter type of act. How has that evolved to where you are now?

E: About two years ago, I have always wanted to be in a band and I was in Cigarettes After Sex in 2012. I heard an interview with Jim Ward about what it takes to be in a band, why it could be so rewarding, and I had just released my third album and I felt like it was time to really try and find the right people and invest the time and energy into that. After trial and error with different people, we finally found the right setup and we are working on a new album. We are called Emily Davis and the Murder Police. We are gonna open up for Sparta next week–Jorge “George” Torres, Jose Macias, Tomás Tinajero. It has kinda deviated because there has always been the folk aspect in my music, but while that is still occasionally there, I think it is really built an alternative underbelly. It is a little bit faster and a little bit harder, and it is really fun and rewarding to play with them. We are gonna start recording in maybe February-March.

Q: Why the name, Emily Davis and the Murder Police? How did that come about?

E: We joke and we say that it has a better ring than Emily Davis and the homicide detectives. I think that where it came from is a love of John Mulaney and he has a skit about “Law and Order” and he refers to homicide detectives as the murder police and we quote it out a lot, so it kinda became something we all agreed could be our band name.

Q: Did you ever have any troubles adapting from being a solo act to a band? Now you have your three bandmates, so what have been any shortcomings that you have found? Any differences between both recording processes? Any benefits?

E: I often felt very limited in what I could do by myself and I recognized that sometimes songwriting becomes really stale if you are just doing it on your own. Some people are capable of it and I applaud that and I’ve tried to be capable of it over the years, but one of my own shortcomings was what I felt like were my limitations, so I guess the biggest benefit is finding people that not only complement your sound really well, but you can become really good friends with, and the benefits are obviously friendship and the whole different dynamic when it comes to songwriting and sound. You have people that are putting in more ideas so you have a bigger pool when it comes to ideas.

Q: There is a very noticeable difference between being a solo, singer/songwriter act and a band that is influenced by bands such as Bad Religion. How does that interplay?

E: We are influenced by a lot of stuff, my bassist loves metal and we don’t really do metal, but that energy that is involved in metal comes through, our guitarist likes punk rock and shares a love of classic rock and 70s music and so I think we have a little bit of that going for us, and then yeah, Bad Religion has played a huge role in how I want to see the world and how I write lyrics and how I strive to do things musically.

Q: Bad Religion is such a socially conscious band. Is that something you try to incorporate into your lyrics?

E: My first album was 80 percent love songs, and there is nothing wrong with that occasionally–it is something that still inspires me. There are a couple of songs in that first album that have nothing to do with that, they are socially motivated and I never have an agenda to what I wanna write about. All I know is I wanna contribute to something and it doesn’t necessarily have to be the case. I’ve written a lot of dumb songs about a lot of different things, but I do think it is important to discuss what is going on around you and music is a great medium with which you can do that.

E: I kinda postponed college because I did wanna focus on my music for the first few years after graduating high school. I always had a desire to get back to college and get a degree. I wasn’t first sure about what I wanted to do, but it felt important enough for me to try it out, and I figured I would go to school and find something along the way that interested me, and hopefully something that would inspire me to write more music. I found that in anthropology. I liked that it combined a lot of the sociopolitical and artistic aspects of a liberal arts school, but there is also a lot of science in it, especially when you look at physical anthropology–studying human evolution and material culture and archeology. It is kind of a happy medium between those two and it inspired me a lot.

Q: How would you say that has inspired not only your songwriting but your musical compositions as well?

E: I think the beauty of anthropology is that it really forces you to open your eyes and step outside yourself and it forces you to look at other communities, not only inside your own country but outside and it makes you challenge your perspectives as any good major would, but it is especially true in anthropology. So I think having a broader perspective plays a great role in any musical endeavor especially when it comes to lyricism, which I tend to stress in my music.

Q: What would you say has been the turning point in your career?

E: I have had many turning points I think, but I had the chance to open for Greg Graffin, the lead singer of Bad Religion. He recently released a solo album and he contacted me back in March right before spring break and he asked me to open up for him for four different shows so I was able to do that. That was the dream really. If I could do anything in life, that was one of the things I dreamt about doing.

Q: Aside from this upcoming record, do you have any plans for the future after that? Maybe touring?

E: We have toured a lot the last two years. I’ve never released an album with a band and we’ve written a bunch of new songs and we are only playing new songs at the Sparta show, so that is really our focus, getting these songs really tight and get ready to record them. Certainly next summer, shortly thereafter, we can plan touring again because we love that.