A recap of a year under President Trump 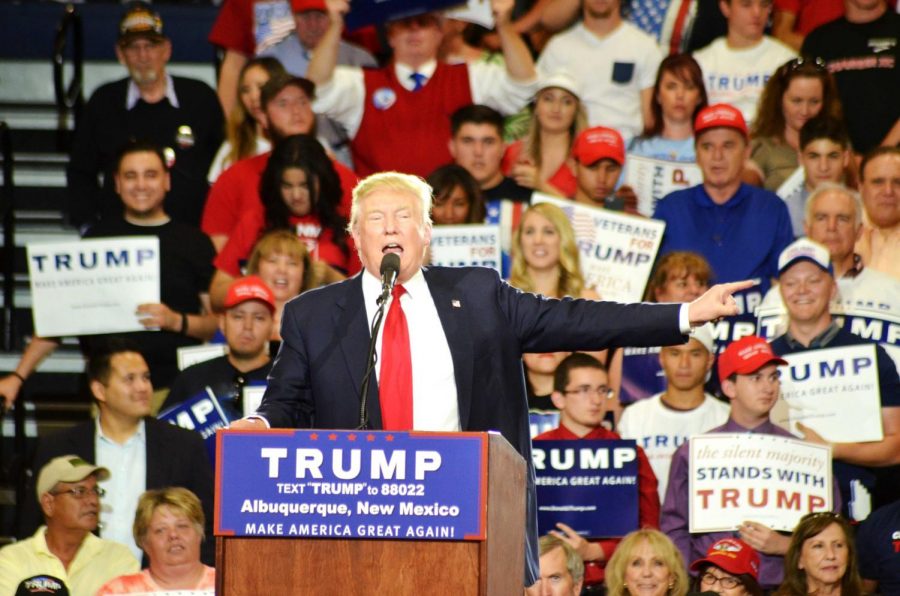 No matter what your political position may be, we can all agree that the Trump presidency is anything but boring. Every day there are new headlines about the administration’s latest outrage, so much so that a lot of the actual policies get buried under tweets or rhetoric—or the ever-growing Russia scandal. Instead of going over outrages or political triumphs, we decided to look at the executive orders and new policies that the Trump administration is creating. This list is not comprehensive and the effects of many policies are still too new to measure, but given that Trump has signed more than 30 executive orders in his first 100 days, there is still a lot to look at.

Late in February, Trump signed an executive order calling for federal agencies to revise the Clean Water Rule that expands the types of bodies of water protected by the government to include streams, ponds and smaller bodies. Former President Barack Obama implemented the rule. Trump is expected to either eliminate or revise Obama’s rule.

Later that year, Trump ordered a review of national monuments. Instructing the Interior Secretary to review any national monument created in 1996 over 100,000 acres. Trump called the Antiquities Act, which gives the president the powers to declare national or historic landmarks, an “abusive practice.” Up to 25 existing national monuments could be impacted.

On July 1, Trump declared that the U.S. will withdraw from the Global Climate Accord, known as the Paris climate accord, which has the support of nearly 200 nations. The U.S. cannot legally withdraw until 2019.

On his first day of presidency, Trump issued an executive order that was aimed at weakening the enforcement of the individual mandate. The mandate requires everyone to purchase health care that was enacted under President Obama to ensure low premium costs. Weakening the mandates caused healthy individuals to opt out of buying health insurance, causing premiums to rise.

Less than a week later, the Trump administration canceled millions of dollars worth of advertising for Obamacare enrollments, cutting enrollment by nearly half a million people by some estimates. In August, Trump cut 90 percent of advertising again.

The next day, Trump announced he would cut cost-sharing reduction payments to insurers that held out-of-pocket costs for low-income people down. The policy change could raise premiums for some while increasing the deficit by $26 billion by 2026, according to the Congressional Budget Office.

Within his first week, President Trump signed two executive orders that dramatically changed immigration policy. The first called for the “immediate construction of a physical wall on the southern border.” Expanding on the Secure Fence Act signed by former President Bush. The order also increases the number of detention facilities and gets rid of the “catch and release” practice, where until an individual goes to immigration court they are not held in detainment facilities.

The second order threatened so-called “sanctuary cities” by withholding federal funding if a city does not comply with detainer requests from Immigration and Customs Enforcement.

Two days later, Trump signed another executive order, known as the “Travel Ban,” which barred admission to the U.S. for immigrant or nonimmigrant people with visas from Iran, Iran, Libya, Somalia, Sudan Syria and Yemen for 90 days. Federal Judges immediately blocked the order, the case went up to the Supreme Court that allowed some aspects of a revised travel ban executive order to go through. Parts of the order are still being contested in court.

Working with Republican Senators in August, the administration started to push a skill-based immigration approach, while cutting the amount of immigrants allowed into the U.S. by half.

Trump announced the end of the Deferred Action for Childhood Arrivals in September, giving Congress until March 5 to find a solution that will impact over 690,000 protected immigrants from deportation.

In early October, Trump sent a letter to Congress listing its immigration “principles,” which includes the border wall, increasing the difficulty for these seeking asylum, restricting family-based legal immigration and implementing the E-Verify employment verification nationally. If the Democrats agree to these principals, Trump has suggested that he would be willing to sign legislation allowing for DACA recipients to stay.

The demands have led many to believe that a “deal” with the Democrats is unlikely.

On Trump’s second day in office, he focused mainly on infrastructure, starting with an executive order that expedited environmental reviews for “high priority” projects, such as pipelines. He also introduced two presidential memorandums that same day calling for the expedited review of new permits for constructing the Keystone XL and Dakota Access oil pipelines.

Trump also signed another memorandum that same day calling for the Commerce Department to review the impact of federal regulations on manufacturing and request feedback from industry stakeholders on how regulations could be removed or simplified.

In late April, Trump signed an executive order reviewing the federal government’s control over national education policy. Calling for states to have more control over curriculum and administration, Trump asked the education secretary to “rescind or revise” any regulation that violates federal “direction, supervision, or control.”

In his first week, Trump removed the United States from the Trans-Pacific Partnership, the 12-nation trade deal negotiated under former President Obama. Trump declared that the U.S. would negotiate individual deals. Critics say they are slow-moving and largely unsuccessful as well as diminish possible economic growth and American influence in Asia.

Trump also instituted a hiring freeze on federal civilian employees throughout the executive branch excluding the military, cutting the federal government by around 9,000 employees in the first six months. The freeze was partially lifted in April, when Trump instituted a memorandum ordering agencies to submit workforce reduction plans that will be implemented in the 2019 budget.

At the end of his first month, Trump introduced his “Two-for-One” executive order that removed two regulations for every new one introduced. Trump cited small business as being hampered because of over regulation as the main reason for the mandate.

Trump also ordered a review of the financial regulations including the Dodd-Frank Act, which was introduced by the Obama administration that placed significant regulations on the financial industry after the recession.

Signing two trade executive orders in late March, Trump asked for officials to develop and implement ways of combatting customs violations. Customs violations cost the government $2.3 billion in revenue over 14 years. Trump also ordered officials to produce an “omnibus” report naming partners that the US has a large trade deficit in goods, which he says will result in “necessary and lawful action.”

On his 100th day in office, Trump also created the Office of Trade and Manufacturing Policy, which is aimed at protecting American manufacture workers. He also ordered a review and possible renegotiation of all U.S. free trade agreements, including the North American Free Trade Agreement (NAFTA) and the World Trade Organization pact.

The president gave an executive order that created a commission combating drug addiction and the opioid epidemic. The commission recommended in July that Trump declare a national emergency, after finding that more than 33,000 people had died of an opioid overdose in 2015. Trump soon declared a public health emergency, which is one level short of the recommendation, giving the administration access to the Public Health Emergency Fund. Critics said that the declaration is not enough and that the emergency fund is nearly empty.

In early May, Trump created a Presidential Advisory Commission on Election Integrity. The panel asked for data from the states on their elections, which many states denied over issues of privacy and states’ voting rights.

One of the first major changes on foreign policy, besides the TPP ruling, is moving away from the long-held two-state policy solution between Palestine and Israel. Trump was reported saying that he could live with alternatives. Recently, there have also been reports that Trump is planning on announcing the recognition of Jerusalem as the capital of Israel, making the possibility of the two-state solution even more distant.

Despite claiming that it was a “bad deal,” the Trump administration extended the Iran Nuke Sanctions while also adding other sanctions to the country as well.

Trump rescinded the U.S./Cuban relations that Obama had worked toward in a presidential memorandum, like discouraging migrants from Cuba and removing talks of broader communication between the two countries.

In August, Trump vowed to introduce a new plan to “win” in Afghanistan.

Trump also imposed sanctions in Venezuela over the continued crackdown on democratic protests and claims of rigging the presidential election by the Nicolas Maduro regime. This is the fourth round of sanctions by the U.S.

During his visit to the United Nations, the president said that the U.N. does not pay its fair share of the costs and continuing his “America First” policy. More alarming for many members, Trump said that he would “totally destroy” North Korea, a member of the U.N. Trump has leaned heavily on his rhetoric against North Korea, leading to tensions between the two countries, which have not been this high in more than a decade. However, despite his rhetoric, Trump has not actually changed any U.S. policy when it comes to North Korea.