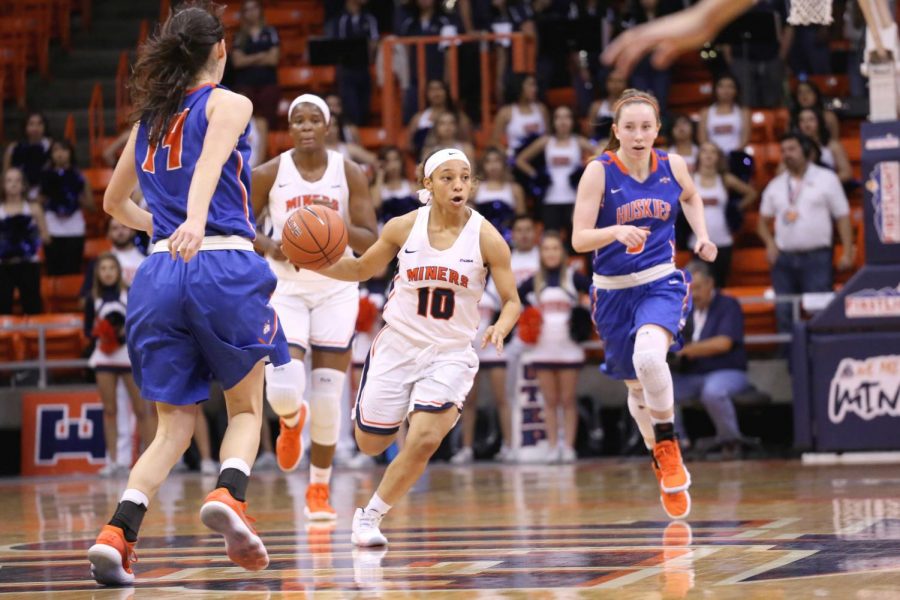 Najala Howell earned a season-high tying 19 points to go along with seven boards and sophomore Roeshonda Patterson came off the bench to match a career-high in points with 11 to join both Seda and Howell in double figures.

UTEP got a huge 9-0 fourth quarter run with three straight triples to give them their biggest lead of eight with 2 minutes remaining in the contest.

However, the Huskies would not go away. HBU used a layup by Johnson and a 3-pointer from Britta Daub to make it a one-possession game (65-62). With the ball back in Miners’ hands, Jordan Alexander was able to knock down a wide-open look from the wing with 21 second remaining to seal the game.

“I wish we would have played a little better in quarters one through four, our energy wasn’t very good in the first half and Houston Baptist really punished us for that,” said UTEP head coach Kevin Baker. “But I’ll certainly take their energy and activity that they played with in the third and fourth.”

The Huskies battled the Miners hard inside, outscoring UTEP 32-18 in the paint, a surprise to a Miner team whose strength has been around the rim so far this season.

Seda earned 10 of her 16 boards and six of her 10 trips to the line in the second half.

“I can’t say enough down the stretch about T’s (Seda) composure,” Baker said. “We threw it inside on the double team and she was able to kick it out opposite of her to Naj (Howell) and Naj hit some big shots.”

The Miners force inside, Seda, said her ability to gain some offensive rebounds in the second half is what turned the game around.

“Rebounding,” Seda said on what changed in the second half. “Every offensive rebound I got, I saw my team get up (off the bench) and that got me hyped and it was just great to see everybody coming back together which led to scoring opportunities.”

UTEP set season highs for 3-pointers made (10), attempted (21) and percentage (47.6), including going 6-8 from distance in the final frame to help complete the comeback.

Howell nailed four 3’s (4-6) in the game, all coming in the fourth quarter.

“Naj just seams to find a way to hit a big shot and make a clutch play,” Baker said. “I love the way that she plays, it’s going to give me gray hair at times but she’s a winner and you want her on the floor in crunch time because she is going to make something good happen.”

Those gray hairs Baker is referring to are the five turnovers from Howell in the game. The Miners as a team continue to struggle with turning the ball over, today UTEP turned the ball over 22 times leading to 21 points off turnovers for Houston Baptist.

UTEP will now hit the road for the first time this season when they take on Arkansas State (3-4) on Tuesday, Dec. 5.

“We love playing at home but with playing out (on the road) we can get a sense of being outside our home court to prepare us for conference and future tournaments,” Seda said.