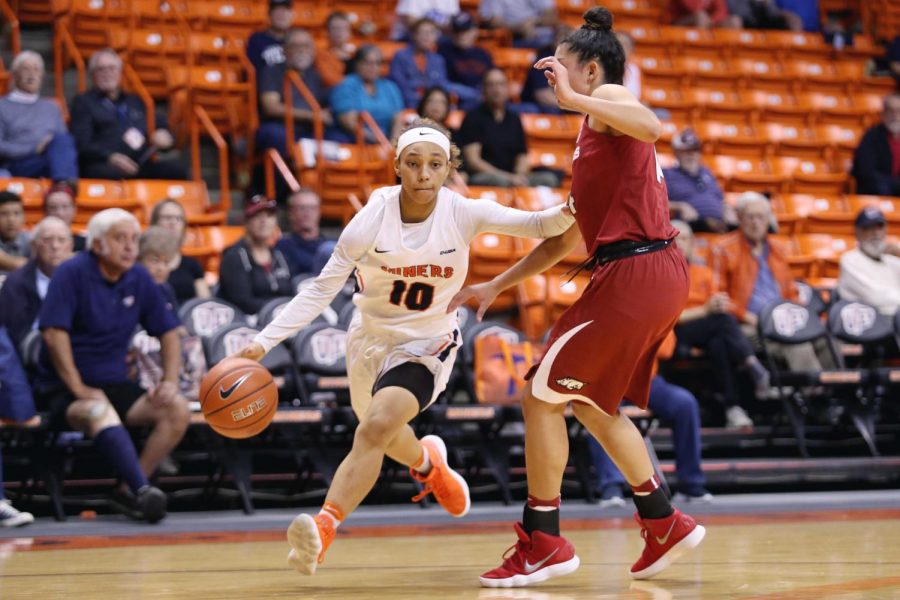 The UTEP women’s basketball team held the visiting Arkansas Razorbacks to 30 percent shooting (21-70) and 26.8 percent from behind the arc (11-41) to win the first game of the UTEP Thanksgiving Classic.

The 64-61 victory for UTEP is the program’s first ever win over an Southeastern conference (SEC) team and first win against a Power Five conference team since defeating Kansas State 84-39 back on Nov. 16, 2013.

“We learned something today, we learned how to win a tough game,” said UTEP head coach Kevin Baker postgame. “I just thought our kids gritted their teeth and decided that we were going to win today. That’s also thanks to our crowd. I thought our crowd was absolutely phenomenal. I’m proud of our fan’s effort today. It was just a great day to be a Miner.”

The Miners (3-0) led 13-2 early and by as many as 20 points at the start of the second half but the Razorbacks (3-2) made 9 of their 11 three pointers in the second half to cut the UTEP lead. Luckily for the Miners, Arkansas missed 30 out of 41 attempts in their three point barrage effort.

UTEP dominated on the glass and inside, outrebounding Arkansas by 24 (51-27) and earning a 38-18 advantage with points in the paint.

“The first three quarters was just good Miner basketball,” Baker said. “I thought we played about as well as we could offensively at times, made some really good decisions. They are a three-point shooting team and we knew that. We wanted them to force it and have they rely on it, limit them to only one way to score.”

Three Miners scored in double-figures with Senior forward Tamara Seda leading the way with 20 points and 10 rebounds, earning her first double-double of the season. Najala Howell tallied 15 points and Katarina Zec added 10 in the win.

Seda came out of the gate to earn 11 of her total 20 points in the game’s first four minutes of play.

“The whole week all the coaches we’re telling me nobody could stop me on the block,” Seda said. “I kind of had a feeling that I had to do that in the beginning just to set them off.”

While the two teams traded baskets through most of the third quarter, UTEP looked to be in good shape by holding a 16-point advantage (52-36) heading to the fourth and fina quarter. The margin remained 15 (59-44) with 5:21 to play in the game before Arkansas went on a 11-0 run over the next three minutes to get within four (59-55) with 2:57 left in regulation.

UTEP made four turnovers in the stretch (23 total), and Arkansas also drilled a trio of triples to fuel the run.

Howell answered the Razorback run with with a long 3-pointer of her own to put the Miners up by seven (62-55) but Arkansas responded by scoring the next six points in the game to get within one.

Sophomore guard Faith Cook came into the game in the final seconds and hit a jumper with eight seconds remaining to seal the victory for the Miners as the Razorbacks missed a three in the closing seconds of play.

The Razorbacks were led by Devin Cosper who scored a game-high 22 points to go along with five boards in the loss.

“We know we got it, there is nothing that can stop us,” Seda said. “We know it’s a big win and it’s setting us up for our conference, everybody’s got to watch out for the Miners.”

The last time the two programs met in 2010, it was the Miners who lost (59-56) from being unable to hit the tying three in the final seconds.

If there is one thing Baker and the Miners should be concerned about going forward is the amount of turnovers. The 23 UTEP turnovers in the game led to 22 Arkansas points while the Miners themselves had zero points off just four Razorback turnovers.

“We are turning over the ball at too high of a clip,” Baker said. “We will get better and we will improve and i’m excited to be involved in that.”

UTEP will wrap up play at the UTEP Thanksgiving Classic tomorrow, squaring off against Texas Southern at the Don Haskins Center.

The Tigers (1-3) defeated New Mexico State (2-3) 66-50 in their first matchup of the Classic before the Miners tipped off play earlier this afternoon, going on a 32-4 run in the fourth quarter to steal the win against the Aggies.