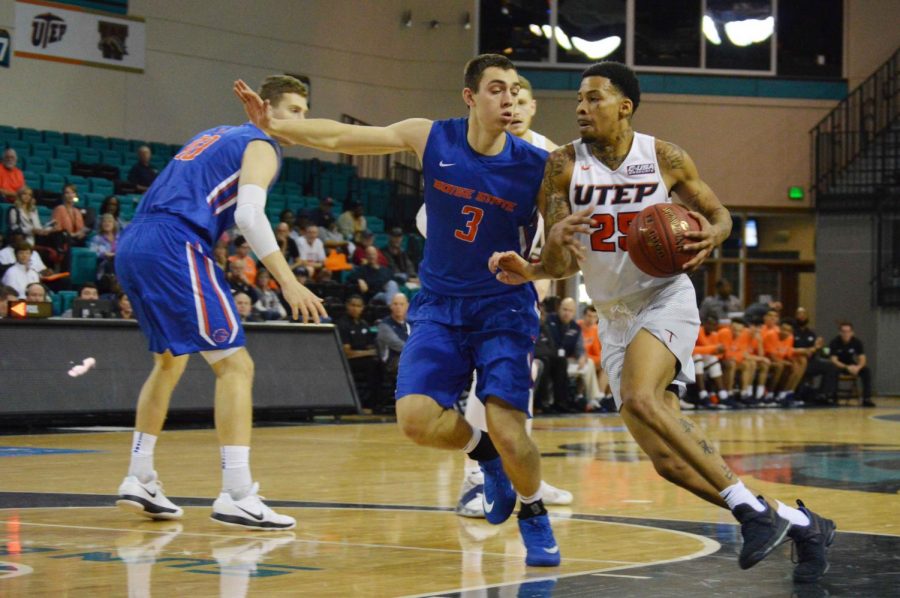 The UTEP men’s basketball team began the Puerto Rico Tip-Off at Myrtle Beach with an exciting match up against the Boise State Broncos of the Mountain West Conference. When the dust – or sand, if you will – settled on the opening round game, UTEP came up two points short, losing by a final of 58-56.

Despite the loss, head coach Tim Floyd was proud of his team’s defense.

“We’re proud of our defensive effort, I thought it was just special in the second half,” said Floyd. “We got down a considerable amount in the first half and guarded hard, guarded well and guarded for long periods of possessions.”

Neither team shot very well in the first half, with UTEP going 7-26 for a total of 22 points. Boise State shot slightly better at 38.7 percent, the key to their nine-point lead being the team’s five three pointers.

At the half, the Broncos were led by senior guard Marcus Dickinson with nine points, all from behind the arc.

The Miners saw guard Keith Frazier, despite two very early fouls, come back off the bench and lead the team with nine points before the halftime buzzer.

Following the intermission, Frazier came out even more hot and quickly tied the game at 40-40. At the end of a 9-0 UTEP run at the 11:05 mark, Frazier hit his second three to tie the game for the first time. Thirty seconds later, Frazier’s third three made the game 46-41 and a UTEP 14-1 run looked like the Miners were destined to take their record to 2-0 to start the season.

The UTEP defense that Floyd often prides himself on reduced the Boise State shooting percentage to a paltry 31 percent in the second half, which also aided the comeback. A big part of the Miner defense was center Matt Willms who ended the game with five blocks and two steals.

“We weren’t really attacking (in the second half). We were being hesitant,” said Dickinson about the poor Boise State second half. “They had a big man in the lane, nobody really wanted to drive because everybody was scared to get in foul trouble, so we were just shooting a lot of threes.”

But, all of that hard work would go for naught with only thirty seconds to go.

That’s when there came an inbound play on the sideline right in front of Floyd.

Twice to inbound the ball – timeout.

The ball was finally inbounded to freshman guard Evan Gilyard in the face of tremendous pressure from the Broncos. Ten seconds later, Gilyard was fouled and the ball was back in Thomas’ hands to be inbounded from the same spot.
Another foul followed before the ball could be inbounded.

Then the ball was inbounded for the final time, this time to Gilyard who was only feet from Thomas – with his foot on the sideline. The ball was turned over to the Broncos.

“We didn’t handle the game situations well late,” said Floyd following the game. “I’ll take responsibility for us not getting the ball inbounded safely, that’s something we should be able to do.”

A lapse in defense then allowed Broncos senior guard Chandler Hutchison to drive the length of the court with only seconds left and dunk the ball home to give Boise State a 56-55 lead.

At the other end of the court, Frazier was at the line with a chance to push the game to two or three points and missed the first shot of the one-and-one. Floyd chose to focus on Frazier’s entire season to come, rather than the missed free throw, following the game.

“I thought he did well. He’s only going to get better and better,” said Floyd, clearly saddened for his star player who was seen pacing the hallway outside the locker room following the game.

The graduate transfer finished with a total of 22 points along with 10 boards to lead the Miners and earn a double-double.

In the waning seconds, Hutchison drove the length of the court for a layup and this time was fouled in the process.
Despite a valiant last-minute shot by Frazier, the 58-56 final went into the record books and the Miners moved on to the losers bracket to face surprising loser South Carolina – a Final Four team from last season – who earlier lost to Illinois State by a final score of 69-65.

The two teams will face off in what amounts to a home game for the Gamecocks at 8:30 a.m. MT.