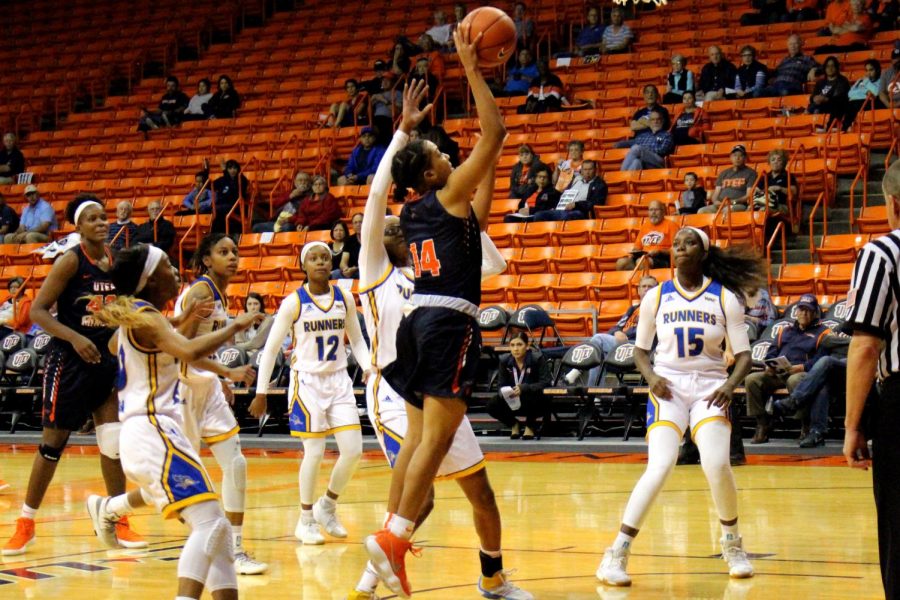 Senior forward Tamara Seda came up two rebounds short of a double-double with eight to go along with a career-high of 20 points to help lift the UTEP women’s basketball team to a season opening victory over CSU Bakersfield, 67-56.

The win gave first-year head coach Kevin Baker his first career victory at the helm of the Miners in his first attempt.

“Good win for the Miners, I was proud to coach today,” Baker said postgame.

It was also a career-high in points for both Alexander and Cook to go along with their lone senior, Seda.

“Today’s win feels amazing, we did a lot of things together offensively and defensively which is a huge help for our chemistry,” Seda said. “We are now starting to realize where everybody can score and make plays.”

The Miners as a team earned 17 total assists and won the battle of the boards, 36-30 all in part of a 16-2 rebounding advantage in the fourth quarter where the Miners also outscored the Roadrunners, 30-11.

“I thought our kids played really intelligent basketball in the fourth quarter, the rebounding factor was the biggest thing because all we kept preaching to them was ‘we got to rebound better’” Baker said. “I can’t say enough about how proud I am of our kids to put in on when the momentum was going completely the other direction.”

That momentum the Roadrunners took came in the second quarter after UTEP held CSU Bakersfield to zero points in the game’s first six minutes of play and led 12-5 at the conclusion of the first quarter.

It appeared as if UTEP was going to cruise through the game as the Miners started strong, jumping out to 12-2 lead over the first nine minutes of the game, including back-to-back triples by Cook and Howell.

CSU Bakersfield was able to cut the Miners lead to single digits heading to the second quarter from a high arching three by Aja Williams to beat the buzzer.

The Roadrunners slowly trimmed the Miners lead in the second before taking their first lead with 1:25 left until the half, off an Alexxus Gilbert jumper. CSU Bakersfield would lead 27-26 at the half.

In the third, the Roadrunners opened up their largest lead of eight at the 3:51 mark and would lead by eight at the end of the third period.

A 13-1 run sparked by a Seda jumper with 9:47 in the fourth ignited the comeback. Cook scored eight in the final quarter including five straight after Seda’s opening bucket in the quarter and Alexander tacked on a team-high 11 points in the fourth.

The Roadrunners trimmed the margin to one (51-50) with 4:30 left in the contest before the Miners capped off a 9-0 run over the next three minutes to seal the win.

“At the end of the day it all came down to what we could do as a team, it starts in practice” Alexander said.

Jazmine Johnson led CSU Bakersfield with 15 points to pace a trio of Roadrunners in double figures for scoring.

UTEP will seek a 2-0 start on the season when they battle against Texas A&M-Corpus Christi on Nov. 18 at 7 p.m. in the Don Haskins Center.