Walkout for DACA calls for new legislation for Dreamers 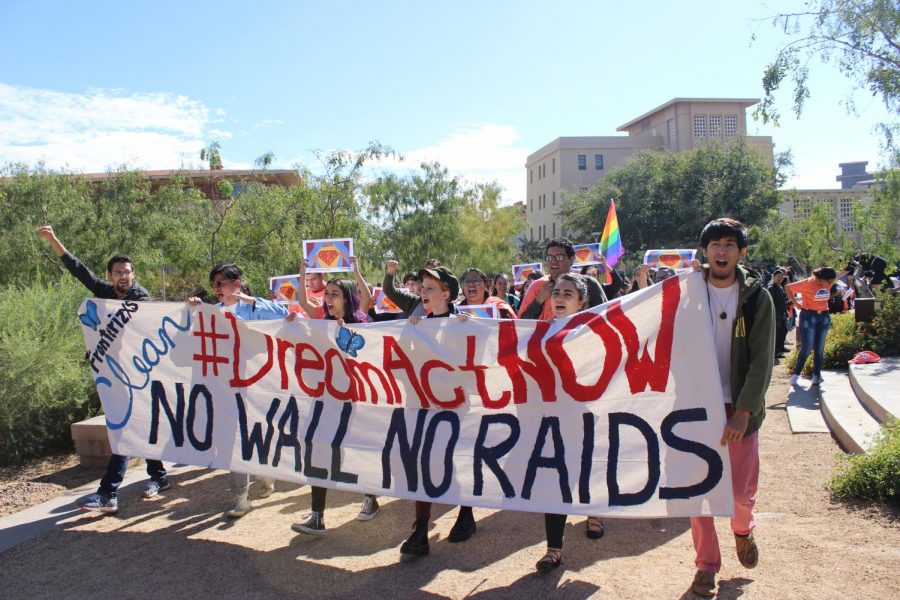 After students and supporters gathered, they marched around Centennial Plaza.

Nearly 100 UTEP students, faculty and staff gathered at Centennial Plaza to raise awareness for the need of a clean DREAM Act and to support the Dreamers.

Soñando Juntos, a UTEP-based immigrants rights advocacy group, organized the walkout at UTEP. The national event that was set up by United We Dream, a student-lead immigration advocacy group, and was said to have over 1,000 people protest throughout the day.

“Basically we’ve lost a few fights this year, but we won some and we continue to fight,” said Paola Rodriguez, a speaker at the event and a senior business major. “No matter who you are, you always can dream for more.”

The protest comes after the revocation of DACA, a program that protected undocumented people who arrived to the U.S. before they were 16 years old. President Donald Trump signed this revocation on Sept. 5, which would revoke some of the 800,000 DACA recipients as early as March 6, 2018.

Soñando Juntos encouraged those who feel strongly against this revocation to call representative Will Hurd.

The Prospector asked UTEP officials for a comment. Gary Edens, vice president for Student Affairs, responded in an email.

“We understand that the uncertainty of this national issue causes enormous stress and apprehension for our DACA students. We stand behind them and offer support services to assist them as they continue to pursue their educational goals. We have established the website http://sa.utep.edu/dean/daca/ to serve as a source of information for the UTEP community, particularly our DACA students. The website also provides on- and off-campus resources that individuals can utilize, including counseling and support services. Furthermore, we have established a DACA Response Team in order to address concerns or issues that may arise with our students,” Edens wrote.