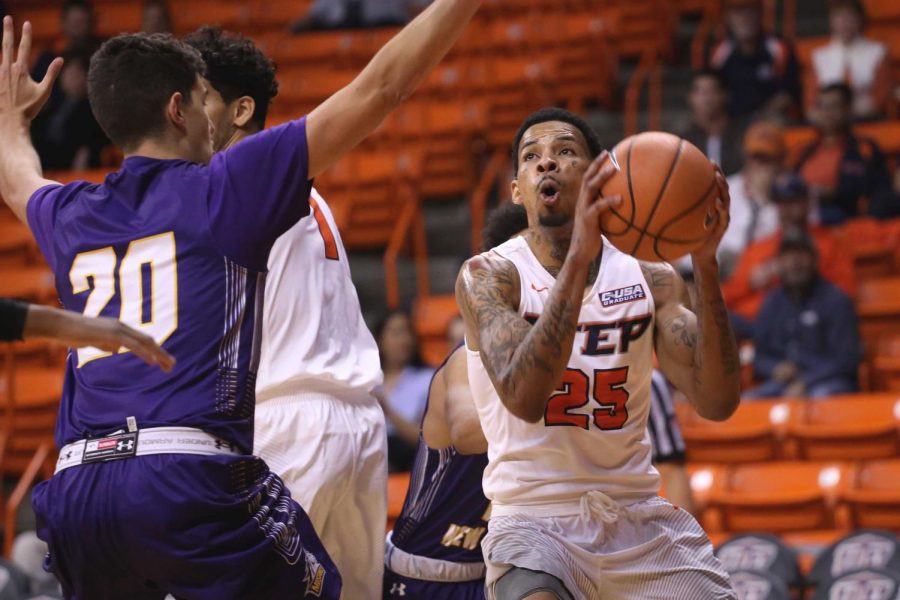 The Miners face Louisiana College in their 2017-18 season opener this Friday night.

The UTEP men’s basketball team will look to put last season’s start in the rear view mirror and start the upcoming season stronger with their first shot coming against Louisiana College this Friday night at the Don Haskins Center.

UTEP opened up the 2016-17 campaign with a 2-13 record before finishing up with a 13-4 tear that saw the team come up one game short of the Conference-USA tournament championship game.

Although the team was able to turn it around, the poor start hurt any chances of the Miners making it to a postseason tournament.

The Miners’ season came to an end earlier this year against eventual two-time champion Middle Tennessee, 82-56, on March 10 in Birmingham, Alabama. The season took a positive turn at the start of conference play, which helped the Miners tie for third place in C-USA and secure the No. 4 seed in the C-USA tournament.

The turnaround was even more surprising, considering the Miners losses to the likes of Southeastern Louisiana, Northern Arizona and Maryland-Eastern Shore in the months of November and December.

Although falling to Middle Tennessee in the C-USA tournament, the Miners upset the Blue Raiders 57-54 on Feb. 4 at the Don Haskins Center for their biggest win of the season. UTEP used a 41-27 second half surge to snap Middle Tennessee’s 10-game winning streak (at the time). The loss would eventually be the Blue Raiders’ only blemish in conference play all season.

Head coach Tim Floyd is entering his eighth season at the helm of the UTEP men’s basketball program. It has been quite the journey for the 63 year old, who started his coaching career in El Paso as an assistant under legendary head coach Don Haskins from 1977-86.

Despite the 62.5 winning percentage, Floyd has faced scrutiny during his seven-year tenure with the Miners. Since Floyd took over, 31 players have left the program due to going pro, transferring schools, facing gambling issues and/or other personal reasons.

The men’s basketball program has not made the tournament since the final season of the Tony Barbee era (2009-10), which was also the last time the Miners were ranked in the polls with a final record of 26-7 overall and 15-1 C-USA mark. Barbee departed for Auburn after the season and Floyd was then hired later that summer.

Harris was named to the preseason team for his efforts as a junior last season, which include a team-leading 17 points per game and 29 double-figure finishes. Willms averaged 11.4 points and 5.5 rebounds per game last season as a junior, with an average shooting percentage of 59.1 percent, a Conference USA best in 2016-17. Flaggert led Conference USA in charges drawn for the second-straight year with 33, giving him a total of 57 in his career.

Graduate student transfer Keith Frazier will be a big boost for the Miners this year, thanks to the experience he brings in. The guard was announced to the Miners roster back on Sept. 12, after spending the previous four seasons at SMU and North Texas.

Youth will be a big part of this UTEP team to go along with their four veterans.

Balancing experience and talent will be the Miners’ driving force to success in 2017-18.

The recent loss of freshman forward Joey St. Pierre and sophomore center Kelvin Jones will hurt the Miners’ depth in the post and near the rim. Kelvin was a big part of the Miners last season, playing a significant number of minutes and was the expected backup to the 7-foot-1 center Willms.

The 2017-18 campaign for UTEP will be their 97th in program history. It will be highlighted early with the Puerto Rico Tip-Off, which was moved to the campus of Coastal Carolina University in Conway, SC, after the impact of Hurricane Maria on the Puerto Rico region in late September.

UTEP will face-off first against Boise State on Nov. 16, with two more games following on Nov. 17 and Nov. 19.

The Miners will meet Battle of I-10 rival New Mexico State twice in six days. Game one will take place on Nov. 25 at the Pan American Center in Las Cruces with game two tipping on Nov. 30 at the Don Haskins Center. The Aggies have won five-straight in the series dating back to the 2014-15 campaign.

The team will play back-to-back rivalry games in the Haskins Center against NM State (Nov. 30) and New Mexico (Dec. 2), prior to completing a four-game series with the Washington State Cougars out of the Pac-12 Conference on Dec. 9.

New Mexico will be making its first appearance in the Don Haskins Center since January 2, 2008. Last season the Lobos survived a furious UTEP comeback after leading 27-6 early in the first half. The Miners nailed 15 3-pointers in the 78-77 loss at The Pit in Albuquerque.

After a 10-day break for finals, UTEP will host Incarnate Word (Dec. 19) prior to battling Howard (Dec. 21) in the first round of the 56th-annual WestStar Bank Don Haskins Sun Bowl Invitational.

The Miners will be home for the entire month of December for the first time since 2012, and only the second time since 2005.

Season No. 13 in Conference USA

The 18-game Conference USA schedule tips off at home versus North Texas on Dec. 28, the earliest date of a league opener since 2001. It marks only the second time in the modern era (since 1965) that the Miners will launch conference play prior to the new year.

The Miners will face all three C-USA Texas schools – North Texas, Rice and UTSA – twice each for only the second time in four years. The Miners will also play LA Tech and Southern Miss twice. Single games are scheduled versus Charlotte (away), FIU (home), Florida Atlantic (home), Marshall (home), Middle Tennessee (away), Old Dominion (away), UAB (away) and WKU (home).

The Miners will start and end their league slate against North Texas and Rice.

The Mean Green and the Owls will serve as UTEP’s first two league opponents for the third time in four years.

The Conference USA Championship is slated for March 7-10 at The Star in Frisco, Texas.

Division III team, Louisiana College is first up for the Miners this Saturday. UTEP opened up last season against the Wildcats with an 88-54 victory for one of just two wins in their first 15. Harris scored 24 points with four 3-pointers in the win.

“I think every coach this time of the year will tell you ‘no we’re not ready,’ but I feel a whole lot better about it (starting the season) this week than last week,” said Floyd after his team’s exhibition win against Western New Mexico. “We are going to keep working and striving to improve our offense and we expect them (Louisiana College) to play well.”

The Miners won both of their preseason exhibition games, but outscored Western New Mexico this past Friday by 48 points as opposed to the close 78-70 win against Sul Ross State a week prior on Oct. 28.

Louisiana College will be led by their lone Senior Torrian Lee, a guard transfer from Itawamba Community College (Fulton, MS) and a Junior guard transfer Lejawon LeBlanc from McNeese State.

Head coach for Louisiana College, Reni Mason, played for Floyd at New Orleans from 1992-1994 while assistant coach Johnathan Brooks was on Floyd’s UTEP staff from 2002-15 as a manager.

Tip-off against the Wildcats is set for 7 p.m.