Hearing for Down syndrome research has positive results 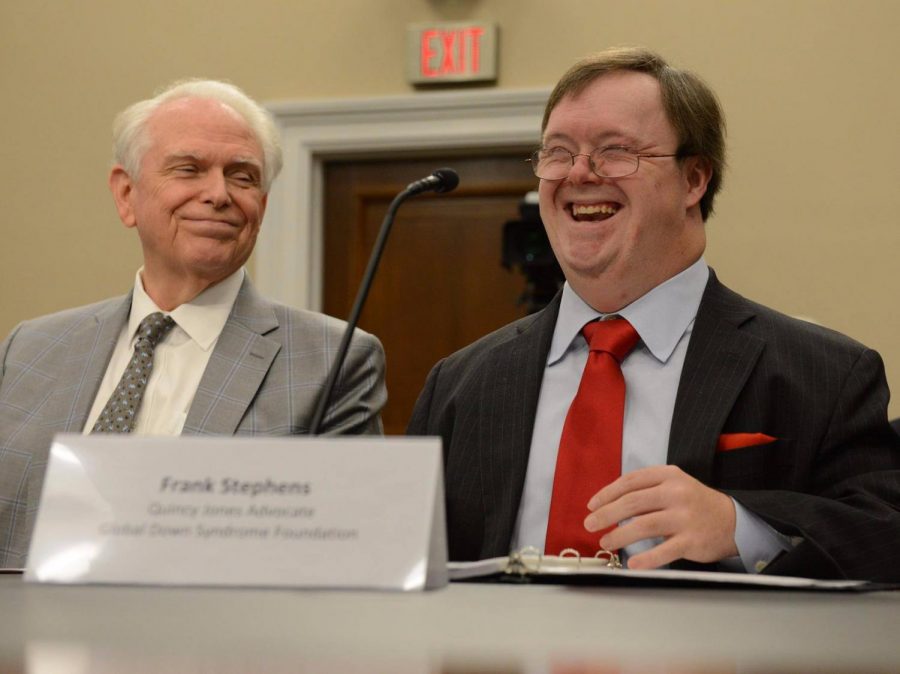 Sitting before Congress in late October, Frank Stephens, a prominent actor and activist for individuals with Down syndrome, advocated for increased research funding in the first-ever congressional hearing on Down syndrome research.

“I am a man with Down syndrome and my life is worth living,” Stephens said at the hearing.

The hearing, “Down Syndrome: Updated on the State of the Science and Potential Discoveries Across Other Major Diseases,” was aimed at looking at current research in Down syndrome and the potential treatment of other diseases such as cancer, Alzheimer’s and immune system disorders.

Stephens’ testimony was also aimed at those who say that research into Down syndrome is unnecessary because of prenatal screens, which detect the disorder and allows the parents to abort if they choose.

A report by CBS News found that in Iceland nearly 100 percent of women who took the screening and tested positive for Down syndrome chose to abort their pregnancy. The report sparked a debate about the ethics of aborting and was peddled by many anti-abortion activists as a form of eugenics.

“Let’s be clear, I completely understand that the people pushing that particular ‘final solution’ are saying that people like me should not exist. They are saying that we have too little value to exist. That view is deeply prejudiced by an outdated idea of life with Down syndrome,” Stephens said.

Kerry McKee, the executive director of Every Little Blessing Preschool, which is a preschool for children with Down Syndrome and children of similar needs, helps individuals participate as they enter elementary schools. The preschool is also a part of the Down Syndrome Coalition alongside the El Paso Community Foundation.

McKee supports the idea of funding further research, but said that one area of research is not something that sits well with her as a parent of a child who has Down syndrome.

“The only research that I’m opposed to is the research that is intended to eliminate individuals with Down syndrome, if it’s research to identify Down syndrome earlier so that people have a better opportunity to terminate, I have a hard time with that.  Not because I’m judgmental about termination, but because I think making a judgment call on what makes a quality of life is tough, I think it’s a slippery slope,” McKee said.

On Wednesday, Nov. 1, the Ohio House of Representatives passed HB 214, a bill that would outlaw an abortion if the reason for the abortion was because the prenatal screening tested positive for Down syndrome. The bill still has to go through the state senate.

Stephens called people who have Down syndrome a “canary in the eugenics coalmine.”

“I try very hard not to judge but the reality is, who are you or I to judge what is a quality of life? Would this same person decide that they want a boy and not a girl, so at what point do we get to say what makes our perfect child?” McKee said.

Testimonies in the hearing also highlighted the disparity in funding for Down syndrome research compared to other developmental disorders.

“Despite being the leading cause of developmental delay in the U.S. and the world, Down syndrome is one of the least funded genetic conditions by the NIH,” said Michelle Sie Whitten, president of the Global Down Syndrome Foundation, during her testimony.

In 2016, out of the $32 billion budget the National Institutes of Health receives, only $28 million was allocated to research Down syndrome. Compared to autism research at $243 million and $97 million in research for multiple sclerosis.

The actual statistics on the number of individuals with Down syndrome in El Paso is hard to come by, according to McKee.

“I can tell you that El Paso County has the highest birth rate for Down syndrome in the state of Texas,” McKee said, and continued to say that there is speculation, but no solid reasons for the high birth rate.

Today, there is an estimated 300,000 people who have Down syndrome and 6,000 are born with the condition each year. With the expected lifespan rising from 28 years to 60 years since the 1980s, the population is expected to grow significantly.

“When my daughter was a baby and I started reading a little bit about Down syndrome…one of the things that I read was that there’s a shortened life expectancy, and that was very difficult as a parent to process, because as parents you’re not supposed to imagine outliving your child,” McKee said.

“These conditions tended to mean that they didn’t have the opportunity to live as long. We are now treating those conditions, so they are living longer. So with that comes the other end of the spectrum where we are starting to deal with the health issues at the advanced ages,” McKee said.

People with Down syndrome also have a high likelihood of developing Alzheimer’s. By 60 years old, almost 90 percent will have the disease, and they also are 500 times more likely to have a form of leukemia. Yet, it is rare for someone with Down syndrome to suffer from solid tumor cancers, such as breast or prostrate cancer, or have heart attacks.

“We are planning not just to support our daughter for our life but for her life. Would that mean living with us, would that mean a home somewhere, what would her level of independence be? You never know with any child, but with kids with special needs there is another level to that question,” McKee said.

According to Whitten, half the U.S. population will die because of one of these diseases, which, advocates say, is why the genetic makeup of people with Down syndrome is such an interesting and potentially helpful field of research.

“Individuals with Down syndrome, if you look at their brains after they pass away, they all pretty much have the same lesions on the brain of someone with Alzheimer’s,” McKee said.

By researching the genetic makeup of individuals with Down syndrome, scientists have discovered a copy of a gene that leads to Alzheimer’s in those with Down’s, and treatment is currently being tested. William Mobley, executive director of UC San Diego’s Down Syndrome Center for Research and Treatment, believes that clinical trials are in the near future.