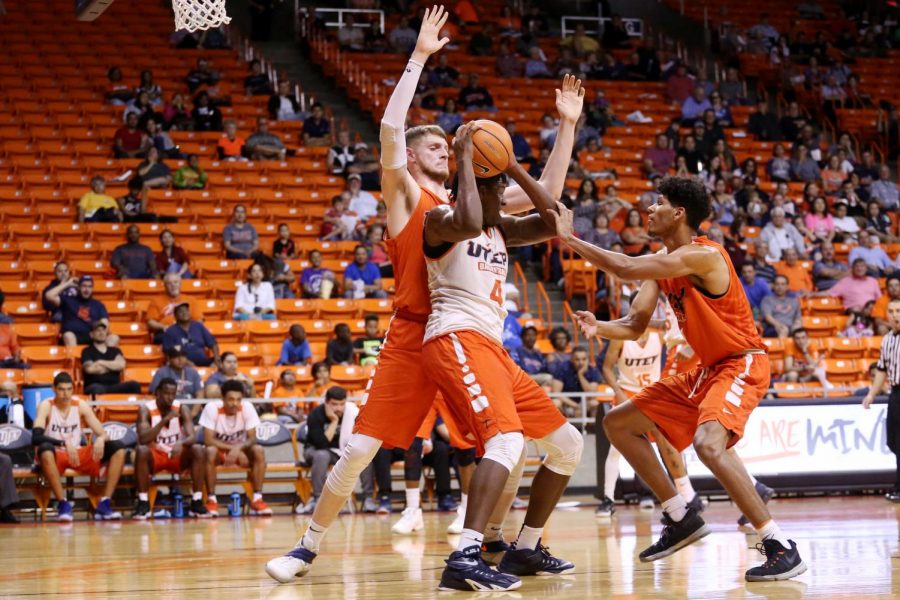 The UTEP men’s basketball team will take the court against another opponent for the first time this season against Sul Ross State on Oct. 28..

In preparation for the 2017-18 men’s basketball season, UTEP will be hosting two exhibition games at the Don Haskins Center.

The Miners will welcome Sul Ross State University on Oct. 28 at 1 p.m., and then on Nov. 3 at 7 p.m., UTEP will battle Western New Mexico.

This year’s team has had the luxury of playing a lot of extra basketball before the start of the season.

First, to get things started, UTEP hosted a Newcomers versus Veterans scrimmage. The veterans edged out the newcomers 80-70.

Then, for the first time in 12 years, UTEP took a trip out of the country to Costa Rica, where they went 1-2 in the three games.

This past weekend, on Oct. 21, the Miners hosted their seventh-annual Orange versus White scrimmage. The game looked like it was on the brink of a blowout, with the Orange team opening up a 15-4 lead early in the game. Team White responded by tying it up at halftime and led the majority of the second half until senior Jake Flaggert buried his only shot of the game—the biggest shot of the night—a 3-pointer that eventually won team Orange the scrimmage, 86-85.

Last season, the Miners got off to a rough start, opening up the year 2-13 with losses to inferior competition, such as Southeastern Louisiana, Northern Arizona, Maryland Eastern Shore and more. So if last season was any indication, a slow start to the year is not what the Miners want to go through again.

However, the Miners looked improved from beyond the arc with some of the newcomers to the team. Freshman Trey Wade nailed a game-high six 3-pointers in the Orange versus White scrimmage, and transfers Isiah Osborne and Keith Frazier dropped in three of their own 3-pointers as well. In total, the Miners made 18 3-pointers during the scrimmage.

Speaking of Artis, the two freshman point guards, Kobe Magge and Evan Gilyard, are battling to replace the void Artis left. The two will heighten their competition when SRSU comes to town.

It won’t be easy for the Miners to rebound after losing Kelvin Jones and Joey St. Pierre during the offseason.

St. Pierre announced he was leaving the men’s basketball program on Oct. 7 for personal reasons, and the announcement of Jones’ departure came after the Orange and White scrimmage on Oct. 21, when the sophomore center was nowhere to be seen on the court.

“Jones told me that his father no longer wanted him to play basketball at UTEP. Kelvin’s dad thought he should have played more, should have had more touches, and this and that. It was much of what you hear in high school parents,” head coach Tim Floyd said. “Kelvin is going back home, which in the last three months has become Minnesota, where he’ll figure out what to do.”

The departure of players is nothing new for Miner fans, and the rest of the team will have to move on and focus their attention on the upcoming games.

WNMU will be coming in after a dismal season, where they finished 2-24 last year. The only two games the Mustangs won were at home, while they went winless on the road.

WNMU struggled on the defensive end, as they gave up 83 points per game to their opponents. Offensively they couldn’t keep up, as they only averaged 64.8 points per game (-18.2 scoring margin).

The Mustangs do return three of their top players from last year as well, with Jordan Enrique, Willie McCray and Latrell Spivey. So the one thing they will have on the Miners is chemistry and experience since UTEP has eight newcomers on the roster and only five returners.

The regular season is set to begin on Nov. 10, where the Miners will open at home against Louisiana College. Last year, UTEP took out LCU 88-54 to open the 2016-17 campaign.