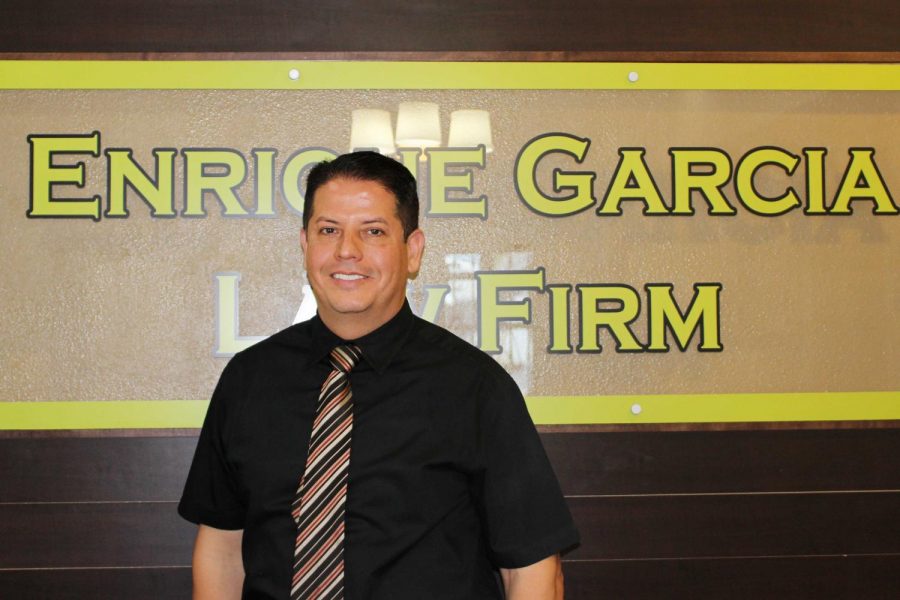 Immigration attorney and El Paso native Enrique Garcia announced his bid for Texas’ 16th United States Congressional District earlier in the summer. Garcia joins a crowded Democratic Party slate, as he is one of five candidates to run as a Democrat.

Garcia, the son of a seamstress for Levi Strauss and a taxi driver, decided he wanted to go beyond his parents’ professions at an early age.

“Early on, I kinda knew that I needed to do something. I had to better myself and I had to basically take a step further than my parents did,” he said.

His summers were spent in Ciudad Juárez with his grandmother, where he learned to perfect what he referred to as “street Spanish.” While the binational relationship between the United States and Mexico was different during his childhood, Garcia’s personal exposure to the border and the relationship between both countries is something that would later resonate with him once he became an immigration attorney.

“You didn’t really think about it, and in fact it didn’t dawn on me until I became an attorney that I said ‘okay, this is really an issue that affects our community,’” he said.

After graduating from UTEP with a bachelor’s degree in finance and marketing, and a graduate degree in computer information systems, Garcia decided to attend Capital Law School in Columbus, Ohio, a place where his perception of national ethnic tensions shapeshifted.

“My brother had just gotten out of the Marines and we were out there trying to rent an apartment. We waited for about 30 minutes for somebody to come help us and we had some lady come up to me and say ‘we don’t need our lawn cut today’ and she was very upset,” he said. “I said ‘okay I’m not here to cut your lawn, I’m here to rent an apartment.’ At that point, she was shocked that first of all I spoke English, and then I told her I am going to law school so I needed a play to stay.”

Garcia also experienced a Ku Klux Klan rally outside the state capitol in Ohio, which opened his eyes to the racial division faced in places outside of El Paso.

“We drove right by it and I just couldn’t believe my eyes. It was a KKK rally with people in their full garb. I realized then that I understood why we were treated so differently in Ohio,” he said. “So we weren’t either black or white, we were the gardeners of this city. I really just wanted to finish my education and get back here as soon as I could.”

Once he came back to El Paso, he struggled to find work as an attorney and bounced around jobs in the financial and tech sectors. He even went on to work as a plant comptroller at a Phillips maquiladora plant, where he learned to speak a more “professional Spanish,” and started to develop the idea of delving into immigration law.

“I first started with the business immigration side of it and then got into the family and the litigation side, and then that’s how I started seeing how immigration affects everything that we do in this community,” he said.

His cases and prior experience were a couple of factors that led to his decision to run for the spot soon to be vacated by Congressman Beto O’Rourke, as he takes on Ted Cruz for the Texas Senatorial spot. His perception of local government made him also decide to run for a position at the federal level.

“I would keep looking at how city council, the little meaningless things that they would do, like ‘I don’t wanna sit next to this person because they’re doing this,’ and it was just petty things in the way they city was running,” Garcia said. “What I’m doing now is more federal, so I said this is the opportunity because it is an open seat–basically it is for everybody.”

Despite running against opponents with established political careers, Garcia believes that his experience with law interpretation and understanding is one of his strengths for the 2018 race.

“You got to most importantly understand the consequences that these laws will have on the country as well as your community, so I have been doing that for over 10 years,” he said in reference to his career as an immigration attorney. “If you are looking for management, if you are looking for IT or accounting, I’ve done that. I’ve managed it as well, but this for me was the best opportunity because my ideas and my plans that I want to implement are on a federal level.”

In terms of the policies that he would like to see implemented at a federal level, Garcia believes an affordable higher education is a priority. He pointed at student debt and the lack of jobs in tech and engineering fields as setbacks for local growth.

“I understand once you graduate from UTEP, how difficult it is to come out and there is nothing waiting for you. You have to leave, and if you like El Paso and you want a better job, you have to leave El Paso. All the people I graduated with have left El Paso. They love it, but they can’t come back here because there are no jobs,” he said.

The military sector is another one of his focuses—more specifically on veteran’s welfare.

“I want to make sure Fort Bliss remains a viable force for our country, meaning no budget cuts so that they can remain strong,” he said. “I also want to take care of the veterans and look at the systems that are running the VA (Veteran Affairs), because with the system’s background and talking to the people that I’ve talked to, it is clearly a system problem, and I don’t understand why it hasn’t been fixed seeing that you need to streamline the process.”

Being an important element in his everyday job, Garcia also wants to bring his proposed immigration reform.