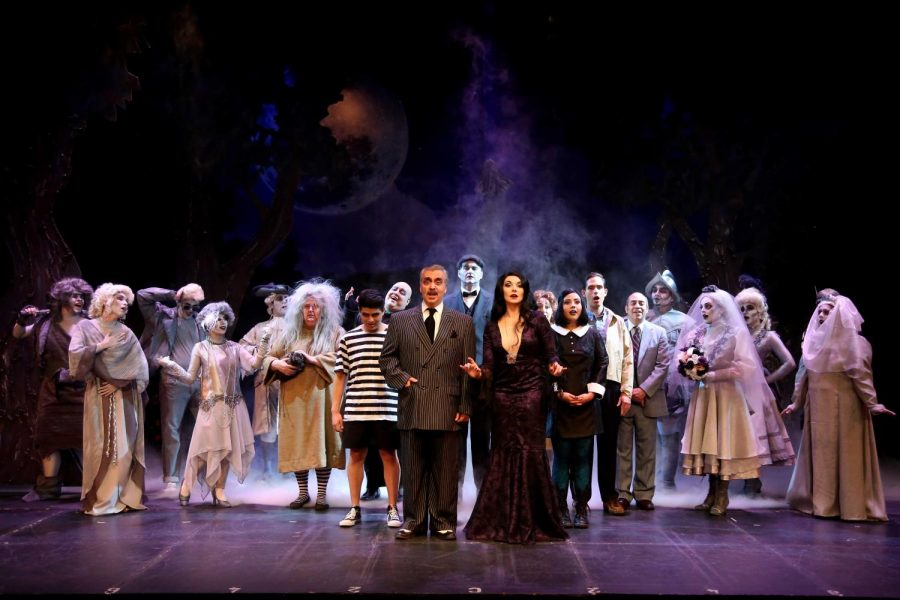 Despite the themes of “darkness, grief and unspeakable sorrow” that Morticia Addams mentions during a scene with her husband Gomez, the UTEP Dinner Theatre’s rendition of “The Addams Family” musical dazzles thanks to its commitment to comedy and some standout performances.

“The Addams Family” is an adaptation of writers Marshall Brickman and Rick Elice and musician and lyricist Andrew Lippa’s 2009 Broadway production. The musical bloomed after producers obtained the rights  to the eponymous comic strip in 2007 from the Tee and Charles Addams Foundation.

The musical tells the tale of the eccentric Addams family and their unusual familial interactions. Conflict arises when the anomalous Wednesday Addams, played by senior English major Lauren Pena, starts to fall in love with Lucas Beineke, a less idiosyncratic boy, played by Hugo Arreola.

She tells her father Gomez—played by Danny Lopez—to keep it a secret from her mom, Morticia—played by Josey Mitchell, doctoral student of teaching, learning and culture.

Hilarity ensues when the family of misfits tries to host a normal dinner for the Beinekes, with Wednesday’s secret starting to tear her parents’ marriage apart running parallel.

In terms of musical numbers, “The Addams Family” doesn’t rely on heavy prop usage, or inventive production tricks. However, the great chemistry between the characters and the witty, confident and organic performances make up for what otherwise feels like a safe-but-solid set of musical numbers.

For example, the second musical segment “When You’re An Addams,” which features all but three members of the ensemble, manages to showcase every character’s personality. It is impressive to balance that many characters on stage and establish a sense of relevancy for all of them with just one song. This is also was aided by stylish choreography, which even included an homage to Michael Jackson’s “Thriller.”

The production values are simplistic, but do just enough to keep the atmosphere immersive. The set designs, both interior and exterior, blend well with the symbolic use of shadows and spotlights.

One of the more meticulously crafted scenes inside Addams manor features fog and a more sinister color palette, as the family plays the game of “full disclosure.”

Pena is one of the early show stealers, thanks to an early soliloquy in which she starts to discover how her love for Lucas is changing her wretched personality. She questions whether she is now just supposed to like nice things such as puppies and her overall new brighter outlook.

Some of Pena’s scenes with Mitchell really strengthen the family dynamics, with Wednesday organically using the same mannerisms as her mother, further adding to the immersion factor.

Lopez delivers some of the better, surprisingly sober jokes in the whole production, with constant cracks at political alignment, bureaucracy and his sex life.

One of the more surprising performances is Ivan Cano as Uncle Fester. Fester acts as a play director and spiritual guide, who constantly breaks the fourth wall and interacts with the audience, while also delivering witty lines along the way.

Thematically, the musical takes a broad approach, but never loses sight of what it wants to convey and how it wants to do it. It normalizes crazy in the nonchalant delivery of ludicrous dialogue and the outrageous onstage antics of the family members. It offers social commentary on family stereotypes, such as the drunk uncle who watches football all day and the caring mother who loves cooking. It also explores the lunacy of love and how it offers an equilibrium to all the romantic relationships in the musical.

However, it also deals with heavier subjects, such as Morticia finding comfort in the suddenness and unpredictability of death as a problem solver, suggesting that she doesn’t have to deal with her problems because “death could just be around the corner.”

While the production values may not rival those usually found in previous Dinner Theatre productions, and while not all the musical numbers are memorable, the family dynamics between all the characters, the hilarious script complemented by consistently great delivery make “The Addams Family” a production worth checking out.