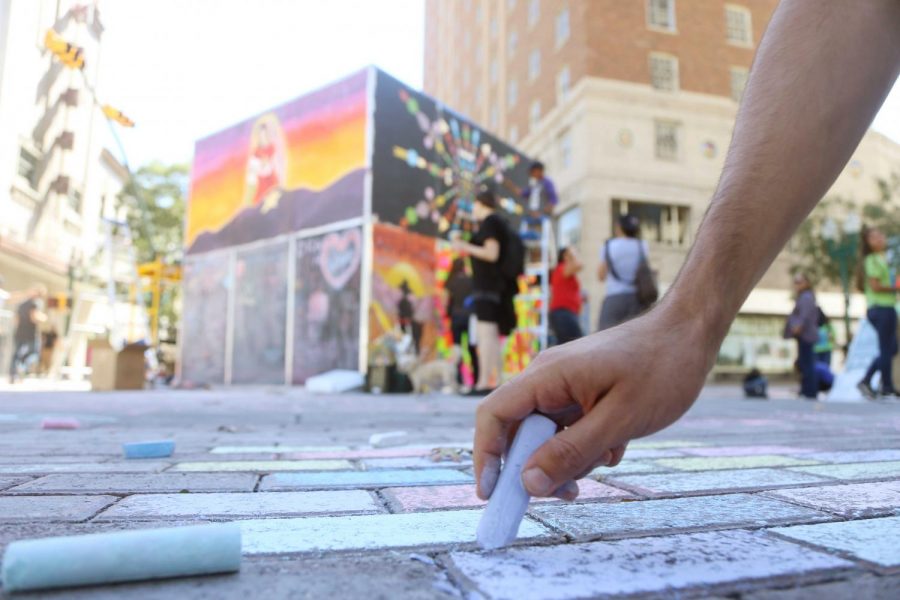 Chalk the Block, an annual arts festival organized by the City of El Paso Museums and Cultural Affairs Department (MCAD), turned downtown El Paso into a canvas of hope and inspiration. Local artists came together with national and international artists to draw and paint, and show the importance of art to those who aren’t connected to the culture.

Chalk the Block, which celebrated its 10th anniversary this weekend, was inspired by two artists who got the idea from a similar event they had previously attended in San Antonio. Once it came to El Paso, the event started as a one-day affair, with only one food truck, no music performers or installations and only seven sidewalk chalk artists.

The festival has become one of El Paso’s largest three-day events of the year and has grown bigger every year. It now showcases around 200 professional, aspiring and national artists who try to show the world to others the way they see it.

This weekend, the festival provided an opportunity for kids and adults to be part of the art community. Many took it as a chance to send out a message about their beliefs, while others decided to show their cultural pride and political stances.

Some of the art shown included characterizations of President Trump and a map of the United States, with words calling for unity among all people.

Others used it as a way to offer empowerment notes to each other such as “step inside for happiness” and “love yourself.” Hopeful messages were also offered to countries that were recently hit by natural disasters and to people that have been diagnosed with cancer.

UTEP alumnus Francisco Melendez was one of the showcased artists at the sidewalk chalk art competition. He uses his work to represent the LGBTQ community in Mexican culture.

“We’re getting more of a spotlight on here, and we’re getting to showcase the things that we worry about here in the border town,” Melendez said.

He feels that religion has suppressed people who belong to the LGBTQ community and he uses his work to show that they are people just like everyone else.

Interactive art installations such as “The Wishing Tree” by Yoko Ono and the “Life Cube Project” by Scott Cohen—both from New York—showcased art’s interaction with the community as they allowed attendees to connect with their dreams and wishes.

Cohen said that when someone writes down a dream that they have, it is more likely for them to actually work toward making it come true.

“I have been doing this since I was a kid, and I have accomplished a lot of things in my life. And I believe that that is a big part of the reason why is that I’ve been able to articulate what I‘ve been wanting to do and I set out to do it,” Cohen said.

In his 11th installation of the cube, Cohen offered a chance for local artists, students, street artists, the military and shelters to showcase their skills by painting murals and small canvases that represent the art of the El Paso community.

In the past two weeks, he went around El Paso talking to different schools about his story, the cube and how it started. His team then selected two artists to paint murals on the cube.

Ian Greene and his team from the Ysleta High School art department wanted the community to relate with the piece that they decided to paint.

In it, they show the Mexican-American culture since El Paso’s culture falls right in between both.

They painted a mural showing the Virgin Mary over the Franklin mountains with the U.S. flag on one side and the Mexican flag on the other side.

Chalk the Block allows the public to see the artwork being created from start to finish. They get to see the collaborative process and what it takes for the artist to finish a piece within hours, when it usually takes them days or months.

“Seeing the artwork being made, seeing what they go through and how they’re doing, it speaks to the people more than just seeing a finished product,” Greene said.

As the years progress, so does Chalk the Block, more installations and participation from the public gets incorporated for them to be able to enjoy more.

Marketing and Production Coordinator from (MCAD) Ismael Acosta said that the approach to future improvement is not focused on any specific area.

“We want to keep giving El Pasoans the opportunity to participate in everything we have to offer, so for the future I just really see us going to the future in every way” Acosta said.

The final head count for the 10th anniversary celebration was over 42,000 attendees.